The early morning sun emerging from the clouds brightens the narrow strip of land, which suddenly broadens and a house or two appear and then again narrows down to a three feet path. Birdcalls break the silence and different kinds of them flutter around. Surrounded on all sides by water and with estuaries curving into the land mass and mangroves weaving exotic pitch green patterns in the water and on the shores, it is an exhilarating visual experience. This is the island of Valanthakad in the Vembanad backwater, in the suburbs of Kochi, Kerala.

This unique eco-system is now threatened. It may vanish altogether or at least be marred beyond recognition if the project of Sobha Developers to setup a knowledge park, housing and commercial complex, multiplex, star hotels, IT research centre, oceanarium and a ropeway, comes through. 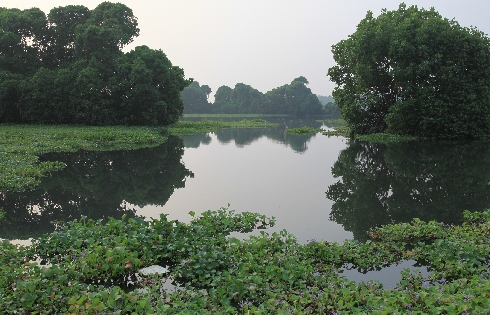 Mangroves weaving exotic green patterns in the water and on the shores in the Vembanad backwaters. Pic: Manilal Padavoor.

The Kerala State Biodiversity Board (KSBB) has strongly objected to the setting up of the High Tech City at Valanthakad and has urged the chief minister - who is also the chairman of the Single Window Clearance Committee constituted for speedy approvals of mega projects - to reject the project. Valanthakad constitutes a mangrove ecosystem comprising of 644 acres, the highest such concentration in the state.

Sobha Developers had signed a memorandum of understanding (MoU) with the Kerala government in August 2007 to set up the Rs.5,000-crore hi-tech city. As per the MoU, the company was to develop seven million square feet built-up area. The government, in turn agreed to bring the project under single-window clearance and to facilitate land development, limited land acquisition and environmental clearances, as well as provide utilities such as electricity, gas, water, sewage and communications.

The high-tech city is one of the four mega projects (Knowledge City, Kochi, a joint venture programme in Kozhikode with Grasim Industries, and an Integrated Township in Kozhikode are the other three) that have been short listed and submitted to the committee for clearance, following a decision by the state committee of the Communist Party of India, Marxist (CPIM), which leads the coalition, the Left Democratic Front (LDF), to speed up pending developmental projects.

There have been allegations from one faction of the party that Chief Minister V S Achutanandan is sitting on proposals citing environmental and population displacement problems. The CPI(M) has been riven by factionalism during the past years, Achutanadan leading one group and Pinarayi Vijayan, the state party secretary heading the other. Even though mostly personality driven, observers attribute certain ideological differences too. The Achutanandan group supposedly represents the 'conservative', 'ideology bound' Marxism, while the other group is seen to be more 'modern' and 'pragmatic'. The latter has a penchant for 'development' disregarding the human and environmental cost, and it is this group that alleges 'anti-development' trends on the part of the chief minister.

Furthermore, Achutanandans relegation from the politburo of the party and the strictures by the top committee to strictly abide by the party decisions is reportedly being used by interested sections of the party to get these mega projects approved. In the meantime, however, Binoy Biswam, Minister for Forests of the Communist Party of India (CPI) too has come out against hasty clearance of mega projects overlooking rules and regulations and shot off a letter to his partys national secretary asking for intervention in the matter.

The proposed project would violate a series of national and state laws, the note, by KSBB has cautioned the chief minister. These include the Coastal Regulation Zone notification, Kerala Conservation of Paddy Land and Wetland Act 2008, National Environment Policy, 2006, Kerala Forest Policy 2008 and the National Wetland Conservation Programme. The company has apparently acquired 320 acres of land including onetime paddy fields and vast fish farming lakes, according to the KSBB. But it is reported that the purchases have been made in the names of 18 different companies to overcome the Land Reforms Act. Hence the note to the chief minister points out that the project if given the green signal, will be in violation of the Kerala State Land Reforms Act, 1963, apart from going against the Kerala State Biodiversity Strategy and Action Plan, and the Ramsar Convention.

Valanthakad is part of the Vembanad backwater, which is one of the Ramsar sites and any such activities as has been proposed will be a gross violation and would lead to disastrous consequences, pointed out Purushan Eloor, an environmental activist and a member of the Environmental Protection Group (Paristhithi Samrakshana Koottayma) which had filed a PIL against the project in 2007. The case has hardly made any progress because of prevarication by the government, alleges Eloor, who is in his mid-forties. The court had issued notices to the state government and the state industries department. But the government has been delaying further progress by citing various excuses like the final project report is not yet ready etc.

Notwithstanding all the objections raised by the Kerala State Biodiversity Board, Minister of Industries Elamaram Kareem is quite confident that the High Tech City project will be given the nod without much delay.

94 per cent of the mangroves that was there in Kerala till the 1980s have been destroyed, according to the Board. Almost half of the backwater that surrounded Kochi is no more there and Valanthakad is the lone survivor with its rich bio diversity. 77 plant species and 27 water organisms have been identified here.

The report says in no uncertain terms that the destruction will be irreversible. It is just impossible to recreate the mangrove system elsewhere; biological science has not yet grown for such a feat. The KSBB notes that the biodiversity of the area is quite rich and it is a traditional waterfowl area attracting a large number of migratory species. The report goes on to say that the people of the area would lose the indirect benefits worth Rs. 77.28 crores annually. Dr V S Vijayan, chairman of the KSSB, clarified that this is the gross value of 14 eco-system services, like regulation of groundwater, that are invisible, but very much assessable.

Only 48 families live in the island now. Initially they had approached us too for buying land, says Chandran, a local man, who supports his family by fishing in the backwaters. None of the families sold out to the builder. We cannot even think of a life elsewhere, he adds. Sahajan, another island dweller confirmed that most of the land/water logged area were purchased from absentee landlords who had given up Pokkali farming (a unique practice of paddy cultivation in saline water) and fish farming. There is a ferry-a country boat- connecting the island with the mainland where many of the younger people study or work.

Notwithstanding all the objections raised by the Board, the Minister of Industries, Elamaram Kareem is quite confident that the Sobha City project will be given the nod without much delay. Responding to the questions on the views of the KSBB, the minister said in a press meet that the project would provide employment for 75000 people. He stressed that none of the existing rules needs be amended for this, instead relaxations in the existing rules could be offered.

When confronted with this, Dr Vijayan responded: If relaxations are made, then there is no point in having acts and laws. And this project is not for any public good. Instead its only for the profit of one or few individuals.

Even though Achutanadan has become less vocal and less forthcoming on various issues after the disciplinary action taken against him by his party, the Sobha City project is seen by many as an acid test of the veteran. It remains to be seen whether these troubled tracts will stay protected. (The Quest Features & Footage)

P N Venugopal is a independent journalist with The Quest Features and Footage, Kochi.

URL for this article
http://indiatogether.org/vembanad-environment