REVIEW: RECORDING THE CRUSADERS
Unearthing the nuggets
Down to Earth, a magazine of the New Delhi based Centre for Science and Environment (CSE) regularly carries stories of little-known men and women green crusaders. Compiling a number of those stories of struggle, CSE has recently published an impressive book. Darryl D'Monte reviews Agenda Unlimited, 2005.
08 December 2005 -

The Centre for Science & Environment (CSE) in Delhi has been ploughing a lonely but daring furrow for nearly a quarter of a century. It started off, under its visionary and charismatic leader, the late Anil Agarwal, with a feature service, which then morphed into its State of Indias Environment as citizens reports, as distinct from official tomes. These came out in 1982 and 1984 and blazed a new trail, marking out India as a brave new voice not just in environmental journalism but the green movement as a whole. 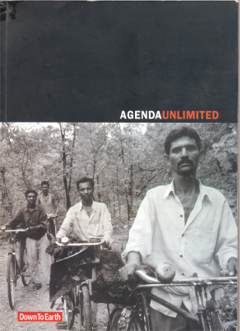 Meanwhile, Anil campaigned indefatigably to establish the CSE as a champion of the last man that Gandhiji always talked about. But, with his characteristic panache for the turn of phrase, he always used to say: In India, the last man is usually a woman. He meant, of course, that the burden of fetching the most precious natural resources  under siege with the relentless degradation of the environment  like water and fuelwood fell on the shoulders of women. He also pointed out that it was possible to redefine poverty in terms of biomass per head, rather than income (like the World Banks current definition of anyone living on less than a dollar a day).

In time, he and his fellow editor, Sunita Narain, brought out CSEs magazine, Down To Earth (DtE). Tragically, Anil contracted a very rare form of cancer and after battling it for several years, passed away. Sunita Narain has been cast (in iron!) in the Agarwal mould and has proved more than capable of picking up the gauntlet. DtE has been detailing stories of little-known men and women who have become green crusaders not as an antidote to depressing news and views that follow in their wake, as is the case with news magazines, but as the main dishes on their fortnightly menu. It has now wisely compiled them in an impressive book and categorized the struggles of ordinary, unknown people, with a sprinkling of well-known activists like Annasaheb Hazare in Maharashtra and Rajendra Singh in Rajasthan, according to the natural resource they are engaged in saving.

The sagas of grassroots people who havent ever made it to the media are in that sense far more revealing. The editorial team, led by the intrepid Sunita Narain, states that these are nuggets of inspiration in an otherwise bleak and increasingly filthy landscape. These they certainly are, and by assembling them in this manner, their contribution to this country is considerably enhanced: the parts are as great as the sum. There is still hope for this country, if people can surmount such tremendous obstacles to make a difference.

Thus, meet Bhagwati Lal Meena, the 46-year-old sarpanch of a village in Rajasthan who has provided a forum for farmers to voice their grievances against a mining company which was ruining the commons in the vicinity. The forum has succeeded in calling a halt to its depredations. Or K Abdul Rahman, crusader against the Grasim (Birla-owned Gwalior Rayons) plant in Mavoor, on the banks of the Chaliyar river in Kozhikode district in Kerala. He succumbed to cancer in 1999 but the struggle continued after his death. This agitation has gone down as one of the biggest ironies in the annals of Indias environmental movement. The undivided communist party in power granted the Birlas permission to put up the plant, which started functioning in 1963, on the mistaken conviction that this would usher in the states industrial revolution. With this in mind, it offered it bamboo as the raw material for pulp at a throwaway Rs 100 a tonne and water from the river free of charge, little realizing that these two most precious resources would be terribly degraded.

Or meet Munni, a housewife who works with the Bharat Patita Uddar Sabha, an organization of sex workers, formed by garage-owner Khairati Lal Bhola (presumably due to his engagement with truck drivers) to combat AIDS in Delhis red-light areas. Or the NGO Development Alternatives, which has been working out of its Tara Gram in Orchha in M.P. to generate gas as fuel from a local creeper. Or the Vankars, scheduled caste weavers and farm labourers who have transformed salt-encrusted wastelands into green acres through cooperatives in Bhal in Gujarat, incurring the wrath of their upper caste neighbours in the process.

These are all examples randomly selected from this stirring book. Down To Earth has done the country a tremendous service by bringing these unsung campaigners to the notice of the public. The editorial team has assembled the case studies in a very readable and accessible manner  each story, which originally appeared in the fortnightly, is dated, which allows the reader to place it in context. It is also well illustrated with pictures, which brings these characters to life.

It is not the sort of book one will read at one go, but more likely dip into from time to time. It provides invaluable reference material for academics as well as the uninitiated  the skilful editing making it comprehensible to anyone who is even remotely interested. There are indexes both of locations and organizations, as well as individuals names, which will prove very useful. Given the Supreme Courts diktat that environment has to figure in the school syllabus, Agenda Unlimited will certainly figure on the shelves of every school library. One presumes that there is a hardback, because the spine of the paperback is unlikely to survive constant thumbing.

URL for this article
http://indiatogether.org/unlimited-environment