Guardians of Sea Turtles
The destinies of the people of Kolavipalam village in North Kerala and the endangered Olive Ridley turtles are bound together. M P Basheer explores.
01 January 2003 -

The serene beautiful fishing hamlet of Kolavipalam in North Kerala has been in the news for a grassroots level effort to protect the highly endangered Olive Ridley turtles. For the last one decade, the villagers have been burning the midnight oil to ensure the survival of the turtles. The community effort thus started has now evolved into an initiative for total environmental protection of the area. The villagers are adamant to resist the threats posed by illegal sand-mining that damages the coast line as well as the nesting habitat of the turtles and the fisher folk's livelihood, at any cost. 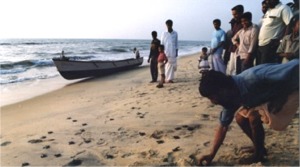 Some years ago, Surendra Babu, a local auto rickshaw driver, chanced to read in a newspaper about Olive Ridley turtles being an endangered species. He realised almost immediately that the turtles, which arrived at his native village of Kolavipalam every year, were the same species. Olive Ridleys have been coming to the beach for as long as Surendra Babu could remember. His first encounter with a turtle took place when one morning, before dawn, he and his father landed their fishing boat after a disappointing fishing trip. As they walked towards the village, they saw an Olive Ridley female ponderously returning to the sea, leaving a tell-tale trail of flipper marks that pointed to where, under the cover of darkness, she had buried her eggs. To compensate the poor catch of the day, we decided to collect the turtle eggs which were a rare delicacy at local menu, recollects Surendra Babu.

But the chance reading of the newspaper article changed all that. Surendra Babu and a few friends decided to help conserve turtles. They floated Theeram Prakriti Samrakshana Samithy, a movement which has been active for last 10 years. Their idea was simple. During the nesting season -- spread over five winter months, from November to March -- they patrolled the beach at night and early morning looking for turtle nests. The eggs had to be protected from predators, human and animal. So, freshly laid eggs were carefully dug out from their original nests and re-buried immediately in a make-shift hatchery. Fifty days later when the hatchlings struggled to the surface, they were gently released into the sea, more literally, towards their mothers.

The Olive Ridley turtle is a marine creature that grows up to three feet. A female Ridley lays 150-180 eggs at a time, and comes ashore under the cover of darkness. After 50 days, the two-inch long hatchlings scramble out of the deep pit, soon after high tide, at night. Hearing the sea, they begin to move towards the waves, tentatively at first, but within moments like it's a path they have traversed through generations.

Interestingly, ensuring the safety of the eggs are no hard-boiled environmentalists but a group of 12 local youngsters. While some of the group are fishermen, it also includes an auto rickshaw driver, a teacher at a private college, a boatman and a shop owner. Even after a hectic day of fishing or other daily-wage labour, the men wholeheartedly participate in searching for eggs in the night and early morning. They have collected as many as 167 eggs at a time. "The sea, the shore and the creatures along it are parts of our daily life. We don't have to allot specific timings for protecting them. Every day as a routine, we do that. It is our duty", says Vijayan, a fisherman who actively participates in the activities of Theeram.

Two or three groups go in different directions along eight kilometers of the beach searching for eggs. The State Forest Department has financed to construct a hatchery to protect them from being eaten by dogs and prevent them from inundated by seawater. Normally the female turtles lay eggs on the sand dunes beyond the high tide line. However, since there is no beach worth its name here the nests are laid wherever it is dry.

Every year the group released as many as 3000 hatchlings into the sea. Little surprise then that they came to be called "The Turtle People". Their activities gained support of the local community when the young men explained the villagers that the eggs they consumed contained an endangered species. Since then the villagers have stopped eating turtle eggs. The news of the conservation programme spread rapidly. An informal network of sympathisers brought news, and sometimes even the eggs, of a nesting event miles down the coast

The turtle people feel a sense of pride that the Olives have chosen their beach as a nesting ground. They believe that Olives inevitably return to the beach where they were born, to lay eggs. "The number of hatchlings we have released into the sea has been increasing every year. We dream that one day our beach will see a mass nesting. Maybe in another twenty years. But who knows if this beach, or even this village, will still be here," wonders Suresh Babu, the president of Theeram.

There is good reason for this sense of doom. The beach at Kolavipalam was over a kilometre wide not many years ago. Today it has been reduced to a narrow strip, rapidly shrinking. The village which is nesting ground of the turtles as well as the home for some 600 people faces a grave threat from the illegal sand mining activities in the near-by Kottappuzha estuary. Due to the indiscriminate quarrying of sand from the coast the sea erosion rate has reached at an alarming level. Theeram activists fear that if the illegal sand mining continues at the present rate, there would hardly be any area suitable for turtle nesting. "Sand mining poses severe threat to our narrow coastal area which has just 500 meter width. All the hatcheries we built since 1998 have been destroyed by sea erosion. Every year we lose a stretch of our coast, says Satheesan a private college teacher in the village.

Every day tonnes of fine sand from the sandbank are taken away to be used for construction work, land-filling, and so on. The sea, in turn, carries away sand from elsewhere and re-deposits it in a desperate attempt to maintain the sandbank. Consequently, every year, the sea eats yet another portion of Kolavi's beach, slowly and inexorably making its way to the village.

Theeram activists filed a case in the Kerala High Court five years back to prevent the illegal sand mining. The court ordered to appoint a committee to study the matter and the committee recommended restricted mining. Despite the court order illegal mining continues unabated. "We had many bitter experiences as we try for environmental protection. Once, the sand miners attacked four of us in the sea with weapons. We had to jump out of the boat into the sea and some how escaped. They caught one of the activists and took him to their place and badly tortured him, says Sajeevan, a fisherman in the group.

The people are clear about their demands. "Stop the sand mining, and save our beach," they say. "The turtles need the beach to nest. If it disappears, they will find another. But what happens to the people? If the village is swallowed by the sea, where will the people go?" asks Chiruthakkutty, a village woman. The struggle to protect Olives has now grown into a struggle to preserve the existence of the village, and its resources. Turtles still occupy centre-stage -- the night vigils, collection of eggs, release of hatchlings, education programmes continue -- but the villagers know they cannot isolate conservation from their right to a livelihood. Everybody calls us the turtle people. But it is not we who are preserving the turtles, it is the turtles who have provided us a platform to voice our protest, the turtles who will preserve us," says Suresh Babu.

Several inputs for this report were contributed by Chrysalis Films, makers of the film The Turtle People. Write to Chrysalis at chrysalis@vsnl.net.

URL for this article
http://indiatogether.org/turtker-environment