All down saar
Tsunami relief in Tamilnadu may have taken on an altogether unexpected colour. Some villages escaped the giant tides, and yet in Shanmuganagar, villagers destroyed their homes, when the tsunami itself did not. Why? "We were scared, and they promised us a new house," finds Dilip D'Souza .
17 October 2005 -

The two vessels have water in them. They also have small fish, each a few inches long, in them. Thangaraj and Muthulakshmi squat beside the vessels with their little son Dhanas and work the fish. They reach into one vessel, pull out a little silvery body, scrape the scales off and drop it in the other vessel.

Why did you tear down your own house, I ask Narayanswamy. "Sir, the others were all doing it," he shoots back.

•  Not that lucky
•  The memory of a memorial
•  Betrayal of survivors

This is dinner, in preparation already under the late afternoon sun. I watch for a while, then ask, where is your house? "We don't have one now," says Thangaraj. "For 40 years, we lived in a house there" -- he points to a sort of flatter, harder area in the expanse of sand around us -- "but we tore that down some months ago." Was it damaged in the tsunami, I ask -- though only for the record, since I already know the answer. Thangaraj looks at me as if I was stupid. "The water didn't come up to our houses!" he says, and isn't that obvious? After all, Shanmuganagar is a good kilometre from the shore.

Well, then why destroy their house?

Thangaraj shrugs. "We were scared, and they promised us a new house."

And on this third visit to Shanmuganagar, I can see that promise bearing fruit. There are at least three brick and concrete houses coming up. Thangaraj expects one like that will be built where his 40-year-old house once stood.

Yet on this third visit to Shanmuganagar, I still cannot understand why he would, and did, tear down that 40-year-old house. I still haven't figured out who "they" are. Something happened here, and I'm still not sure I know quite what it is.

The first time I visited this sandy Tamilnadu village was just days after the tsunami, and all the huts were empty. The wave did not come up to the huts, true, but it did barrel all the way in to about 50 metres short of the village. Several people from the village told us how they had set out fishing that morning, then ran home in screaming terror. At least two women died. Traumatised by that experience, all the villagers had moved to little sari-and-pole shacks they had erected on the sandy slope just adjacent to their huts.

On my next visit, six months later, the flimsy sari shacks were gone. But the villagers had not moved back into their huts. In fact -- and this is where my puzzlement began -- the huts were all gone too. Flattened. Disappeared. As if they never were there. The sandy slope had a neat clutch of thatched huts. Dotted around the village were more of the same. Those huts were where the villagers now lived.

But what happened here? Why were their homes destroyed?

65-year-old Narayanswamy explains. Some man everyone calls Thatha, or grandfather, a foreigner he thinks is from Sweden, has been coming here through some organization to help them after the tsunami. (Yes, Narayanswamy is just as vague as that). The help is welcome, because other than this Thatha, nobody will recognize Shanmuganagar as a tsunami-affected village in the first place. The wave didn't touch the village, remember? So who cares that some from here were out fishing that December morning and the wave killed two? Who cares about the great fear that drove the villagers into those sari-draped shacks? 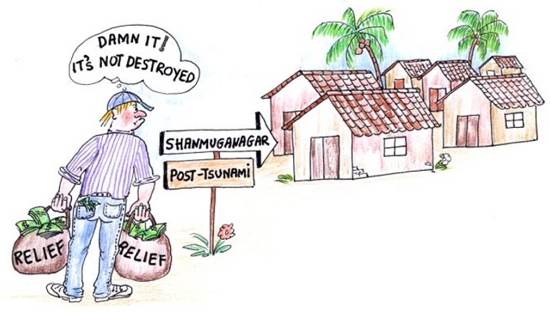 In any case, this Thatha told them that he would build them new homes. And the villagers agreed.

But Narayanswamy has lived here for over 50 years, and clearly remembers building his own house. "We made this place ready", he tells me, stressing that word "ready" to drive home what an effort it had been to build in this sandy spot.

There were 62 houses in all in this ready place. All lived in for decades and therefore, relatively robust by now. On the Thatha's suggestion, the villagers themselves destroyed those homes after the tsunami, and moved into temporary thatched shacks. Chalk markings show me where Thatha's new houses will rise from the sand.

I'm baffled. Why did you tear down your own house, I ask Narayanswamy. "Sir, the others were all doing it," he shoots back. "Do you think I could have stayed there alone, when all the other houses in my village were gone?"

Fair question, though not quite the answer to mine.

Just behind where he and I are talking, there's a balwadi in operation. The young woman in charge, S Radhika, leads the kids in a rousing rhyme for our benefit. It goes thus: "Ring-aa, ring-aa roses / Pocket illa boses / Hussa, bussa / all down saar!" 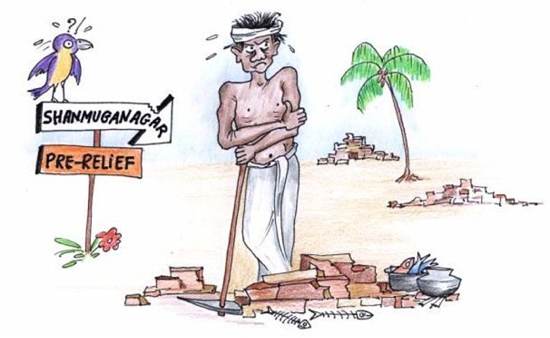 And they all fall down. The kids, that is. Well, the houses too.

So on my third visit, two months later still, I run into Thangaraj and Muthulakshmi. Looking up at me as they clean their fish, they tell me that after pulling down their house, they were allotted the shack beside us as temporary shelter until their new house comes up. So you sleep there at night? I ask. "No," says Thangaraj, a slow smile spreading across his face, possibly he senses my puzzlement. "We sleep out here. Except if it rains. Then, we sleep in there." He points to the shack.

Why outside? "Because the engineering is inside there", Thangaraj tells me. Meaning, the men building Thatha's new houses here, with all their equipment. Sure enough, if I bend at the waist I can see that there are some men in the shack, backs to me, eating late lunches this afternoon. I can see piles of equipment.

No less baffled than on my previous trip, I have a whole slew of questions. Why are there are new houses being built here when none were damaged? Why did Thatha want the old ones destroyed? Who is this mysterious Thatha anyway? Really, what on earth happened here?

Clearly my Tamil is inadequate, because Muthulakshmi seems to think I'm asking about what happened on that terrifying December 26. She starts to tell me: out fishing, water came, we ran ... then she suddenly stops, and also stops cleaning the fish.

URL for this article
http://indiatogether.org/tsuhouse-op-ed