SKILL DEVELOPMENT – II
The skills journey: A long history but no destination in sight

In the second and concluding part of his exposition on India’s skill development efforts, Shambhu Ghatak traces the journey under the UPA and NDA governments, only to find that while the thrust remains the same, the end is far from sight.

It is not that skill and training have been given high priority by the government for the first time under the current regime. Underlining the importance of skill development and vocational education, the 12th Five Year Plan (FYP) document informs us that while falling labour force is a major concern in most industrialised countries and also China, India has the benefit of a demographic dividend because the age structure of the population ensures that the labour force will be growing.

It is a different matter, however, that the Planning Commission, which prepared the plan was replaced by the NITI Aayog as soon as the NDA came to power. Nevertheless, the importance of the 12th FYP document cannot be ignored.

The 12th FYP, which was prepared under the United Progressive Alliance in its second term (UPA-2), emphasises the need to connect the Skill Development Mission with market demand. The document mentions that in order to ensure that skills match demand, employers and enterprises must play a vital role to play in the conception and implementation of vocational training programmes, including managing Industrial Training Institutes (ITIs) and in the development of faculty.

The FYP document also calls for an enabling framework that would attract private investment in Vocational Training through Public–Private Partnership (PPP). The importance of harnessing the respective strengths of public and private sector entities engaged in skill development is underlined. Other areas of focus that the plan document spells out include mobilising the required investments, setting up first rate ITIs, ensuring efficiency in operations and management and enabling post-training employment.

While these were considered the primary responsibilities of private sector entities, the government was also envisaged to play a role in providing an enabling framework and the requisite financial support, especially in respect of Scheduled Castes, Scheduled Tribes, minorities, differently-abled persons and other deprived sections of society.

The plan says that skill development programmes should have backward linkages with school programmes and forward linkages with industry and other service sectors who can be potential employers of skilled manpower. It urges enhancing access to higher education by creating two million additional seats for each age cohort aligned to the skill needs of the economy.

In short, skill shortage was identified as a major constraint for attaining the growth of the manufacturing sector. It would, therefore, not be an exaggeration to say that the NDA is following in the footsteps of the previous UPA government for attaining higher growth by imparting skills to India’s labour force.

However, the 12th FYP embarked on a relatively modest target of skilling 80 million people until 2019, which leaves around 400 million people to be trained in the 13th FYP by 2022, according to the 4th Annual Employment-Unemployment Survey Report 2013-14 of the Labour Bureau.

Despite the capacity of skill development programmes being just 3.1 million during 2009, the National Skill Development Policy (NSDP) of the UPA set a target of skilling 500 million people by 2022, which was a much higher target than that set under the Skill India Mission of the NDA.

Among other things, one of the operational strategies of the NSDP was to ensure availability of public institutions above the high school level, which would offer training after class hours for skill development. The other strategy was to create a National Vocational Qualification Framework (NVQF) with an open/flexible system, which would permit individuals to acquire and build on their knowledge and skills, and convert them through testing and certification into higher diplomas and degrees.

The NSDP (2009) also addressed the need for strengthening the skill base of the unorganized sector so as to improve productivity, working conditions, labour rights, social security and living standards.

As per information accessed from its official website, the National Skill Development Corporation (NSDC) was set up as a not-for-profit public company under section 25 of the Companies Act, 1956 in 2008 (under the UPA) with the approval of the Union Cabinet, with the objective of increasing the skills training capacity in the country. It started with a capital base of Rs 10 crore, intended to encourage and synchronize private sector initiative in skills development.

The overall objective of the NSDC has been to create training capacity, fund scalability and sustainability of private enterprise, create a market ecosystem for skill development and meet the targets set out by the Government. The NSDC's mandate was to train 150 million people by 2022.

The National Skill Development Agency (NSDA) was notified through a gazette notification dated 6 June 2013 under the UPA. It is an autonomous body of the Ministry of Skill Development and Entrepreneurship which coordinates and harmonizes the skill development efforts of the Government and of the private sector, to achieve the skilling targets of the 12th Plan.

It also endeavours to bridge the social, regional, gender and economic divide by ensuring that the skilling needs of the disadvantaged and marginalised groups are taken care of through the various skill development programmes and by taking various forms of affirmative action as part of advocacy by the NSDA.

The Union Cabinet chaired by Prime Minister Narendra Modi on 2 July 2015 gave its approval for an institutional framework for the NSDM, in keeping with the commitment made during the Budget Speech for 2015-16. The NSDA, the NSDC and the Directorate of Training were envisaged to work under the overall guidance of the Mission.

The Training and Apprenticeship verticals, comprised of the entire network of Industrial Training Institutes (ITIs) and Apprenticeship Training schemes were transferred from the Ministry of Labour and Employment to the Ministry of Skill Development and Entrepreneurship (MSDE) on 16 April, 2015. In its press release dated 2 July 2015, the NDA government claims that these changes have paved the way for a new skilling ecosystem, with closer coordination across the public and private sectors.

However, as can be seen from the previous paragraphs pertaining to the 12th FYP, NSDP, NSDC and NSDA, the joint involvement of the private as well as the public sector in imparting skills to the labour force was emphasized even by the UPA government.

Critics have argued that just as NDA's Swacch Bharat merely signified a renaming of the earlier Nirmal Bharat programme, Skill India Mission is similar to the NSDP initiated by the UPA. 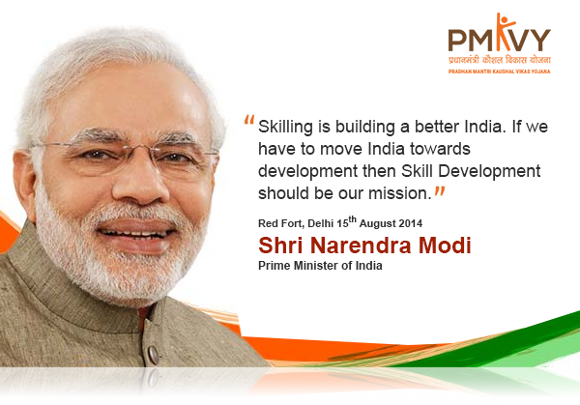 One of the banners of Skill India Mission. Pic: nsdcindia.org

Although a separate Ministry of Skill Development and Entrepreneurship has been created by the NDA Government for policy, coordination and capacity building through various related programmes, the Ministry has been allocated only Rs. 1543.46 crore in 2015-16 under the Union Budget, which comes to around Rs 12 per head.

A piece written by Sourjya Bhowmick for CatchNews.com (dated 16 July, 2015) and titled Skill India: Is Rs 1,500 crore enough to train 40 crore Indians? says that out of Rs. 1543 crore allocated to the Ministry of Skill Development and Entrepreneurship, nearly Rs. 1350 crore has been earmarked for Kaushal Vikas Yojana, which aims at training 24 lakh youth and paying them Rs 8,000 after completion of their training. However, the scheme does not ensure employment.

Why skills alone will not matter?

The government needs to recognize that apart from shortage of skilled labour force, there exists a dearth of economic opportunities. The Economic Survey 2014-15 informs that employment elasticity of economic growth has declined from about 0.35-0.44 in the 1990s to nearly 0.2 in the 2000s. Labour absorption is a major challenge today due to the jobless growth that has occurred.

The Economic Survey 2014-15 says that aggregate employment growth, which was above 2 percent in the 1990s, has declined to between 1.4 and 1.8 percent in the 2000s according to both the Census and NSS. If the government encourages capital-intensive projects, the scope for employment of skilled labour (apart from unskilled ones) will be further reduced.

There is thus a need to create effective demand in the domestic economy as the country cannot rely on just exports for economic growth in the face of an ongoing global recession.

While many questions have been raised regarding implications of foreign direct investment (FDI) for the local economy, employment and environment, the FDI route has often been sought and favoured for placing India on the high growth trajectory. Unless transfer of technology takes place, which spills over as knowledge and technical know-how to domestic firms, opening up of the economy may lead to monopoly in the market, argue critics.

Prospects of transfer of technology appear even bleaker in the context of the Prime Minister assuring Western nations in his visits about India’s commitment to intellectual property rights, without acknowledging or adhering to the country’s existing IPR regime. This has implications for economic growth and, therefore, employment.

Amartya Sen speaks to Sonali Campion and Taryana Odayar at LSE on 6 November, 2015,

Govt. needs to take a realistic view of skilled manpower,

Budgetary allocation for Ministry of Skill Development and Entrepreneurship in 2015-16,

Shambhu Ghatak is a researcher on development issues such as food security, employment, livelihood security etc. He works with the Inclusive Media for Change Project.

URL for this article
http://indiatogether.org/the-skills-journey-economy