DISABILITY
Tech to the aid of autistic children
Recent research has shown that computer/digital technologies can help children with autism (and other disabilities) learn and communicate better. A computer training workshop for parents and children was held recently at Bangalore. Shuchi Grover reports.
06 June 2007 -

Following from the success and lessons from their first-of-its-kind experimental workshop in Dehradun where they explored the use of technology to help kids with autism, Dr Arun Mehta and his colleague Vickram Crishna of Radiophony, recently concluded a similar but bigger workshop in Bangalore. The workshop, titled "Computer Training Workshop for children and young adults with Autism Spectrum Disorders (ASD)" ran for 5 days (26-30 May 2007) at the facilities of the Spastics Society of Karnataka. It was organised jointly by the Autism Society of India (Dr Veronica Mathias), the Spastics Society of Karnataka (Dr Nalini Menon), and Radiophony, with sponsorship and volunteer help from IBM. The participants included about 17 children of various ages with autism, their parents, special educators, and volunteers. 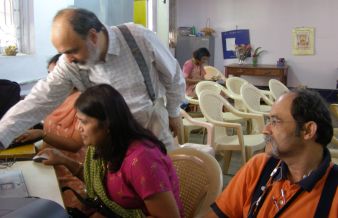 What transpired in the 5 days were several informal sessions of discussions between the parents and resource persons about the needs of children with autism with respect to communication and expression, and the hindrances presented by the traditional computer with monitor, keyboard and mouse for input and output. Mehta and colleagues shared various software and hardware by which children could communicate with the computer through non-traditional means. Also shared were several other software tools such as a 3-D and role-play software developed by C-DAC, simple visual programming environments such as Scratch (recently released by MIT Media Lab), simple image and audio manipulation using everyday Windows software, and Edubuntu  a free and open source Linux-based operating system designed specially for children that comes packaged with several child-friendly games and educational software.

This experimental workshop was inspired by recent research in the West that has shown that video modeling and other computer/digital technologies with multimedia features can play a useful role to help children with autism (and other disabilities) learn and communicate better. Children with autism in general have trouble with human interactions and are often unable to express their feelings. The assumption is that using the computer to type (or just use gestures or mouse movements with Dasher software) would help them communicate with others through computers.

Further, it is known that several children with autism suffer from sensitive eyesight which makes it difficult for them to tolerate the computer screen glare. The Jaws software that is developed for the visually impaired could be used to deal with this. Several children with autism are non-verbal, and software like eLocuter will help them verbalise their thoughts and feelings and help them communicate using audio.

However, little has been tried out in India and Mehta and his colleagues are treading boldly through uncharted territory. Their experiences with the eLocuter software that they developed for the renowned scientist Stephen Hawking, and subsequent work with teaching, and software for, the visually impaired have made this team well suited to help children with autism and other disabilities through the use of technology. With few people savvy enough with computer technologies in the field of learning disabilities in India, such workshops have never been conceived of. As a result, there were families who had traveled from as far as Chennai and Mumbai to be a part of this workshop in Bangalore.

Hands-on sessions with facilitators at hand ensured that each parent left with enough knowledge to make a start with using these tools with their child based on their child's specific needs and condition.

The workshop started out with an objective to work with parents and children themselves (to the extent possible) and use some appropriate technology, to help the children communicate and learn better. But the larger number of participants and varying needs of each child came in the way of such one-on-one sessions. That said, hands-on sessions with facilitators at hand ensured that each parent left with enough knowledge to make a start with using these tools with their child based on their child's specific needs and condition.

Parents also left with CDs of all the software that was discussed and shared during the sessions (most of it is freely downloadable from the Internet anyway), and a commitment to stay connected through online groups and email exchanges about their experiences with the software. The workshop thus proved to be an eye-opener for the parents and special educators present, as they were exposed to a wide range of software and hardware options to help autistic children communicate and express themselves.

Some of the software discussed and shared at this workshop are listed below.

 Natak - a role-playing and drama-making software from C-DAC.

 Jaws - software for the visually impaired (and for children with autism who have a problem with screen glare)  which features audio feedback for keyboard input and a screen-reader for audio version of everything on the screen.

 eLocuter  software developed by Mehta which enables the computer to "talk" on behalf of a non-verbal user and allows the user to give computer inputs through one key.

 Dasher  software for keyboard-less typing which allows a user to type using only mouse movements (without clicking). Advanced versions of the software also allow typing through tracking of eye-ball movements.

 Scratch - a fun, iconic, simple introduction to programming which allows a child to explore shapes and develop computer animations and games with much ease.

 Edubuntu - a complete Linux-based operating system, (freely available with community based support) specially for children - packaged with tons of educational applications and games.

Most or all of the software shared and discussed is free and open source. Mehta is planning to customise eLocuter with specific vocabulary lists of everyday words for children.

The quality of the follow-up exchanges in the coming weeks and months, and the feedback that Mehta and Crishna receive about the usefulness (or not) of the software and other tools shared will be a true measure of the success of this one-of-a-kind workshop. It may also determine the nature and format of similar future workshops in India.

Shuchi Grover is an alumna of the Harvard Graduate School of Education with a specialization in Technology in Education. She is a Bangalore-based education consultant, and was a volunteer and facilitator at this workshop. Shuchi is currently involved in networking parents and educators in India through an online forum called educatorslog.in. You may read more on autism and learning disabilities posted by this community at educatorslogin.com/tag/Autism.

URL for this article
http://indiatogether.org/techtools-health