KERALA
The unique water tunnel of Sheni
This 250 metre-long suranga, situated by the side of a school in Kasargod, Kerala resembles the famed Iranian water system - the qanat - more than its other counterparts in the district. Shree Padre reports on its passing out from regular use.
18 January 2009 -

A ninety year old suranga at Sheni, 35 kilometres from Kasaragod, quite distinct from others, might be of interest to historians and researchers. Being used until the last season, it had served both as a suranga and an open-well.

Surangas are traditional horizontal man-made caves for water. Kasaragod district in Kerala has an estimated 6,000 surangas out of which majority are still in use for drinking water and irrigation. 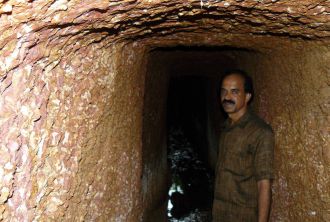 Unfortunately, no information is available about the history of Kasaragod surangas. They resemble qanats of Iran. While qanats are thousands of years old, surangas don't seem to have their origin before one or two hundred years ago.

The qanat, according to some researchers, is an extensively Iranian invention since 7th century BC and it later spread to other parts of the world. In Iran, there are about 50,000 qanats today. Although many of them have damaged as a result of drilling of deep wells over the years, a great number of qanats are still use throughout the country. City of Tehran got its water supply from qanats till recently. The combined length of these qanat systems is 272,000 kms. The longest one is in Gonabad district in Khorasan province and stretches to 70 kms!

The structure of a qanat is as if a series of tiny open wells are interconnected by a horizontal tunnel below. Points out researcher Mohammad Baqer Liyaqati of Iran, "By drilling a chain of wells at equal intervals from the foothills of the mountains to the plains below and by connecting them below the surface, they built these subterranean canals. His technique, although it appears simple, was an engineering feat of those days when people did not have modern machinery. It was simply their ingenuity and keen sense that helped them exploit water resources with the help of simple tools." Qanats are present in Afghanistan and China as well. In China they are called as Karez.

The suranga at Sheni, approximately 250 metre long suranga, situated by the side of Shri Sharadamba High School resembles the qanats more than its other counterparts in the district. While digging very long surangas, it was practice to dig tiny well like structures starting from inside the suranga and opening at the top of the hill surface. These structures, called air vents helped in two ways. For one, they provided fresh air for the suranga diggers to breathe and continue their work. Secondly, they provided them some extra sunlight from outside. A very small number of Kasaragod surangas have such air vents. 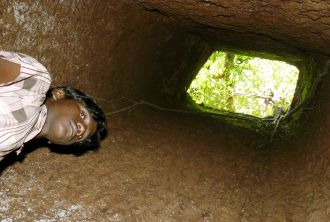 One can get down to suranga or go up to the surface through these steps. Pic: Shree Padre.

The Sheni suranga has seven such vents, a few of them have served as open wells as well. Anybody who sees the land surface here won't believe that just twenty feet below, a plentiful water source could be there. The topsoil is a black coloured hard laterite cap that is extremely difficult to dig out with a pick-axe. This land belongs to the headmaster S Ravindranath Nayak's family. According to Ravindranath, his late grandfather Linganna Nayak had had this suranga dug 90 years ago, when the latter was 16, for irrigating the betel nut gardens.

Apart from providing water for irrigation, in good old decades, this was the only drinking water source in this surrounding. About 30 families were drawing water with the help of a pulley and rope from the 'wells' emanating from the surangas. Recalls S A Abdullah, 53, "When I was young, even in summer, water equal to a coconut tree stem was flowing in this suranga."

Local people call all these vents as wells only. Each well has a protective wall constructed with rough stones. Water was being drawn from three wells, of course, with the permission on Nayaks. These families must be drawing around 10,000 litres a day from these wells. Even after that, it used to provide water for irrigation. That much water resource in a suranga is pretty rare.

Instead of straightaway diverting the run-off water, it could be filtered and fed to a newly constructed percolation well nearby. This will help maintain the water in the suranga and its cleanliness too.

One can easily walk inside the suranga from the open end. Since it is very close to the school premises, cricket ball falling into these wells is of common occurrence. "As such, many of our students who learn here enter the suranga at one time or the other though we admonish them not to do so", points out a teacher.

The intriguing aspect here is the reason for digging seven vents. It appears that they did so to easily take out the dug out soil outside. Surrounding each well, one could make out traces of fresh soil that once seemed to have been heaped upon here. Some of the wells have small dug out steps in their walls. These would permit skilled persons to get down to the suranga through these steps and vice-versa.

More interesting is how they could so faultlessly align the suranga and wells in one row? Did they start digging the wells first and latter interconnected them through the suranga or whether the suranga was dug first? If suranga as dug initially, from where did they start the work of the well? If from the top, how exactly did they pinpoint the location of the two feet wide suranga below without any mistake? Of course, digging upwards from inside the suranga seems o be another possibility. But that is easier said than done! No doubt, the illiterate labourers of that time had a special skill or engineering wisdom that is lost with the passing time. 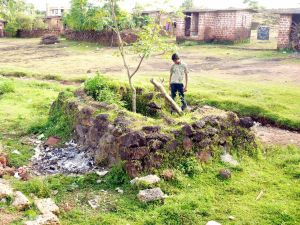 This well connecting the sub-surface suranga was used till recently. Pic: Shree Padre.

With the changing water scenario, this suranga is slowly being relegated to history. Realizing that the water table is going down, Nayaks had had bore well dug about 7-8 years ago. Now that bore well caters to their irrigation requirements. Government bore wells and hand pumps have also come to the village.

Even now though, the suranga has water. A few families are taking that water in a pipe for their drinking water needs. After the arrival of bore wells, run off from the nearby area is diverted into the suranga with the help of a trench. As a result, all filth, plastic waste, etc., into this water body. This deterioration has stopped the handful of families from drawing water from the suranga well. They too have started using bore well water now.

Instead of straightaway diverting the run-off water, it could be filtered and fed to a newly constructed percolation well nearby. This will maintain good water source in the suranga and its cleanliness too.

For the moment though, students studying in the local high school get to know more about this traditional water body, sometimes because of their escaping cricket ball or though their neighbours. This is good in itself. The Sheni suranga deserves to be maintained and developed as an example of our ancestors' rare engineering feat.

URL for this article
http://indiatogether.org/suranga-environment--3