The July-August fury has returned to haunt the tribals in the Narmada valley, as the controversial Sardar Sarovar Project (SSP), Narendra Modis Pride of Gujarat, steadily diminishes the hopes and shatters the lives of hundreds of people in Madhya Pradesh and Maharashtra. And this time, it has come with more vengeance. Hundreds of villages are deluged; thousands of people are clamoring for a foothold on the land they inherited for centuries along the submergence area of the SSP. Roads have been snapped. Four jeevan-shalas (schools) run by the Narmada Bachao Andolan (NBA) in the villages along the river have reportedly perished. Hundreds of acres of farms have been gulped. Several houses built by the people themselves dont exist any more. Yet, the reverberating cries of people demanding resettlement dues are much less heard of.

After years of royal promises, surveys and re-surveys, the Maharashtra and Madhya Pradesh governments havent been able to rehabilitate all the people of the villages already submerged or about to be. The governments are still counting the exact number of families to be displaced by the dam, which has touched a height of 110 metres. This time, again, despite aware of the danger of submergence lurking on these villages, the state governments could not shift its people to safer places before the onset of monsoon.

Trapped in the valley, the ravaged oustees are facing the odds of unheeding governments and the ferocious backwaters of the dam, hoping against a hope. The Pawra, the Bhils, and many other tribal and non-tribal communities in the valley are determined to stay put until they are resettled, notwithstanding the dangerously rising waters of the Narmada. They rely on agriculture and the forests.

Heavy rains in the upstream areas were one reason for the rising backwaters. But the NBA claims that the sudden and calamitous rise of the backwaters was triggered by the stoppage of release of water in the Narmada Main Canal from August 3 owing to a major breakage of the Canal wall near Bhorda village in Pavi Jetpur Taluka in Gujarat. It was from that date that the water level in the reservoir went up quickly. By the morning of August 6, the NBA activists say that the dam was overflowing. According to the activists, in three days, the devastation wrought by the flooding was irreparable and unprecedented.

Philip Mathew, a NBA worker says that the main canal broke at Bhorda and Motiauni villages in Pav Jetpur Taluka due to strong pressure from the floodwaters of the Heran river. The floodwaters designed to flow under the canal to the western side, started impounding on the eastern side due to silt blockage in the passage, denting the canal. It deluged several villages like Bhorda, Motiauni and Rajbodeli causing huge losses to the people in terms of destruction of standing crops and houses, according to the reports. 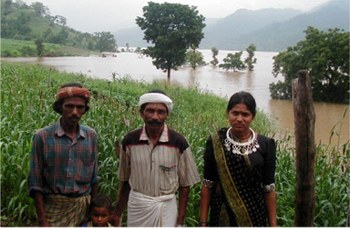 Bava Muhariya (center) with his brother and daughter in front of his field in Jalsindhi of which part was totally submerged and rest flooded in 2002. Pic: L S Aravinda (files)

But in the valley, the villages began perishing in the rising water from August 1, one by one. Manibeli, Dhankhedi, Chimalkhedi, Bharad, Domkhedi, Nimgavhan, Bilgaon and Bhadal and many more on Maharashtra side; Jalsindhi, Anjanwara, Bilgaon, Kakrana and several others in Madhya Pradesh. All these villages have been drowned. The schools at Manibeli, Bharad, Bhadal and Danel have also been deluged in these past few days. When the waters recede at the end of monsoon, most people come back. This year, a few have moved to rehabilitation sites.

The Uma Bharati-government hasnt still reacted to the state-driven calamity at all and things look bleak for the oustees. Though that state has the largest number of the people hit by the submergence, the Uma Bharati-government is not taking any cognizance of the tragedy at all, the NBA says in its recent statement. Hundreds of oustees from Anjanwara and several other villages in Alirajpur block in M.P. met the Resettlement officer besides a host of other officials at Kakrana on August 10 to check the lists of beneficiaries and found large-scale discrepancies and fundamental flaws. Names of over 1000 people have not been included as oustees, the NBA charges. And like their brethren in Maharashtra, the Madhya Pradesh people are preparing once more for arduous struggle for their rights and resources, ahead.

Maharashtra has responded, but not beyond the usual rescue operations. The government had to summon all its force to pack the would-be oustees into make-shift sheds up on the hills in the valley. The local administration reportedly moved as late as August 10 when the damage had already been done. That too after NBA leader Medha Patkar and scores of tribals launched a sit-in agitation in Shahada in Nandurbar district.

According to the NBA spokespersons and activists, who had began aiding the people much earlier since the month of June: All that the Maharashtra police did was to arrest the people in some villages and cramp them in dingy and wet sheds with water running ankle deep. Their condition is still miserable. Many others havent been removed to safer places yet. Forget medical aid, scores of villagers are facing shortage of food. Diseases have plagued the tots. And the situation is only getting worse.

Cannot measure, cannot manage State governments are still counting the exact number of families to be displaced by the dam, which is now at a height of 110 metres.  •  Narmada: life, struggle and exodus

The oustees are acidly annoyed over the governments callous neglect towards and lack of empathy. As NBA activist Ashish Mandloi notes in his statement: While the villagers in Bharad had to fend for themselves, the policemen were enjoying the plight of the people or relishing a game of cricket in Nimgavhans rain-ravaged fields along the valley. The ensconced government babudom in Maharashtra is yet to provide any boat or launch for re-establishing access to the trapped people.

Maharashtra government has not been shy in claiming that all people have been shifted to safer places and rehabilitated. Agreeably, Nandurbar district administration has begun the process of purchasing the cultivable land for the resettlement of the oustees who did not earlier figure in the list of beneficiaries. But only just. The government had promised to complete the rehabilitation in Vadcchil in Shahada tehsil of Nandurbar much earlier. But smitten by the bureaucratic delays and lassitude, the process only got delayed.

While people in the valley were pushed to the brim, Medha Patkar and hundreds of protestors began their agitation in Shahada ostensibly to wake up the administration. In June, Maharashtra Minister for Resettlemen Patangrao Kadam had assured the NBA that it would sort out the issue of the families left out of the list of beneficiaries, and rehabilitate the people on a war footing. The NBA has since long been protesting the exclusion of hundreds of families from the official data of the oustees. The government has excluded many inhabitants from the list of oustees saying that these families dont figure in the revenue records. The NBA has been fighting for their resettlement. And the government finally bowed to this demand last year, ordering fresh surveys to be conducted to identify all such families and rehabilitation to be done.

The movement has been bitterly critical of the Maharashtra Governments abject failure to keep its promises. Despite the ministers orders, the process of declaring the affected villagers as oustees didnt start. The local administration, which was supposed to assess the situation and identify the left out families, was sluggish about the task assigned by the Minister. So, while the swirling waters started engulfing the villages towards the end of July, the officials were still to procure the land for even the already identified oustees, this  despite the fact that the evictees had chosen the lands at Vadchhil and Jawada in Shahada tehsil, almost a week before the agitation began. 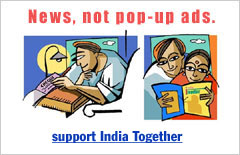 The administration did not disburse the cash compensation for the losses the people suffered due to submergence in the last five years following delay in their rehabilitation. Because, as the Akkalkuwa officials reportedly maintained: We had not received any written orders from the higher-ups. People have realised the Government was yet to buy the land at Javda to resettle them. The Rehabilitation Secretary, K.S.Vatsa, reportedly told the NBA during a meeting that the orders to buy the land were issued some time ago. But the land could not be bought because there were standing crops on it. The process was to start the same day.

Meanwhile, the Prime Minister, Dr Manmohan Singh, will be launching the hydro-power component of the SSP at the dam site soon. The NBA has appealed to the PM to visit the valley to assess the situation of the oustees independently. The fateful submergence in the Narmada valley has destroyed the lives and resources of thousands of tribal and farmers families. The Prime Minister, who is committed to the human face of development, must not legitimize such a project based on large-scale repression and outright violation of human rights and thereby legitimize the misdeeds of the infamous governments of Narendra Modi in Gujarat and Uma Bharati in Madhya Pradesh. Besides, the hydro-power units are so insignificant that they could hardly produce 30 MW of electricity", contends Medha Patkar, the NBA leader.

URL for this article
http://indiatogether.org/sspupdate-human-rights