EDUCATION BUDGETS
Funding at a snail's pace
All the increased budgets for education in the country may not amount to much, if the States don't move the money fast enough to the intended uses, which is not happening now. Himanshu Upadhyaya reports.
09 August 2012 -

Thus even if delays were at the minimum end of these ranges, it would take more than a month for money to travel from state capital to a school! Assuming the worst at each level, it could take two and a half years! The logical corollary to such prolonged delays is that funds remain unspent with the District Education Officers and Inspectors of Schools. It was found during audit scrutiny in two test checked districts that Rs 5.37 crores and Rs 25.26 crore were lying unspent with DEOs and ISs.

A similar performance review in Assam brings us even more shocking news. In that state, schematic and other funds to the extent of Rs.304 crores were lying unspent/undisbursed with the Department of Elementary Education as well as in seven districts in the form of DCRs/Bank Drafts/Bankers Cheques in the current accounts of the DDOs for periods ranging from three months to 33 years!

The audit scrutiny in Assam also revealed abnormal delays in releasing the 1st and 2nd installments of Sarva Shiksha Abhiyan funds, ranging from 42 to 216 days both by the Union and State governments. In Assam, it was also found that the SSA Mission indulged in a dodgy accounting practice - to show funds as spent as soon as they were released to districts without taking into account the funds lying unspent at the district level! This resulted in a mismatch between the state expenditure on the books and actual expenditure on the ground. Those maintaining accounts at SSA had also paid no attention to check why despite significant short releases of funds, there remained huge unspent balances.

In Jammu and Kashmir, for the years 2006 to 2011, the CAG review revealed that 32 to 72 per cent of funds were released by State Implementation Society to Chief Education Officer (District level) at the fag end of the financial years. Similarly delays in the release of funds by CEOs (District level) to ZEOs (Sub-district level) ranged between 24 to 354 days. The review of Sarva Shiksha Abhiyan in Manipur shows us that there were delays ranging from 9 to 327 days in the transfer of central funds to the state authority, and similarly there were delays ranging between 110 days to 254 days in the State transferring its share to the mission (whose costs are shared between the Centre and the States). 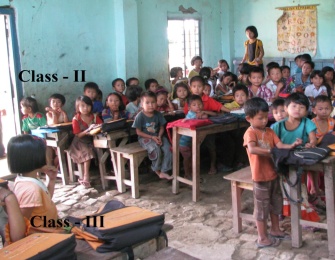 The second installment of annual SSA funds is released only after the state government has transferred its matching contribution to the first installment. If one is delayed, therefore, there is compounding of the delay by withholding the other! (Pic: Around 70 children in three different grades share this single classroom in Bishnupur, Manipur.)

There is more bad news. In Tripura, the CAG found the mid-day meal scheme funds were not withdrawn and disbursed by the Inspector of Schools, compelling the institutions to run the scheme on credit for months together, which raises doubt on the quality and proper implementation of scheme by schools. Audit scrutiny also showed that 300 schools could not provide the meals at all for anywhere between 1 and 11 months during 2010-11.

A recent PAISA report that tracked the receipt of SSA grants says that in 2008-09, only 64 per cent of schools reported receiving their grants. the next year, it improved to 74 per cent but again dropped back to 66 per cent in 2010-11. In some months during the study period the figures were as low as 24 per cent.

As if these things are not bad enough, there are delays of another kind, which the CAG's review does not talk about. These are delays in the transfers from the Union government under SSA grants. In a working paper on Sarva Shiksha Abhiyan, the Centre for Budget and Governance Accountability (CBGA), a civil society watchdog writes that the Union Government usually transfers funds in two installments to state governments - once in April and then again in September. However, the second installment is released only after the state government has transferred its matching funds. They also argue that the first installment itself is usually delayed, making the schools that are planning pre-monsoon repairs desperate for funds.

CBGA's working paper states that as against the ideal two installments, Chhatisgarh had received funds in eight installments in 2004-5, seven in 2005-6, six in 2006-7, and five in 2007-8, with the major share of transfers happening at the end of each year. CBGA also found during fieldwork that delays in transfer of funds were common at sub-district levels also. In Dongargaon block of Rajnandgaon district, CBGA's team found that the money came to the block in 19 installments in 2006-7, and 27 installments in 2007-8, making it an ordeal for block level officers to manage this fund flow (receiving and disbursing money) rather than spend quality time on monitoring programme implementation.

Similarly, CBGA's paper notes that in Uttar Pradesh because of the time taken for funds to move from one level of government to another (from state project office to District and then to Block) most of the money got disbursed to the intended recipients only in the third and fourth quarters each year. As an example, money meant for a Block Resource Centre was released by the State Project Office in August 2007, but the District Project Office Lalitpur released the money in February 2008.

Even worse examples could also be found. The performance audit of SSA in Manipur reported that during audit scrutiny of the District Project Office, Ukhrul it was found that grants for Chingai block amounting to Rs 7.71 lakhs for the year 2009-10 were released in the third quarter of 2010-11.

And sometimes, money was transferred without the letting recipients know why they were getting it. For instance, the SSA Mission credited funds to bank accounts of SMCs without intimating their intended use. Most SMCs came to know about receipt of funds when they turned up for updating bank passbook (thereby letting funds lie idle in banks for days!) CAG auditors also notes with a concern that most SMCs were maintaining a single cash book in which all transactions were entered and since many of them failed to furnish expenditure vouchers, it was impossible to check proper utilization of funds received under major interventions.

It seems there are so many different ways in which the funds flow is failing that there is little hope of their proper utilisation to achieve the goal of the education system - to teach children. Instead, officials and teachers alike are merely going through the motions of transferring money, with little attention paid to the enormous time lost in making these transactions. And in the process, for millions of children across the country, an education delayed is becoming an education denied.

URL for this article
http://indiatogether.org/slomo-education