NEW INITIATIVES
Humble jackfruit eyes haute cuisine status
Of the abundant quantities of jackfruit grown in India annually, an estimated 70 per cent rots away, due to lack of awareness and difficulties of usage. Now, a joint initiative by an academic institute and a farmers' group seeks to change that. Shrikrishna D reports.
23 July 2013 -

Sixty seven-year-old Prema Bhat Thottethodi, a farmer woman, was restless. Leaning on a walking stick, she was busy running around in the massive kitchen. Age and her knee-ache couldn’t deter her spirit. Later in the day, she stole the show by demonstrating many ‘unknown’ preparations.

The event was unique and saw an unusual reversal of roles. The passionate lady performed with the ease of a professional. Result: a wide range of products - from roti, payasam, sukrunde to jelly - all from jackfruit. The audience was awe-struck.

It was a rainy day in the second week of July at Mangalore, Karnataka. The one-dayer titled ‘The versatility of Jackfruit in cooking’ was organized by Nitte group’s Sarosh Institute of Hotel Administration (SIHA) and Chowtara Chavadi Krishi and Sanskriti Vedike, Miyapadavu - a farmers’ group. Adike Patrike, a farm magazine campaigning for jackfruit development was another organizing partner. Among the audience at the SIHA conference hall were black suit-clad future cooking professionals - students of hotel administration.

Though jackfruit was familiar, none had a hint of its versatility. The objective of the unique programme was to introduce its numerous possibilities to cooking professionals.

This was for the first time in the country that a serious attempt was made to woo chefs towards jackfruit. How did the new idea strike? “Only traditional users use jackfruit for cooking now,” explains Dr DC Chowta, farmer and convener of Chowtara Chavadi, “If its use has to be augmented, we have to introduce it to up-market hotels and restaurants. For this, it is essential to convince the cream of chefs about jackfruit’s potential.”

The name jackfruit is derived from the Portuguese word ‘jaca’ that originated from Malayalam ‘chakka’. Jackfruit (Artocarpus heterophyllus), the largest tree-borne fruit is a native of the Western Ghats of our country. With the exception of the Kashmir region of Jammu and Kashmir, it is perhaps grown in all Indian States. However, no reliable data on its area and production are available. It is highly likely that India might be the numero uno in the world’s jackfruit production.

According to one source, India grows 14,36,000 tonnes of jackfruit in 1,02,000 hectares. However, very sadly, an estimated 70 per cent of our crop ultimately rots away. According to East Garo Hills district (Meghalaya) Deputy Commissioner Vijaykumar Mantri, jackfruit worth Rs 434.89 Crores gets spoiled there. If this is the case of one jack growing district, what would be total loss of the country that has a minimum of 75 such jackfruit dominated districts?

Decades ago, when rice was unaffordable, a good number of families used jackfruit as staple. In coastal Karnataka and Kerala, it is still described as ‘poor man’s food’, though a good many poor men have lost interest in it.

With the new generations shifting to fast food, the traditional use of jackfruit has come down considerably. Harvesting and cutting this thorny fruit, made more complex with its latex, is the main reason that people keep away from it.

“Added to that”, points out Suneesh C.D., an activist of Uravu, an NGO in Wayanad that works for jackfruit development, “people in Kerala and Karnataka look down on jackfruit. Unless this mindset is removed consciously, there won’t be considerable progress in the field of this fruit.”

Ironically, whenever threat to food security is debated among policy makers and in administrative circles, only rice and wheat are considered as food. Jackfruit doesn’t find a place as a source of food.

Chowtara Chavadi Krishi and Sanskriti Vedike of Miyapadavu have been conducting Jack Fests at Miyapadavu, a rural centre since 2011. This year, they changed their strategy and took it to Mangalore city. Students from Host College and from Motimahal College of Hotel Administration were present in the programme. Chowtara Chavadi brought jackfruits and cooking experts from their village to make the event successful. In the end, it turned out to be a successful programme in partnership between the farmers and colleges.

The biggest curse of jackfruit is the toil involved in cutting and pulling out its bulbs. This requires both patience and skill. A six-member team of Chowtara Chavadi worked for a good three hours to complete the task. It was really a rare sight to see the ‘tradition-followers’ and representatives of modern culinary styles working together to prepare the dishes. The products rural experts made were jackfruit dosa, roti, bajji, genasale, changuli, sukrunde (from jackfruit seed), halwa and jelly. The College team came up with preparations to suit the modern urban palate, such as jackfruit pizza, mousse, burger, shrikhand and flambe, cocktail and mocktail. Dhanya Menon, Head, Production Department of SIHA led the college team. For the lunch, all except rice were jackfruit preparations.

“I didn’t know that so many preparations are possible using Kathal (jackfruit). It appears as if it has infinite uses,” quips a visibly mesmerised Maneesh Rathod, a fourth-year BHM student at SIHA; “I have been offered a job in a leading 5-star hotel of Gurgaon after completing this course. Jackfruit is available there. I will certainly introduce a few kathal recipes to Gurgaon.”

Rajesh Singh, another North Indian student of the same batch gets another idea. “Since last year, we have had to work on many projects. For this, many a time, we find it difficult to identify a subject. Jackfruit alone can be ideal for a number of projects.”

What impressed Larissa Rodrigues, third-year BHM student of Motimahal College of Hotel Administration is that jelly that could made from what is normally considered to be the waste from jackfruit.

“Today’s is a process of sowing seeds in young minds to generate newer and newer ideas for the future” - this is how Indira, Principal SIHA interpreted the novel programme. “This is only a beginning”, she added.

South India grows a bulk of jackfruits produced by the country. Forget star hotels, even smaller ones don’t touch jackfruits for any of their preparations. A major problem is the cumbersome work involved in cutting, scooping out the arils and making the jackfruit ready for cooking. However, despite the difficulty, in Mangalore, Shrirama Lunch Home of Bhavanthi Street is popular for jackfruit preparations during the season. They have been making Jackfruit gatti, idli, dosa, pattoli, modaka and kottige during the season, for four decades now. Hotel Pattumudi Janata deluxe and Hotel Ayodhya are two others that offer jackfruit preparations. 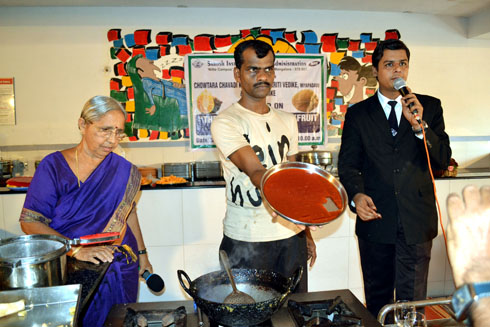 The Sarosh programme had attracted two chefs from Bangalore’s Taj Gateway, a 5-star hotel belonging to Taj group. “We have decided to conduct a jack fest in our hotel. It was with this plan we visited the Sarosh College programme”, says Ganesh Sheregar, Chef de Party of Taj Gateway. CGH Earth, another 5-star hotel group from Kerala has already been making jackfruit preparations for a few years now. In 2011, they had even organized a jack fest. Jose Varkey, its corporate chef is a staunch jack-lover. According to him, “The problem is in harvesting and getting the right kind of jackfruit on our table at the right time. Cutting & cleaning is the biggest hurdle. Unless these issues are addressed, it is difficult for jackfruit to enter our top hotels.”

Machaan Restaurant of Mumbai also hosted a jack-fest a few years ago. Though the going was very good, they had to stop it suddenly. Reason: Not getting jackfruits in time! Lumiere, a specialty organic restaurant of Bangalore conducted a five-day fest in this May. In all, they offered 98 jackfruit preparations. It was an instant success.

There are two possible ways to solve the hotel industry’s biggest headache - making jackfruit ‘Ready To Cook’ (as a vegetable) and ‘Ready To Eat’ (as fruit). Such efforts have recently taken off in Mumbai, Mangalore and Bangalore, albeit in a very small way.

Developing linkages between hotel chefs and farmers’ groups through Self Help Groups is another possibility. This can ensure that chefs get the right kind of raw material at the required time and also in ready form. However, efforts in this direction are yet to be started.

Using preserved jackfruit, especially during off-season could be another good option. Such products, though new, are now available in a few areas of south India. These would come in handy for hotels to make preparations round the year. For example, tender jack in canned form is being produced in Maharashtra by Pawas Canning Company in Ratnagiri. Jackfruit pulp, packed in retort pouches are being released in the market by Konimsfurti, an institution from Kudal, Maharashtra. Dehydrated unripe carpels (arils), dehydrated tender jack, unripe jack carpels in brine are other products made by farmers groups elsewhere.

Yet another possibility is getting fresh raw jack from distant areas. Bangalore gets fresh tender jack supply for nine months a year. Jackfruit is available round the year in Panruti of Cuddalore district in Tamilnadu. These examples only show that with proper effort, developing a reliable supply chain is possible.

Gearing for the future

The SIHA administration is excited at the success of their first ever sensitization venture on Jackfruit. They have now decided to bring out a CD containing videos of selected recipes and a recipe book - both in English.

Hopes B.R. Hegde, Correspondent, SIHA, “if we get collaborating farmer groups like Chowtara Chavadi to help us with raw material, pre-processing and ideas, we would be happy to do more Jackfruit programmes in future, in a better way. On a regular basis, self-help groups can produce such ethnic jackfruit preparations and supply it to hotels and canteens, just as they supply idli, chapathi and other fast-moving preparations.”

Shyamalamma, Asst. Professor at the University of Bangalore, involved in Jackfruit research and development, is happy to hear the initiatives to sensitise the hotel industries about jackfruit. Says she, “If the hotel industry accepts and starts using jackfruit for diverse preparations, it will open up enormous scope for its utilization in our country.”

“In just a day, we have been fully convinced about the versatility of this fruit,” admits Dhanya Menon, adding that it has very bright prospects. What is lacking is popularity and awareness. Indeed these are the areas where the real challenge lies. Jackfruit activists and development agencies have to strive hard for popularity and greater knowledge to ensure that the country’s most neglected fruit gets its deserved status.

Is our horticulture and NHM (National Horticulture Mission) top-brass listening?

URL for this article
http://indiatogether.org/siha-agriculture