WHOSE WATER?
One state, but divergent demands
Integrated river management is a serious business, and without proper attention can lead to politically difficult situations even within a single state, as seen in Maharashtra this year. Parineeta Dandekar reports.
10 December 2012 -

Reservoir storage levels in the Marathwada region of Maharashtra, consisting of eight districts, are scary. Of the 11 dam projects, six have a live storage capacity of zero, and two others have single digit storage levels. One of those is the huge Jayakwadi Dam on the Godavari, which supplies drinking water to four Municipal Corporations and over 200 villages; it had a mere two per cent live storage on 26 November this year. While a weak monsoon, and upstream dams in Nashik and Ahmednagar districts are to blame for this alarming situation, there is a bigger problem of management at the heart of the issue.

After Jayakwadi was completed in 1976, numerous medium and large dams came up in the upstream Godavari. Many dams on the Pravara and Mula basins and Darna Dam cluster have been built after the Jayakwadi project. These dams intercepted and diverted flows away from the Jayakwadi. All was well in surplus or normal years, but in a year with deficit rainfall (like the current one), Maharashtra is on the threshold of perhaps the worst intra-state water protest that it has seen.

The Jayakwadi dam supplies drinking water to Aurangabad, Paithan and Jalna, Beed, more than 200 villages and Maharashtra Industrial Development Corporations (MIDCs) including the 1130 MW Parali Thermal Power Plant. For the past few months, Aurangabad has been facing massive water shortages, with water being supplied once in three days at times. The Government Medical College and Hospital in town had to postpone surgeries due to water scarcity. The Chief Minister has made it clear that sufficient water cannot be supplied to Parali, and Maharashtra should brace itself to more power cuts.

The poor storage in Jayakwadi didn't happen overnight, nor is this the first time. For the last decade, the dam has not been filled to its capacity due to scanty rains and upstream projects. This year, Marathwada has received a poor rainfall; since September there have been protests, with people demanding more water from the upstream dams. But so far they have been denied.

Things went from bad to worse after October, as water cuts became more and more pronounced in Marathwada. There were increasing protests in Aurangabad, in which all political parties participated, demanding more water releases from upstream dams. This was vehemently opposed by the upstream regions - Nashik and Ahmednagar. It was only after the CM intervened and ordered 9 thousand million cubic feet (TMC) of water to be released to Jayakwadi from a number of other dams in Nashik and Ahmednagar that water releases actually began.

As expected, the announcement and subsequent releases faced stiff protests from political parties and farmers in the upstream regions. In case of Mula Dam on Pravara River in the drought-prone Ahmednagar district, farmers groups did not allow water release for an entire day and actually stood in the river as water was released into the river channel, threatening to drown themselves. The irrigation department then reluctantly yielded, making one irrigation rotation through the canals for this region. Interestingly, only 1.55 TMC was released from Darna Dam in Nashik, which was 92 per cent full on 26 November 2012. 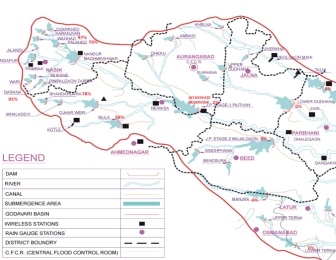 This year, Marathwada has received a poor rainfall; since September there have been protests, with people demanding more water from the upstream dams. (Pic: Map of the Godavari basin, showing the major dams - click to enlarge)

For these water releases, although within the same state, tremendous security checks were put in place. Hundreds of police were deployed, the gates of KT weirs were forced open, canals and river banks were constantly patrolled to curb lifting, and to top it all, the electricity to the region was cut off to prevent electric pumps in the region from siphoning off water as it flowed past. Though some people believe this was needed, it is indeed shocking and saddening to see this. There were numerous protests at several places. Water sharing within the state has reached a new level of mistrust and hostility.

Lest we forget, Maharashtra holds the distinction of being the first Indian state to have promulgated a law, the Maharashtra Water Resources Regulatory Authority Act, in 2005, establishing a new institution. This was at the behest of World Bank, under its Maharashtra Water Sector Improvement Project (MWSIP). The Authority was explicitly created "to meet the pressing need for an institutional mechanism to regulate the allocation, management and utilisation of the state's limited water resources through a participatory approach".

Some relevant provisions of the MWRRA Act (2005) include:

These provisions have been completely violated in the Godavari basin this year. The MWRRA has entirely failed to meet its explicit mandate and most important social role. Even now, it is not taking any proactive steps to try and put things in order, to give some semblance of integrated river basin management.

Ironically, when there were strong protests in Aurangabad over water releases, MWRRA was in Aurangabad holding meetings on water tariff proposals, not on this pressing issue! This is the same institution that is being put forth as an example to be followed throughout the country. The State Water Authority formed under the MWRRA has not had a single meeting since the formation of the authority! A strait-jacketed institutional structure, imposed from outside and working with a top-down and unaccountable manner, and with no perspective, has been simply unable to take any equitable, participatory and useful decisions.

The limited water releases made till now in the Godavari basin from dams upstream of Jayakwadi have happened because of direct political orders, and not by the MWRRA or the Godavari Marathwada Irrigation Development Corporation (which was supposed to have a water allocation plan for the entire basin). This is indeed a very serious issue, with far reaching implications. Water scarcity will intensify in the coming months, and unless basin authorities take timely and proactive steps, it will not take much time for a protest to become a movement.

For decisions to be backed by upstream or downstream communities, the composition, the mandate and functioning of such an authority would have to be participatory, transparent and accountable. Unfortunately, this is not what the MWRRA ever aimed to be.

In the Krishna basin, a similar situation is emerging, where the Ujani dam on the Bhima River, the third largest reservoir of Maharashtra and lifeline for Solapur city and numerous villages, had only 7 per cent water in live storage on 26 November 2012. Similar to the situation in Jayakwadi, upstream dams in the Pune region have much higher storages, ranging from 81 to 95 per cent. But here too, there has been strong opposition from the upstream communities to any release of water for downstream users, and here too the MWRRA has been unacceptably silent.

What makes the situation more alarming in Ujani is the extremely poor quality of the water, due to untreated sewage from upstream Pune. It seems clear that soon this situation will get more volatile, as here the competing users are the politically influential urban areas of Pune and Pimpri-Chichwad in the upstream, and an equally strong and politician-backed sugarcane lobby near the dam.

In case of both Ujani and Jayakwadi, the dams have huge dead storages - water that is stored below the level of the lowest outlet, which cannot therefore be used in normal operations - and some experts, including senior officials of MWRRA, have argued that the dead storage can be used for drinking water supply. But there is no policy or mechanism to achieve that. Aurangabad Municipal Corporation has been contemplating installing common head-works at the Jayakwadi dam, to utilise the dead storage there for drinking water and industrial purposes, at an estimated cost of Rs.106 crores. The scheme is yet to take off, however.

The irony is that the Godavari basin is considered a surplus basin, as per the National Water Development Agency's calculations. Andhra Pradesh is building huge projects to transfer water from the Godavari to the Krishna basin. How are such projects sanctioned when the upstream of the same basin is in such dire straits? No one knows the answer.

India's massive water infrastructure, the biggest in the world, has been put up at a huge social, economic and ecological cost, but even the presumed benefits from such large decisions have proved illusory in many cases. The Jayakwadi dam submerged 118 villages and displaced 70,000 people when it was completed in 1976. It is time to review and reconsider the existence, dimensions, functioning and usefulness of such dams. And to make sure that the ones that are still needed function in more responsive, efficient and equitable manner.

URL for this article
http://indiatogether.org/share-environment