The Salt Stories is an 84-minute documentary by filmmaker Lalit Vachani; it is a longer version of a 52-minute film, In Search of Gandhi, selected by Steps International as one of ten international films included in a global broadcast of TV documentaries on democracy. The film places the Mahatma's historic Dandi March in perspective, juxtaposing it against the reality of the depriveations faced by the poor - of their basic needs like food, clothing and shelter.

The most remembered, perhaps, of Gandhi's non-violent opposition to British rule in India is the Salt March to Dandi, where he disobeyed the infamous Salt Act that denied people the right to make their own salt. The year 1930 began with a pledge for Independence. In March, Gandhi announced that he would launch a civil disobedience movement by breaking the Salt Law. He walked from Sabarmati Ashram to Dandi, a village on the coast 400 kilometres away to make salt on the beach there.

Seventy seven years later, Vachani and his Wide Eye Film team followed the trail of the famous Dandi March, in search of Gandhi's legacy. Set against the backdrop of Gandhi's original journey, this road-movie makes caustic comments, simply through telling visuals and direct one-to-one interviews with a cross section of people, on how globalization of Gujarat equates Gandhi's 'salt' to a metaphor on poverty, forced migration, joblessness and injustice. 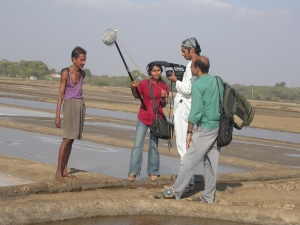 Vachani had earlier too brought glimpses of the this question to his audiences. In The Men in the Tree, he briefly dwelt on RSS attitudes to Gandhi - shedding light on how he is often denigrated and neutralised, but also at times appropriated by the Hindu right as and when it is convenient for them to use, misuse or abuse his name. The Salt Stories is a larger examination of this world, in part.

There is also another side to it, as Vachani sees it. Has Gandhi's non-violent means to attain a political end for the benefit of the entire country really brought freedom to all their descendants, especially the poor and the oppressed? Or, have events like the Dandi March been reduced to a token for non-violence, relegated to history textbooks? "I decided I wanted to do something about Gandhi in Gujarat," says the flimmaker. "Initially, I was not very clear about what to focus on and how to go about it. Over a fairly long process of research, I decided to make a road-movie documentary that followed the trail of Gandhi's salt march."

"I decided to call the film The Salt Stories because in the historical context in which Gandhi launched his march, `salt' becomes a metaphor, a symbol for issues of livelihood. I saw our journey as one that sees us tracking contemporary stories about livelihood in India on the trail of Gandhi's salt march." Vachani shot the film over 24 days in early 2007. The post-production work took place in two phases, the first for In Search of Gandhi for six months until September 2007, and thereafter another 4-5 months for The Salt Stories.

The film opens with black-and-white archival shots of the original Dandi March on a totally silent track. It then cuts to the present with the focus on Mohammedbhai, leader of the Sabarmati Citizens' Committee, standing in what remains of his bangle factory where the number of workers has dwindled to a handful because his machines and his workshop were destroyed by Hindu fundamentalists during the 2002 riots. He talks about the tragedy of his life post-riots. The film crew then set off on the rickety road to Dandi via small towns on the way, talking to people, asking whether they remember Gandhi and if they know anything about the Dandi March. A few do, including most notably 102-year-old Gordhanbhai Bakhta, the sole living survivor from that momentous event (he passed away a few days after the filming).

Along the way, glimpses of India's continuing deprivations appear and the struggle to overcome them appear. Ketanbhai, Dalit sarpanch of Navagam village, asks his group to hold aloft a banner on blood donation they had arranged in their locality, for the shoot. Later in the film, we are told that he was forced to resign his position because high caste members did not allow him to go on.

The film meanders through time and space, intercutting the present with the past, with archival footage in Black-and-White and without a soundtrack, courtesy Gandhi Films Foundation in Mumbai. This gives the film a sense of history, putting time, place, people and events in perspective and setting values old and new, against each other to give an objective view of how relevant the salt march is in today's India.

The most remembered, perhaps, of Gandhi's non-violent opposition to British rule in India is the Salt March to Dandi, where he disobeyed the infamous Salt Act that denied people the right to make their own salt.

Shots of Ellis Bridge, once crowded with people watching Gandhi leading the march, come across in archival stock footage intercut with shots of the present, in colour, where people live in shanties under the bridge. They lament the perpetual uncertainty of their lives open to the constant threats from politicians, land sharks, the police and the state administration who would all rather build shopping malls or spanking new market places here. "What will we do with shopping malls when we do not have food to eat?" asks a poor man who worked as carpenter but is presently without work.

One wrinkled old woman tells the filmmaker of her faint recollections of the Dandi march as a little girl; she points to a shanty in a crowded slum where Gandhi rested for a night. But at once she is silenced by a younger woman who lives there, fearful that if the place's connection to Gandhi were too widely publicised, it might be turned into a memorial to the man or the march, and she might lose the only roof above her head. The moment is poignant. Almost eight decades after the symbolic demand for freedom that was made along this route, the real India still can't 'make its own salt', metaphotically speaking. The freedom is in name only, having absolved everyone of any responsibility for protecting livelihoods once the British were driven out.

The twin to this malaise portrayed in the film is secularism, or more correctly the absence of it. The film clearly points to this without articulating it expressly. Throughout the journey, the film unfolds a strong undercurrent of hate towards the Muslims among the Hindus in Gujarat. Youngsters lazing around without work or education are vociferous in their verbal attack on minorities, but there is no rhyme or reason to their opposition; it is simply ingrained. Young people marching with Narendra Modi masks covering their faces as an electoral strategy underscores the magic wand Hindutva wields in the state.

Vachani is dismayed by this. "This open and blatant antipathy towards Muslims that comes out in the film disturbed me deeply," he says. "I was particularly shocked by the anti-Muslim rant of the 'fake Gandhian' at Navagam village. On the other hand, I was overwhelmed by the people of Napa village, where Gandhian ideals are lived and cherished in practice, and where there is an absence of caste and communal conflict. Encountering this peaceful enclave in Gujarat seemed to make our journey that much more worthwhile. I was amazed by how open people were in terms of interacting with us and sharing their views on camera."

Making this film was an incredible learning experience, says Vachani - a "very, very exciting journey" in which the small crew worked very well together. "It was a tremendous experience to make a road film that is a documentary as well. We were trying to juxtapose a distant past with the immediate present, where we were constantly on the move, and where the interactions with people we met were limited by time and often, necessarily transient." His satisfaction at meeting this challenge is evident from the way he says these words.

The film, surprisingly, has its own connection to Gandhi. The strapping young Mrinal Desai, director of cinematography, is a great grandson of Mahatma Gandhi. Says Lalit, "When I approached Mrinal to be the cameraman and to shoot the film, I had no idea that he was Gandhi's great grandson I found out about this much later from a common friend, and decided that I would bring this up with him on our shoot."

But there is an irony in this too. When the director asks him whether he feels anything special about working for this film, Desai smiles and says, "Nothing. It is like shooting any film." In the land that has forgotten its greatest son, it seems only normal that his own kin should think this.

URL for this article
http://indiatogether.org/saltmarch-reviews