From women's media to rural media
Newsletters in UP that began as a development effort to help women communicate among themselves have evolved into much more, addressing problems that are relevant to whole communities instead. Tarannum Manjul reports on a crop of 'alternate media' that is in fact very much the centre of the communities they serve.
19 June 2005 - 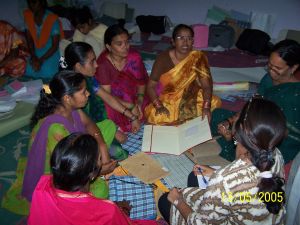 URL for this article
http://indiatogether.org/rurmedia-media