REVERSING THE DAMAGE
Relocation of tigers to Sariska proceeds, amidst caution
Two tigers have been relocated from Ranthambore to Sariska tiger reserve, but wildlife conservationists are not about to rejoice, given the extent of work pending at Sariska to reverse past wrongs. Malini Shankar digs deeper.
06 August 2008 -

Two young tigers have been relocated from the Ranthambore Tiger Reserve to tiger-bare Sariska Tiger Reserve where all 22 tigers were poached in 200405.

But the relocation of tigers has caused concern among wildlife conservationists, who consider that the primary reason for the cruel culling of the tigers in Sariska was human-caused conflict, and this has not been fully redressed as yet. There are still many villages both inside and outside the forest fringe in the once famed tiger reserve. Only one village  Bagani - has been fully relocated with the villagers expressing satisfaction about the relocation. 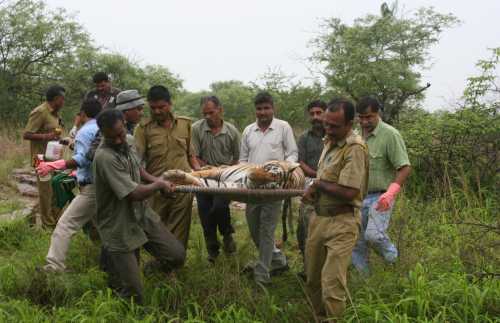 This is not a dead tiger being carried away. It is one of the two tranquilised tigers being taken to Sariska. Qamar Qurreshi, the GIS scientist from the Wildlife Institute of India (far right), oversaw the identification of the tigers for the relocation. Pic : Rajasthan Forest Department.

Another cause for concern is inbreeding. What is not known is if both these relocated tigers are of the same blood line. This is crucial because feline mortality is known to be high because of inbreeding. It is also not known from which range these two tigers were selected for relocation.

However, Dr V B Mathur, Dean of the Wildlife Institute of India in Dehradun, is positive about the relocation. He says, From both the ecological standpoint as well as from the management perspective, it is a sound and pragmatic decision to relocate tigers into Sariska. Genetic studies have not yet been conducted on tiger populations in Ranthambore so it would only be conjecture to say anything on genetic implications of translocation. The managers and scientists are aware of the genetic consequences of an isolated population (isolated population refers to the cautious presumption that these two tigers are indeed from the same blood line).

The road map for tiger conservation in Sariska prepared by the Wildlife Institute of India stipulates more tiger re-introductions in Sariska and this may be done from other source populations to address genetic inbreeding issues. That means if two more adolescent tigers will be relocated from say Dudhwa or Kanha Tiger Reserves in the future, there will be a healthier genetic diversity in Sariska. 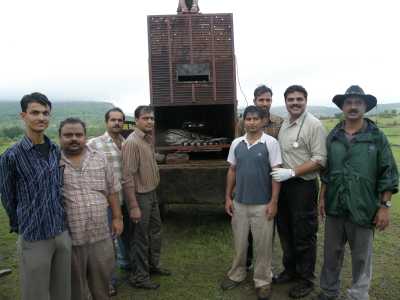 Another note of caution is merited on account of human touch, which invariably causes infection in sensitive wild animals. In May 2007 the forest officials in Ranthambore had successfully rescued a tiger cub that fell into an abandoned well. Two other cubs had died in the accident, and though the rescued cub was accepted back by the mother despite human touch, the cub died eventually of starvation. Autopsy reports revealed a fully empty stomach and dehydration. There is much speculation if it was a case of maternal rejection.

The reasons for the relocation of tigers were indeed many. The entire Sariska tiger reserve comprising 881 square kilometres of forest has been notified as co-critical tiger habitat (CTH). Notification of the Sariska tiger reserve as CTH will render the entire Protected Areas inviolate and will make the space available for tiger sociology, says Dr Rajesh Gopal, Member Secretary of National Tiger Conservation Authority. The notification of CTH mandates relocation of people living inside Protected Areas.

In Ranthambore itself  a park enveloping 394 square kilometres of scrub forest, tiger numbers increased to 40 this year. The territorial creatures that tigers are, they certainly needed more range for their own prey base and terrain. Relocation of tigers will restore the ecological equilibrium which was once prevalent in Sariska. The tiger niche was missing (after the annihilation of tigers), and leopard was occupying tiger niche. Now, it has been restored, says Gopal.

Relocation of tigers will restore the ecological equilibrium which was once prevalent in Sariska. The tiger niche was missing (after the annihilation of tigers), and leopard was occupying tiger niche. Now, it has been restored.  Dr Rajesh Gopal, Member Secretary of National Tiger Conservation Authority.

•  Taking stock of Sariska
•  Resettling people to protect the tiger

The tigers were relocated in the heart of the core area far away from any anthropogenic presence in the Nandeeshwar area in a deep gorge which is neither motorable nor easily accessible. The male tiger was very recently sighted in the Kalighatti water hole right near the main road, meaning he has moved quite a bit from the interior area to which he was relocated, says R N Mehrotra, the chief wildlife warden in Rajasthan. Habitat conditions are very good--the monsoon has rendered the forest a verdant green. The prey base is abundant and there is plenty of water--the primary factors on which we had projected the relocation, and that is why it has been a success, says Mehrotra.

Some officials fear that if there had been any further delay in getting the critical tiger habitat populated with tigers, it would have perhaps invoked denotification of the Protected Areas. This would have had implications on land administration in the state of Rajasthan and funding would have been depleted among other things. All the wildlife that thrives in this pristine habitat where once the tiger ruled would have been left homeless and orphaned. But by declaring the entire reserve as CTH, the entire core area will be sterilised of all conflict, buffer zones will be augmented, pressure from tourism will be eased, and better policing infrastructure has been put in place. For example, beat guards and watchers have been given responsibility to monitor the movement of every single wild animal and the data is being recorded every minute and every hour.

Secondly, better management practices have fallen in place. All people living inside the Protected Area will be entitled to an attractive relocation package of upto Rs. 10,00,000 / adult or land in lieu thereof plus living quarters with all infrastructure like power supply, water and sanitation. What conservationists cannot come to terms with is why did it have to take the killing of 22 tigers and six decades to offer such basic living conditions.

Background of the Sariska Shock

The media termed the killing of Sariskas tigers from June 2004 to February 2005, which rendered the reserve tiger-bare, as the Sariska Shock. Sansar Chand, a poacher, who was let off on bail 40 days after he received an RI sentence for an earlier poaching case, was proved responsible by the official State Empowered Committee for ordering the killing of almost all of Sariskas tigers between June 2004 and February 2005. In the earlier poaching case, Sansar Chands role in inducing the impoverished Bhil tribals in and around Udaipur Hills in south western Rajasthan in poaching leopards was successfully proved by the prosecution  Government Railway Police.

The helicopter carrying the tiger (christened T1) is about to land in Sariska. Pic : Rajasthan Forest Department.

The Sariska Shock galvanised the Indian state to take corrective measures whose pros and cons it ought to have been dissecting after implementing exactly these kind of measures more than two decades ago. If only the people living inside Protected Areas had been given their due by a patriarchal administration just before Project Tiger was initiated or even in the intervening 30 years, perhaps this kind of anthropogenic conflict could well have been avoided. The Sariska Shock it appears in retrospect was a great pointer to almost six decades of lackadaisical governance.

Anti-poaching measures in Sariska are being strengthened, villages are being removed and traffic monitored. There is much focus on the tiger reintroduction programme in Sariska for the government to be lax on security. And anyway, poachers will now be focusing on other places with more tigers! says Belinda Wright of the Wildlife Protection Society of India.

The focus of the media should now shift to the trial of Sansar Chand who was recently acquitted in three cases pending against him  just to keep a watch on the Sariska tigers. This is the only instance perhaps where a disciplined and regulated tourism industry can plausibly watch out for illicit activities.

Malini Shankar is a Bangalore-based environmental journalist and photographer.

URL for this article
http://indiatogether.org/relocn-environment