"Few believe that speech is free"
Does Indian media influence readers' opinion? As 2004 draws to a close, what lessons can be drawn from the NDA's much analysed India Shining campaign and the surprising elections outcome that followed? Arvind Rajagopal, the author of Politics after Television, talks to Chitrangada Choudhury.
01 December 2004 -

2004 saw the BJP led NDA government unseated from power and the Congress led UPA government take it place. It also saw a plethora of media, both English and the language outlets, print and television, all in full swing. One of the major controversies was the NDA government's India Shining media campaign. The media's role in both influencing public opinion as well as measuring it was on scrutiny during the national elections and after. 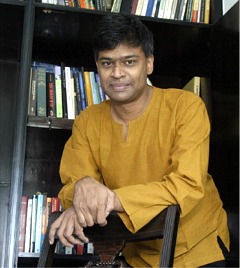 Media and communications scholar Arvind Rajagopal is the author of the award-winning book, Politics After Television. In the book, he explored the intersections between Media, Hindu nationalism and globalization. In this context, he also brought out the cleavages between the English and the language press and their differing perceptions on journalistic practices and on the work of politics.

In this interview Rajagopal suggests that the media has become the chief means of access to the world for a broad section of the urban citizenry, and this had something to do why the India Shining campaign made such an impact on them. Still, many citizens do not rely on the media for their ideas, he says. Rajagopal lives and teaches in New York. Chitrangada Choudhury caught up with him recently.

In 1988, Rajni Kothari wrote a famous essay in the EPW, warning of the exclusivist tendencies liberalization and privatization might set off in India. Of an urban middle class successfully integrating with the global economy, contemptuous of the large majority that struggles to fend for itself. 16 years later, India debates whether such selective emphasis by the BJP-led NDA government -- critics tend to point to its India Shining Campaign -- led to its electoral downfall. Is that how you make sense of the Lok Sabha poll results? How is the media implicated in all this?

Although the NDA did not intend it, the India Shining Campaign made political economy the central campaign issue. It is rare that a ruling party's opponents get such a chance handed to them on a platter. Whoever had been in power would have suffered from such a mistake. What is important however is that the results showed the limits of money clout and media publicity in India. In contrast to the U.S., where cash power and media hype win every election, we can see that elections are more democratic in India, despite irregularities.

But we must remember how successful the NDA campaign was with a broad section of the urban classes. This suggests that for this portion of the population, media have become the grass-roots. That is, the media are their chief access to the world. They are no longer able or willing to make up their own minds, or they are caught within a bubble, within a socially limited segment. It also suggests that the so-called Communication Revolution has mainly created a hall of mirrors, where news media are echoing and reflecting each other's views. If democratic elections are so misleadingly reported, and leave us so unprepared for the outcome despite massive coverage and opinion polling, what other conclusion can we come to?

As a communications scholar, what did you make of the party's India Shining campaign, with its provenance as one targeted at the NRI to culmination in Advani's Bharat Uday Yatra? And the Congress' rejoinder: its 'Aam Aadmi' promise considering that for much of post-independence India, it was the party in-charge of an increasingly inefficient and corrupt welfare state?

'India Shining' was a campaign made for NRIs, and later used for domestic consumption. For NRIs, identity reinforcement is more important than matters of economic rights or political empowerment. At home, such a campaign could only appeal to those who thought the sponsoring party was already doing a good job.

Such persons are either better-off, or already committed to the party for political or ideological reasons. The vote that brought the UPA to power was a reactive vote, to be sure. Sonia Gandhi's campaign, which was largely a solo effort, was however a major achievement, especially given the NDA's vilification. True, it shows dynastic politics at work. But if you and I can recognize that dynastic politics is part of the culture, can poor people not arrive at the same recognition, and figure that voting for her will carry a certain weight? Can we be sure they are simply dupes?

The challenges before the UPA are enormous. But it has been awhile before there was a Prime Minister and a Congress Party President who evoked so much respect. Part of their problem of course is that not only do the poor want more, so do the middle classes and so do the rich. Without an acceptance of economic re-distribution, which entails sacrifice, these class divides will fracture the constituency of support.

Coming back to media talk, your book, Politics After Television explored in some depth the cleavages between the English language and the vernacular press in North India, especially the differing perceptions of what professional journalistic practices constitute. How do you perceive the current newsscape, have those gulfs deepened, or do they tend to come into sharp focus during periods of crisis like the Gujarat riots when many of the English media pointed to the deeply problematic role played by the local language press?

The gulfs between the English language and the Indian language press (I don't want to say 'vernacular' because that word implicitly forbids a superior status to the Indian languages) are well-entrenched and will not go away soon. Newspaper chains like Jagaran and Bhaskar have expanded enormously in recent years, and capitalized on an expanding reading public in the Indian languages. In some places, they have led to increased pay and better working conditions for journalists, and minimal standards such as naming sources, carrying rejoinders, and avoiding owner-inspired vendettas are followed. But they are not inspired by the pro-people ideals that the Indian language press inherits from the freedom struggle. Nor do they look up to the Constitution and the better aspects of the Nehruvian state in the way the English language press has tended to do. They have made huge investments and are paranoid about risk. So they are often more subservient to the regional ruling parties than their competitors.

Where do news television channels fit into this reading, e.g. whose news gathering structures demand reporters straddle both worlds as it were i.e. file simultaneous reports in English as well as Hindi.

We can see the segmentation of the Indian language audience quite clearly in television news. For example, NDTV Hindi is more liberal, as opposed to say channels like Aaj Tak and Zee. News reporters editorialize far more in Hindi television news, because they are usually better-educated recruits from the Hindi press. What is interesting is that they often echo the kathavacak tradition, where a story-teller is also engaged in moral exhortation, not simply reportage. As such their rhetorical range is greater, although when viewed from the perspective of English news it can seem didactic or opinionated.

When TV news reporters have a strong Indian language background, they scan the language press when deciding what to cover, which the English-walas often don't do. This means they can pick up news that is off the radar for others. Don't forget that most stories not coming from official sources are broken in the language press. Only then are they taken up in the English language dailies.

The Indian media is usually seen to have stood up well to the challenges of globalization, that success has necessitated great localisation. Others argue that Doordarshan's inadvertent loss of monopoly may have resulted in a plethora of content, but not necessarily a true diversity. Do you feel optimistic or concerned when you look around?

Globalisation is not only an economic but also an intellectual challenge for the media. Against the pressures to appeal to the lowest common denominator, how do you include critical educational content and also retain audiences? It is far from impossible, but the challenge has to be tackled, not abandoned. In the past, Doordarshan did not have to answer this question since they had a monopoly. The state has to provide some buffers from the basest of market forces, however, or it will reap the consequences. Doordarshan retains the widest reach of all stations, although many affluent viewers have now left it. It still has the potential to present good programming, and should be utilized. At present, we have fragments of good programming, seeds of creative ideas here and there. Given institutional space, they can flower.

In news, we see Bollywood threatening to become the master metaphor for covering all issues. Hindi cinema is more fashionable now partly because NRI audiences are so large and affluent. They have changed the demographics of the media business in some respects. For example, big budget films release simultaneously in Bombay and in New York. But what is screened in Nanded or in Faizabad is often a parallel cinema of a different kind, low budget quickies made for example in Ooty by someone like Mithun Chakraborty, who specializes in this segment. The net result is that the products circulating in India, even when they are Indian, are tilted towards foreign-based audiences. This could have meant more socially enlightened films. But perhaps it is too soon. Right now, NRIs are still revelling in their new-found affluence and are in love with themselves.

People distrust what leaders say. Many still do not rely on the media for their ideas.

Do you think that the worries being voiced for some time now about the state of the American (news) media -- dumbing-down, commodification, oligopolies, cross-sector integration -- are increasingly having a resonance here? If yes, what might be the implications on our complex citizenry?

Fortunately or unfortunately, many people still do not rely on the media for their ideas even if they are exposed to it. This reflects a culture that is a blend of feudalism and state authoritarianism. Politics is an expression of power rather than of opinion in this context, and liberalism is mainly an aspiration. The result is that people distrust what leaders say. In India, few people believe speech is ever free. They also watch what they say. For example, when opinion polls are taken, people don't always tell the truth. This provides protections that should not be underestimated, as the recent elections showed.

It is ironic that the remnants of a feudal culture can serve as people's defenses in the information age, where everything is supposed to be known and regulated.

Minor revisions were made to the published copy of this interview on the recommendations of Arvind Rajagopal.

URL for this article
http://indiatogether.org/rajagopal-media