RAINWATER HARVESTING
Water is no pipe dream here
Konkodi Bhat's simple pipe system at his home in Dakshina Kannada allows the family to use rainwater for half the year and lets the excess recharge the open well for usage in the remaining months. His easily replicable technique can successfully reduce groundwater usage in heavy rainfall areas, reports Shree Padre.
23 July 2008 -

Konkodi Thirumaleshwara Bhat lives with his family in Idkidu village near Puttur in Dakshina Kannada district. They have an open well and a borewell in their house premises. But they dont need to use either of these for almost six months in a yearthanks to a simple pipe system that Bhat has devised. This system directs rainwater to a tank from which they use water for their day-to-day use and also send the overflow to recharge the open well.

Rain is stored in this tank using gravity for daily use. Pic: Shree Padre.

Idkidu receives an average rainfall of 3500 mm. The 1,000-square-feet ground floor roof serves to catch water not only for domestic use of this four-member family, but for the cattleshed and other needs of this farming family too. Since 2003, the family has not had to switch on their open well motor from 15 May to 15 November each year.

Rainwater from the roof goes to an old open tank that was fortunately already placed at a desired height. The bottom of this tank is six feet above the ground. This tank, with a height of seven feet, has a capacity of about 14,000 litres. Water is allowed to fill up to 5.5 feet and then it starts overflowing. The excess water gets filtered in a locally made filter and pours into the open well. In this process, the tank holds upto 11,000 litres of water. As the rainwater is used for non-potable purpose, it is not filtered.

Only if there is no rain for 15 consecutive days do we run the open well pump. But such instances are very few, says Shailaja, Bhats wife. During the monsoon we lift a few pots of filtered water from the well for drinking and cooking. The water is safenobody catches a cold. Previously when we were using borewell water, we used to boil it before drinking.

How it all started

Bhat constructed this house in 1996. The open well was dug only in 2003. Till then, they were using borewell water for drinking and other domestic needs. At that time, they were using the roof water to recharge the borewell. In 1992, a campaign for rain harvesting started in this village, including a house-to-house survey. Amrutha Sinchana Raithara Seva Okkoota (Farmers' Service Federation), a local farmers' organisation had taken the initiative in this movement. Most of the families started harvesting rain in one way or the other. The media named Idkidu as water literate village. It started drawing thousands of visitors from near and far.

Bhat recalls, Our entire village was contributing towards water conservation. I too thought I should join in. How could I conserve rain here? That question generated this idea.

Bhat has devised the pipe system such that once the tank fills up to 5.5 feet, the excess water, on its own, flows down and empties into the open well. For this, a manual act like rotating ball valve is not necessary. How is this done then? Its pretty simple. I have just used common sense, explains Bhat, showing the pipe fitting.

A second pipe is fitted to the pipe that carries roof water to the tank. This has been done vertically, using a T. This pipeline then goes horizontally through a second T and finally vertically down. Height of the first vertical pipe is important. Its the maximum height to which water can be raised on gravity from the ground floor roof. An open elbow with its face upwards is fixed to the upper T. This is to permit the air to leak out lest it block the water flow.

From here, the excess water goes to a circular tank. Centre of the tank has a cement bucket like filter. The filtered water flows down to the open well. The recharge process goes on almost everyday during monsoon. 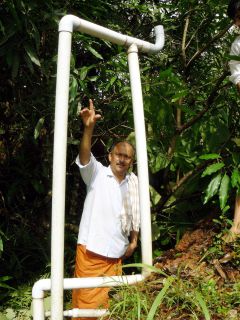 Bhat has this tip for those who want to adopt this system: This system can be done in houses with only ground floor roof. Nowadays everybody keeps the ground floor roof or the terrace at 12 feet above ground level. So, construct your tank so that its lower level is at least six feet above the ground. You can fill this tank upto six feet. Keep the capacity of the tank as per your requirement. Adds Shailaja, The water pressure in the taps will not be high. But then, higher the pressure more the wastage.

Have anybody followed this idea? Thousands of people have come, seen and appreciated, replied Shailaja. A few have shown keenness to implement this. Maybe some might have already done so. But we havent got any information on this so far.

Bhats pioneering success in reducing the groundwater use by half has shown a way for others as to how to make their water management sustainable in heavy rainfall areas. In the Dakshina Kannada district, many industries, institutions and even farmhouses that are unfortunately borewell dependent, can learn a lesson or two from Bhats example.

The options are many. If the roof water can be stored in the tank and brought to the taps on gravity, as Bhats have one, use of energy can be totally saved. Excess water can be used for open well/borewell recharge. If daily water requirement is large, like in institutions and industries, large Ferro cement water tanks  maybe underground - can be built that can be connected with filtered roofwater.

This will completely do away the groundwater requirement for a minimum of five months, that is, 150 days, a neat 41 per cent. This means saving that much of electricity that otherwise is required to pump water from the 300 to 400 feet. More important is that with that considerable rest each year, the life of borewell will improve. More so if all the excess water after use is recharged in a proper way.

It is high time the rain-rich areas look at rainwater as a valuable resource and start utilising it instead of sending it away. This forethought would make most of the water management systems here sustainable and tanker proof.

URL for this article
http://indiatogether.org/rainwater-environment