GOVT SCHOOLS
Unlearning the untruths
The debate over improving government schools in India is eerily similar in tone and content to the failed ideas that were advanced in the US. We need to steer a different path, writes E S Ramamurthy.
07 March 2011 -

Recently I came across an interesting thesis on the impact of big money on education in the USA. I am reproducing below excerpts from it which have a bearing on the emerging scenario in our country.

You might wonder - why am I raising this here, when in our country charitable or private foundations are very few and far between, and certainly not of a scale enough to influence policies and action? It is because big money is influential, irrespective of its sources. And the strategy used to denigrate the Public Education System in our country is no different either.

The 'market' mantra is a failed slogan

Each year, in the budget the Government announces the allotment of huge sums of money for education. Before too long, powerful interests of various hue move in to the center of the stage. And all the arguments highlighted in Joanne Baran's quote above appear in their opinions. Clearly, in India too the debate is coming to the same stage as in the United States, and so are the prescribed solutions. The parallels are too close to be ignored.

Let us take a look at what our own Annual Survey of Education Report (ASER) 2009 had to say on the subject: "When various variables such as family background, income and others are controlled for, the difference in learning levels between government and private schools becomes marginal. 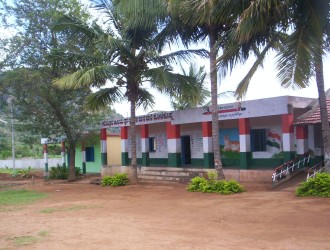 The root cause for most of the ills that plague the system is the enormous distance - both physical and psychological - that separates the power centers within the system and the schools where the actions take place.

Similarly, Education Initiatives, India's largest private sector testing organization, found that any lead that private schools show in their learning outcomes over government schools can be completely explained away by students' socio-economic background, students' initial levels and rote/procedural nature of learning tested. In part of course, the trouble arises on account of the usual assumption in reference to private schools-they are generally seen to be high-end private schools. The reality however, is that a majority of private schools are only marginally different from their counterparts in government".

It appears that the ground realities are the same, whether it is USA or India. Under these circumstances, it is a myth to expect that the much touted PPP model can come to the aid of the PES. It makes even less sense to pump public funds into private schools in the garb of providing access for 'poor students' to quality education - which unfortunately is seen to be a corner stone of the RTE Act.

It is well recognized that private and public schools have their respective roles to play; it is no one's argument that the contributions of the former are to be ignored. They are and will always be the schools of choice for those who afford them and also be the catalysts for excellence in the school system. This sector does not need the munificence of the State to survive; it is best if the government confines its role to regulation here. The thrust and focus of the State - both in physical and financial terms - should be on improving the public education system to an extent that the above gap is substantially bridged.

This will in the long run be the most cost effective approach towards providing this essential service to the common people in the country. Only the 'unbelievably' naive will continue to repose faith in the possibility of private schools coming up in numbers large enough to offer an alternate in the areas where State-run schools are presently functioning. After all, we still have countless small towns and villages with no proper banking services, a decade after this sector was liberalised. Why should education be any different?

At the macro level the first factor that gets our attention is the commercialisation of the entire sector, resulting in powerful lobbies that thrive on weakening the PES. Naturally such lobbies alone will not be able to achieve much if the PES did not have serious inherent weaknesses that lend itself to such exploitation.

The root cause for most of the ills that plague the system is the enormous distance - both physical and psychological - that separates the power centers within the system and the schools where the actions take place. This is apparent at every stage from policy making to implementation. Critical decisions are made without the participation of the stakeholders, an attitude that can only be descrived as either arrogance or indifference. It is often said in defense of such an approach is poor parents are too ignorant to be partners in a meaningful dialogue; ironically the same people are thought to be very enlightened in choosing private schools over state-run ones.

In reality, every parent decides which school is a good one, based on their own set of values, perceptions and aspirations, and these could easily be very different from yours or mine. This is all the more reason why we should include them during the planning and implementation of the system.

At the micro level, no one - least of all the State - can bring about a change in the schools by diktat. The best one can do is to make a school want to upgrade itself. Alternately, the push for this upward movement could come from the community, to whom the school rightfully belongs. Presently the perception of the latter is that a government school is not worth their attention, as it is a place where 'nothing happens'. Once they see a ray of hope, a process of change in this perception will be set in motion. I have seen this transformation in many communities where the schools have started performing well.

That brings us to the core issues - ensuring accountability for the learning outcome and the empowerment of the stakeholders. The kids belong to the communities and no one can claim to represent their interests more than the latter. The RTE Act rightfully places all the responsibilities at the hands of the stakeholders but falls short in providing them with the powers and resources needed to address them.

Here, we should go back to the basics of the Constitution of the country; it was envisaged that the governance - especially with respect to the delivery of social services at the ground level - will be entrusted to the Local Bodies through appropriate legislations for the Panchayathi Raj Institutions. In a pluralist 'multi-everything' society like ours, there is no other option except to decentralise such processes and empower the communities to handle them.

URL for this article
http://indiatogether.org/pubschool-education