FIGHTING POVERTY WITH RTI
Gearing villages up for entitlements
The National Rural Employment Guarantee Scheme (NREGS) is to be implemented in 200 districts around the country in the first phase. One of the main challenges will be to ward off corruption. Surekha Sule was recently involved in conducting a training programme, and notes how some villages in Andhra Pradesh are gearing up.
12 January 2006 -

It is harvest time, and on an early winter morning, some villagers in Andhra Pradesh set out to pluck cotton from the fields. They come back tired in the evening and the women have to cook dinner. Do they know about the right to information? No. Are they aware of a new employment guarantee scheme assuring 100 days work per family? No. Shall we do an exercise together to map your village, list down the issues of your villages, identify facilities that the villagers need? This would help identify work when there is demand from the workers registered under the National Rural Employment Guarantee Scheme (NREGS).

The villagers consult among themselves, and then they agree. The exercise is called participatory rural appraisal, or PRA. Early next morning, a group of trainees (social workers) are to meet these busy villagers for the PRA exercise in three villages -- Budaram, Kanchanpally and Gundalapally. The meeting is set at 7 o' clock. The trainees are coming in a total of six groups, with two groups conducting the appraisals in each village. One group would conduct a village mapping and the other would look at social infrastructure including schools, banks, government offices, etc.

Who are these trainees? During 2-9 December 2005, the Rural Development department of Andhra Pradesh in consultation with National Institute of Rural Development (NIRD) held a training of trainers (ToT) programme in community mobilization and awareness about Right to Information (RTI) and the National Rural Employment Guarantee Scheme (NREGS). An NIRD team conducted the training at Nalgonda for 54 rural community workers.

These trainees, mostly young men and women, were from eight districts of Andhra Pradesh including 5 from Adilabad, 6 from Ananthpur, 7 from Kadapa, 6 from Khamma and 7 from Warangal. A majority among these participants -- 37 -- were community resource persons (CRPs). CRPs are village level social workers identified by the state's Commissioner of Rural Development. 5 others were community coordinators (CCs), 6 district resource persons (DRPs), 3 mandal training coordinators (MTCs), 2 watershed development team members (WDTs), and 1 district social mobiliser (DSM). Interestingly, women (40) outnumbered men (14) participants. Most of the trainees were graduates and some post graduates and undergraduates too. They are Telugu-educated and hence Telugu speaking, mostly. Very few speak Hindi and a couple of them speak English. They get selected at the district/taluka level project office.

After the PRA exercise, Goondpally villagers together felt that they wanted a connecting tar road very urgently; at Kanchanpally, the villagers thought the water supply issue should be taken up first.

The training methods are very different from the standard classroom training methods. The participants were to decide how they should learn. First, the standard sitting arrangement of a lecture hall with table-chairs on the dais and audience facing the dais was dismantled. Everyone sat on the floor in a circle including resource persons. After the initial introduction giving name, place, work, experience etc., the programme was chalked out in consultation with participants. "We are like carpenters, you tell us what kind of chair you want and we make it," said Pradip Prabhu, Senior Fellow at NIRD and a programme team member.

The trainees were asked to select together a name, symbol, slogan and prepare posters writing down the excerpts from their group discussions. They also gave vent to their creativity through writing scripts for a drama on a social theme and enacting it during post-dinner night sessions. Over the next two days, a sense of camaraderie developed through various activities and games conducted by Bernord J P  an NIRD Fellow. One of Bernord's games was to raise level of attentiveness and concentration. Each one in the circle speaks aloud number but at 5,15,25you clap and at 10,20you throw hands up. This is done in quick succession, and when one misses out the right number, s/he is out of the game. From the second round onwards, participants were more successful in sustaining the game longer, implying improved attentiveness.

Pradip Prabhu conducted a "Chana" game  giving 50 chana (chickpea) to all participants. Each one takes them in closed fists to the other who is supposed to recognize the full fist. If right, s/he gets all chana, if wrong has to give his/her own stock of chana. This continued and the result was that either one had no chana, few, many or much more. This outcome was used to explain the theory of poverty drawing a triangle with only one at the vertex with more than 175 chana (rich), below that 3 with 150-175 chana (upper middle class), below that 5 with 100-150 chana (middle class), below that 11 with 50-100 chana (poor), below that 11 with 25-50 chana (BPL) and below that 12 with no or less than 25 chana (poorest among poor  PoP). In this exercise, 34 out of 42 i.e., 78 per cent were poor, BPL and PoP. This led to lively discussion among participants on causes of deprivation and the need for struggles. The group itself came up with the thinking that it is through exploitation and cornering resources and wealth that the very few rise up to the upper and rich class. This was not conveyed through standard sermons but through a facilitation that enabled them to think for themselves.

Another game Prabhu conducted was a survival game in which the trainees walk in a circle. There is a threat of nuclear attack and bunkers (newspapers spread randomly within the circle) have limited capacity. The question is how to save as many as can be. When the alarm rings, participants scramble on the spread sheets of newspapers  pushing each other, falling over each other, hurting each other to save "oneself" not others. In the process, the papers tear into small bits, meaning bunker remains exposed to the nuclear emission and everything gets destroyed. This is the message. The community, which is not together in crisis loses everything as each one is self-centred. Instead can community come together and discuss methods of survivals? The participants slowly came around with innovative methods of survival.

Roopa B, a visiting Fellow at NIRD steered a gender sensitisation session giving them some statements to endorse and exercises on role models and decision-making. The outcome was used to demystify concept of gender, gender division of labour and role of women.

That was about the training for the people who were to conduct the PRA exercise for villagers, centred around the transparency law (RTI) and the NREGS programme. Fast forward now to the PRA itself.

For the early morning PRA exercise, the trainees gathered the villagers together singing songs, going door to door, and talking to onlookers. Together they drew boundaries of the village with a stick on the ground. Then the village roads were drawn. Using various symbols, houses, temples or places of worship, schools, handpumps, etc., were drawn. Each household had a paper with a number and villagers were given various symbols, e.g., corn meant adult men, peas - adult female, gram boys, soyabean - girls, small twig  woman headed family, straw  disabled, red colour  SHG member, etc. The villagers and participants together placed these symbols in each house as per the information given by the householder. Finally each house number was written on the paper. Similarly, other details on status of education, employment, health, etc., can be mapped. 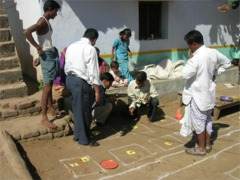 In the last phase, everyone sat down together and based on the information, identified various issues and problems and prioritised them using a graded piece of paper. Thus, at Goondpally villagers together felt that they wanted a connecting tar road very urgently, at Kanchanpally, the villagers thought the water supply issue should be taken up first.

Back to base camp

By about 10-11 am, the just-trained trainers came back to their own training camp at Nalgonda with data on various parameters.

After presentations on the outcome of the PRA, the trainees were given manuals on RTI and the NREGS. Reading together, they came to know the basics of RTI and NREGS provisions. They were given school book-like questions and scored more than 11 out of 12 on a test. This again explodes the myth of the standard practice of a classroom lecture on the issues, which are not so readily absorbed. Instead give them enough time to learn themselves is the message.

After this, a situational analysis of the villages was taken up. I conducted this session, in which three models of realistic situations were simulated making use of data about the three villages visited by the six groups. The trainees acted out various roles.

In the first case, gram sabhas identify works of water tank and road construction at a cost of Rs 5 lakh. Some participants acted as labourers registering for the NREGS programme, getting job cards and demanding work during summer. In one village, the sarpanch and contractor connive and shoddy work is done for Rs 3.5 lakh while showing expenditure of Rs 5 lakh on paper. A vigilant villager files a case under RTI with the NREGS office at the district level, to take measurements and sample of materials. The truth comes out and the contractor is booked for fraud while sarpanch has to resign.

In the second case, an MLA comes on the election tour, makes a loud speech and promises a road and water tank. He wins the election and to recover the cost of elections, he is after the sarpanch to cook up employment guarantee work. The sarpanch also needs money to cover the cost of his own election. Besides, the sarpanch needs to undertake many trips to the taluka level office for village works. He has to bear the cost of transport, and the whole of a working day goes in this visit, thus losing his day's work. The sarpanch gets some job card holders to apply for work. The Rs 5 lakh worth work starts, but without village labourers. The politician gets a contractor to do this job within Rs 2.5 lakh with machines and outside workers. During the next monsoon the road is washed away and in the second year the water tank collapses. The villagers make a RTI application and get to the truth. But the politician has connections right to the top and goes scot-free. The sarpanch, however, is made to step down.

In third case, president of a self help group (SHG) federation convinces the gram sabha that they themselves should undertake village works. The work is done as per the norms and specification and all are happy that it is their own work. Enters an NGO on the scene and facilitates to get the sarpanch to take villagers in confidence about the expenses incurred in travel to the mandal office and the loss of his/her day's work. The villagers decide to raise a fund to support the sarpanch's expenses and resolve that the sarpanch will not spend more than Rs 1000 on elections so that there is no temptation to make money out of public money.

All the trainees as well as resource persons enacted roles of villagers seeking work, sarpanch, contractor, politician, SHG federation president, NGO volunteer, etc. The impact of this training and capacity building was seen in the level of enthusiasm and action on the part of participants. On the last day, some of them gave "training" on several modules and conducted those sessions almost like the resource persons. Compare this with conventional classroom sessions of computer presentations, sleepy monologues, and bored faces of participants.

Post this camp, the trainees are expected to go back to their regions and organise similar workshops for other grassroots social workers. The NREGS itself has been announced in 200 districts across the country including 12 districts in Andhra Pradesh. This is a prelude to NREGS coming to all over the country.

URL for this article
http://indiatogether.org/prartiega-poverty