POKKALI FARMING
Farmers take the long-term view, with long stalk rice
A group of committed individuals in Alappuzha, Kerala are battling odds to revive cultivation of the unique Pokkali variety of paddy that had given way to the more lucrative business of shrimp farming. P N Venugopal reports.
03 November 2013 -

Ward No 15 of Ezhupunna panchayat in Alappuzha district is like any other place in coastal Kerala - surrounded by backwaters and lined with paddy fields. However, the Puthankary paddy field here had not seen any paddy for the last 25 years. It is not as if the land was left fallow for the last quarter of a century; on the contrary, the fields were water-logged and there was plenty of fish, mostly prawns. This year, though, it is a different story: lush green stretches of paddy stalks, swaying in the light breeze greet you, soothing your eyes.

The paddy fields of coastal Ernakulam, Alappuzha and Thrissur districts are different from other paddy growing areas. These paddy fields were home to a unique variety of rice, the Pokkali, or long-stalk paddy. It grows in saline water and has high nutritive value and is unique in the salinity tolerance it possesses. Paddy was traditionally cultivated in these fields from June to October and then the field would be inundated by letting in water from the backwaters and prawns would be grown till April the following year. Prawn/shrimp cultivation is done by the farmer or by the contractor to whom the field is leased.

This rice-fish alternation makes for a mutually supportive ecosystem. The droppings of shrimps work as natural manure for the paddy and the tall paddy grass after the corns are cut off become highly congenial habitat for the prawns. Recycling of nutrients happen and the productivity of both paddy and prawns remain high.

Various factors such as financial viability, shortage of labour, demand for land for other purposes, and general apathy towards agriculture have been responsible for this general decline in paddy cultivation. But in the case of Pokkali, there was another special factor over and above all these - the lure of money. If Pokkali farming is given up, three crops of prawns can be had from the same land over a year, bringing in foreign exchange by way of export earnings. The government policy of providing subsidies and incentives for prawn farming also contributed to the shift.

This predictable decline happened in Ezhupunna, just as in various other parts of coastal Kerala. The Puthankary paddy field was once owned by one family, but was distributed among more than a hundred families under the land reforms of the 1970s. However the original owners recouped the entire farm land by buying off the small holders at fancy prices in the late 1980s. Their idea, it is reported, was to fill the fields and utilize it for industrial purposes. However, by that time land conservancy laws were being implemented more vigorously than before, and so it was given on lease to another individual for round-the-year prawn farming. Pokkali farming was totally given up, resulting in an ecological imbalance.

If Pokkali farming is given up, three crops of prawns can be had from the same land over a year, bringing in foreign exchange by way of export earnings - and the government has been subsidising this as well.

"Year round shrimp farming also resulted in the loss of biodiversity of local flora and fauna due to their exposure to a highly saline environment," says a report submitted by an expert committee constituted by the government of Kerala for studying .sustainable aqua culture policies in Pokkali lands.. The committee was headed by Dr B Madhusoodana Kurup, Vice Chancellor, Kerala University of Fisheries and Ocean Studies.

The saline environment not only affected the flourishing organic vegetable cultivation in the neighbouring households, it also affected the houses where the bricks of the walls became brittle and crumbled due to the saline wind. "It was not love for Pokkali that brought us together," says Benny Kalathil, one of the leading lights of the Pokkali Samrakshana Samarasamithy (Pokkali Conservation Committee). "Our houses were crumbling and repairs and rebuilding had become the order of the day."

Kalathil and his neighbours formed a residents' association and started an agitation against round-the-year prawn farming. Meanwhile, the government had also come out with the policy of 'one paddy-one fish,' i.e. alternation between the two in a calendar year. It was an opportune moment for Francis Kalathunkal, social worker, engineering college professor and convener of the Pokkali Protection Forum in the adjacent Pokkali fields of Ernakulam district to step in. He added a new and logical dimension to the agitation of the residents' association by raising the demand for restoration of Pokkali farming.

The struggle for revival

After a protracted struggle of nearly four years, 56 hectares of the Puthankary paddy field were given on lease to the PSS in May this year, for one season. According to Kalathil, it was granted more as a challenge, with the agriculture department initially promising them all assistance as may be needed. However, the promises were not kept, and the mission became a real challenge for the 28 individuals who comprised the PSS.

The outer bunds of the vast field were not fortified, the 50 HP motor required for pumping out the water was unavailable, as was the high power connection required for running the motor. Time was running out as the preparatory work had to be finished before the onset of monsoon. The PSS had been assured seeds by the Agriculture department, but that too turned out to be a false promise. Finally, the committee managed to get seeds from a women's cooperative.

There was severe shortage of funds too, as almost every one in the committee was engaged in some occupation or the other in the nearby city of Kochi, with little money to spare. However they scraped through by collecting money from the members and even pledging their gold.

Finally the sowing was done, and for replanting, the students of two nearby colleges volunteered. By this time, the initiative had generated interest among the public and there was a steady stream of visitors, including experts from the rice research stations.

At this point, the committee came out with a novel idea of issuing bonds for collecting funds for the venture. PSS issued bonds with face value of Rs 1000. The understanding was that the money would be returned without interest after six months, or in the form of paddy of equivalent value, according to the preference of the bond holder. They were able to collect more than three lakh rupees in this manner. "It is more out of goodwill than as a profit-making investment that this money has poured in," says Kalathunkal.

Since Pokkali fields are not infested by weeds (because of the salinity), pesticides are not required and since nutrients are already present in the soil because of the prawn cultivation, no fertilizers are required, which saves a lot of expenditure when compared to general paddy cultivation. Even then, the total investment has exceeded Rs 5.5 lakh, which the committee hopes to recoup if there is a reasonable crop with at least two tonnes yield per hectare. Harvesting is scheduled for early November. 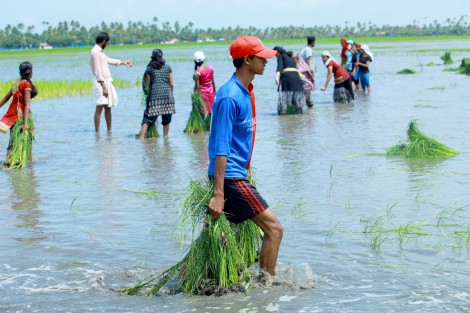 With the community struggling for resources, students from nearby colleges
volunteered to help replant the crops.

Harvesting the Pokkali fields has always been a problem for farmers, because of shortage of hands. It is somewhat more hazardous than reaping the usual paddy crop because one has to tread through water and also because the paddy stalk is long. Based on the recommendation of the Expert Committee, the government had commissioned a private party for developing an amphibian harvesting machine. It is reported that the machine is ready, and will be made available at Ezhupunna for harvesting Puthankary, which will also be a first in Kerala.

The PSS is now looking forward to the government implementing the recommendations of the Expert committee headed by Dr Madhusoodana Kurup. Pokkali had already received a Geographical Indication (GI) Certificate in 2009 and the Plant Genome community award 2010-11. Now the committee has recommended that the government declare Pokkali/prawn farming as a "Heritage farming system of the state."

The committee further suggests that the Government of Kerala should enact a policy that makes rice integration in the Pokkali fields of Kerala mandatory; it recommends that license for shrimp farming in these fields be issued only to those fields which are raising one crop of paddy. According to them, "Rotating one crop of paddy with one crop of shrimp annually will be the most ideal farming system suitable for the fields of Kerala. Multiple cropping system of shrimp is not recommended in these fields, as it will adversely affect ecological sustainability." PSS is also more immediately concerned with getting the procurement price for Pokkali raised to Rs. 50 per kilogram.

The members of the initiative are not sure whether they will get another chance next year. But they don't seem to be unduly perturbed by it. "There are many positives in our venture," says Kalathumkal. "We have generated 1400 days (of) labour so far, which itself is an achievement," says Kalathil. Inland fishermen were allowed to fish from the farm, which otherwise remains out of bounds for them when the prawns cultivation is on, he points out. The initiative, whether repeated in the coming years or not, is bound to inspire other groups in various parts of Kerala.

URL for this article
http://indiatogether.org/pokkali-agriculture