PRE-EMPTING WAR
Wanted: A peace movement
Arguing against the nuclear enclave and its retainers is a kind of national service, and we must press on, no matter how futile it may appear at times, writes Firdaus Ahmed.
16 August 2009 -

With the recent launch of the nuclear submarine, INS Arihant, one item has been struck off the laundry list of military hardware that has been lined up for procurement. But many others remain, including at least two more nuclear submarines - the eventual figure is ten. Three aircraft carriers, including the Gorshkov yet to fetch up from its Black Sea port, are also on the cards. The shopping list includes a heap of nuclear-tipped submarine lauched missiles of a greater range than the present 700 km of the K15 experimental missile. Missiles of the IRBM class, Agni III and Agni V and ICBM Surya, to target the eastern seaboard of China and beyond are in the pipeline. The missiles are to be MIRV'd, i.e. fitted with multiple independently targeted warheads.

The whole gamut is likely to be in place in a decade, though each of these pieces is already in place to a limited degree now. Why is all this needed? Presumably, the answer is that we must take a pessimistic view of the future - namely, that confrontation with China is inevitable, and that some kind of military engagement to contain Pakistan's shaky nuclear warheads will also be needed. While an Indian hyper-realist recently predicted a Chinese attack in 2012, a Chinese web site countered with its take on a Chinese-assisted disintegration of India.

Advances in the missile and nuclear fields are played up in the media, and have votaries in the strategic defence establishment. The argument put forward for continuous advances in militarisation is that this helps deter the mischief of adversaries, and also reassures Indians themselves that the country's defences are on course. This calculation also pays a political dividend, which in turn keeps the technological momentum going, and builds a constituency behind the developments, enabling their continued funding and legitimacy over time. The militarisation would then become nearly irreversible, since it would take a lot of explaining and political capital to slow or turn this ship around, even if it's iceberg-bound now. 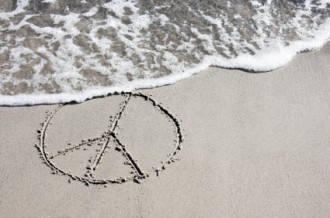 And finally, one should not forget the 'big league' aspirations. India could then stand up to China, participating in border negotiations from a position of equality. This would help resolve the border disputes. India's reach would extend from Aden to the Malaccas, and the Alexander-like narrative of our own times can then be complete. (Pakistan, sitting squarely within this region, is ignored in this dramatisation, so much so that in a farewell address in Delhi the outgoing Chairman of India's Chief's of Staff Committee failed to mention Pakistan at all in his prepared speech).

Amidst this preening, any talk of disarmament seems tragically futile - a recent Times of India article which lists all of the above war-readiness needs, devoted one and a half lines to the disarmament question, indicating the dominant inclination among talking heads as well as decision-makers. Even more telling is the near-absence of contrary views.

But how? The usual arguments can be ignored, since the ongoing developments are evidence of their failure already. All this harware costs a lot of money? Never mind, since India, growing at nine per cent, can afford it. Deterrence can fail, can't it? Yes, but that is not reason enough not to try. The society itself will become militarised by such dogmatic armament, won't it? Yes, but the passivism of Mother India is what led to her subjugation for the past millennium. Shouldn't India's priorities be internal security and development? Yes, but without defence, there will be nothing left to develop!

Every argument has a ready counter, and the vision of mushroom clouds over the country does not hold the public's attention. Indeed, it is taken as fiction, and something that is meant to happen to the other country!

Still, to give up against this tide of recklessness would be unwise. Let's take a scenario ten years on. Consider the case in which despite equal military capabilities, due to some or other operational level move, one of the two states is losing. In case of India, this would have a direct impact on the North East, as indeed it did in 1962. In case of China, the impact would be on its hold over Tibet, that is already increasingly tenuous. Though both states subscribe to 'No First Use' of their nuclear weapons, it's not impossible that the loser could countenance using nuclear weapons if either China or India felt it was losing strategic advantage to the other.

A study in the context of an India-Pakistan conflict by the National Resources Defence Council in the US predicts that sixty million casualties could result in a nuclear war, assuming that fifteen cities are targeted. Such casualties would be equally true in an India-China context too. And four decades of economic growth would vanish in a puff, with the US looking on as its largest global challengers engaged in a mutual suicide pact.

Good sense dictates that even as the nuclear enclave has acquired a power that is difficult to dislodge, building up a peace movement of equal weight is the only way ahead. Arguing against the nuclear enclave and its retainers is a kind of national service, and we press on, no matter how futile it may appear at times.

URL for this article
http://indiatogether.org/peaceship-op-ed