MH POLITICS
White Paper, or whitewash?
Maharashtra's politics is in uproar, as the dubious record of the irrigation department provides fodder for a proxy NCP-Congress war. The issues, however, demand real attention, writes Shripad Dharmadhikary.
30 December 2012 -

During the last few months Maharashtra's politics has been in a state of turmoil, with dramatic turns of events including the resignation of the Deputy Chief Minister Ajit Pawar and his subsequent rejoining the Government. At the centre of the whole controversy has been a White Paper on Irrigation in the state.

The issue rapidly became a sensational one in the media. But while such slow development is indeed serious, there was a much deeper reason for the uproar that followed. Irrigation - with its huge dams, canals and other massive projects, and large contracts, has always been seen as a milch cow, and the sector is plagued with corruption.

Since early 2012, several movements and social activists had started investigating and highlighting the corruption and malpractices in a series of dams around Mumbai. Some members of the opposition were also raising the issue of corruption, particularly in Vidarbha. Meanwhile, a senior and serving Engineer in the Maharashtra Water Resource Department (WRD), Vijay Pandhare, acting as a whistle blower, had written to the Government highlighting serious corruption and other issues in the department, and this correspondence was on, though it was not in the public domain.

The issue also seemed to have become a means for the NCP and the Congress - the two parties in the ruling coalition in the state - to carry out a proxy war in continuation of their efforts to each become the dominant party in the state. The irrigation portfolio has been held by NCP ministers during the last ten years.

On 4 May, the Chief Minister announced that in view of the figures in the Economic Survey, the Government would bring out a white paper on irrigation within 15 days. That period, however, went by without any White Paper.

In September, Pandhare wrote an open letter to his fellow Water Resource Department engineers, which was a stinging expose of the corruption and malpractises in the system, and of instances in which this had even possibly compromised the safety of dams. This further strengthened the exposure of corruption which had been dominating the discussions in the media and political circles in the state. Within days of this letter, Ajit Pawar, Dy Chief Minister and former irrigation minister of the state resigned from the Government.

On the night of 29 November 2012, the White Paper was finally tabled before the State Cabinet and made public immediately after that. Neither the cabinet, nor the Chief Minister offered any comment on it. However, a few days after the White Paper was presented, Ajit Pawar re-joined the Government, but this time without any portfolios. This immediately led to the suspicion that the main purpose of the White Paper was to give a clean chit to the Department on various charges of corruption and non-performance.

A detailed reading of the White Paper also strengthens this suspicion.

The first thing that is noteworthy is that there is not a word in the White Paper about the main issue that has been dominating the discussions in the last 8-10 months - corruption. The White Paper treats it as if this issue has never been under discussion.

Moreover, it is also completely silent on some of the other serious issues like equity in irrigation and water distribution, the efficacy of large dams projects, the reasons why drought continues to plague the state even after such massive investments in huge irrigation projects and why the State Water Plan and the River Basin Plans - which are legally mandatory under the MWRRA Act 2005 - have not yet been prepared.

Second, the paper is mostly a collection of figures and statistics regarding the development of irrigation in the state. The WRD already brings out three important documents every year, namely the Irrigation Status Report, the Benchmarking Report and the Water Audit report. Between the three, they have almost all the figures that the White Paper has presented. There is little that is new in the White Paper.

Thirdly, the White Paper is not a paper by the Government, but is a paper of the Water Resource Department. It is essentially nothing but a defense sheet that is trying to answer the allegations that have been made in the past few months (except of course, the elephant in the room, corruption.)

In particular, in the White Paper the department has responded to the figures given by the Economic Survey by presenting its own alternate figures. The figures presented in the White Paper show that the ratio of the GIR to GCA has increased in the state in the last ten years by a good 5.17 per cent. The White Paper also states that significant water was diverted for non-irrigation purposes from irrigation in the last ten years (about 1900 million cubic meters per year) otherwise this growth would have been 6.43 per cent. 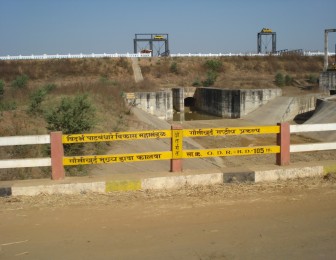 There is not a word in the White Paper about the main issue that has been dominating the discussions in the last 8-10 months - corruption. (Pic: The Left bank canal of Gosikhurd project, Vidarbha, whose 23-km lining was asked to be removed and redone due to shoddy work as a result of corruption.)

•  One state, many demands
•  Accelerated corruption

The main (and only) explanation given by the department as to why its figures are different from those in the Economic Survey is that the latter mentions that its figures for last few years are provisional. This is correct, but that does not automatically make the water resource department figures more authentic. Moreover, provisional figures are also based on some ground data, and hence this argument does not explain the large difference between the two figures.

Nor did the Government make any attempt to reconcile the two different sets of figures and tell the citizens which is correct. Instead, it chose to remain completely silent on this. Indeed, this has defeated the very purpose of the White Paper, which is to provide the citizens with authentic figures and information about the sector. The Agriculture Minister is reported to have stood by the figures provided by his department (the figures used in the Economic Survey) even after the White Paper was published.

In fact, the two departments differ not only in the figures of the increase in irrigated area over ten years, but also in the annual irrigation figures for most of the last ten years. The irony is that the agriculture department figures show the total irrigated area for year 2011 as 4.050 m ha, which is much higher than the figure of the water resource department for the same year, which is only 2.955 m ha. Again, there is no position taken by the Government, there are two (vastly) different figures given by the two departments.

The White Paper has presented several reasons for these cost escalations and delays. Among them are the delays due to land acquisition and relief-and-rehabilitation (R&R), the delays in getting statutory clearances like Environmental and Forest Clearances, delays caused by lack of allotment of adequate funds, mainly due to thin spreading of funds, and repeated changes in the scope of projects after work has commenced due to demands of local communities and affected people.

Except for the thin spreading of the funds, most other arguments are really specious. In many cases, delay and cost escalation are really nothing but the result of bad planning. The more fundamental reasons which manifest themselves in such 'reasons' have been totally ignored.

The delay in land acquisition - attributed to people's opposition - is mainly because the affected people have been treated in a grossly unfair manner and continue to be treated thus. The delay in clearances can often be attributed to shoddy quality of EIAs, lack of preparation, and lack of readiness to acknowledge environmental problems etc. In any case, the Department is well aware of the time that is normally taken for land acquisition, for clearances etc so this can be budgeted into the planning.

Similarly, the demands for changes in the scope of the project after work commences is a clear reflection of the completely non-participatory nature of the project preparation. If the communities are involved right from the conception and design stage of the project, such post-project demands are likely to be much less. Indeed, the white paper should have identified such fundamental steps that need to be taken to avoid delays - like fair deal to the oustees, participatory planning of projects, equitable distribution of benefits etc. But it has avoided exploring the fundamental issues.

These and other suggestions are sensible, but they hardly needed a White Paper to come out. The reasons behind the suggestions are being made by many people for many years - for example, to take up small projects first as they can be completed faster, deliver benefits sooner, have lesser impacts and locations for these are relatively better distributed in the state. Indeed, coming up with such prioritization should have been the basic job of the Water Resource Department in the first place.

These, and many other parts of the White Paper show that it has not served the basic purpose that such an exercise should be doing - namely, bringing out authentic, officially ratified figures and status of the sector, and reasons behind the serious problems plaguing it, including the issue of corruption. Indeed, the way the White Paper reads, it comes out as nothing more than an attempt to white wash the many issues involved.

The Government said (on 17 December) that a Special investigation Team (SIT) would probe the irrigation scam. In a way, this is a clear acknowledgement that the White Paper has not done its job. However, there is little guarantee that the SIT will do it either. With the SIT to be headed by Madhav Chitale, a retired irrigation engineer himself and former Secretary of the Water Resource ministry of Government of India, the question is whether the SIT has the capacity to investigate corruption charges. Also, with Chitale having already headed the Water and Irrigation Commission in the state earlier and having brought out a detailed report, it's a moot question whether he is going to bring out anything new as far as irrigation is concerned.

What is required instead is to form a team of independent persons, who can carry out a free and fair probe, and who have expertise in both the technical matters involved and the wherewithal to investigate scams and corruption. Only that would bring about a fundamental re-look at the issues of irrigation, equity, water distribution, planning, resettlement etc., and provide a roadmap for a different way of doing things in the future.

URL for this article
http://indiatogether.org/pawar-environment