Large numbers of farmers have opted for a way of cultivation that does away with chemical pesticides, and most importantly, uses less water in a water-starved state. The dramatic results are nowhere more visible than in Rajasthan's Shekhawati belt, reports Deepa A.

Shekhawati, Rajasthan - When 55-year-old Banwarilal Jangir decided to turn to organic farming four years ago, he wasn't very sure of its benefits. He hoped it would improve the harvest in his 1.94-hectare farm in Nawalgarh, Rajasthan, where he cultivated wheat, fenugreek, chickpeas and isabgol. The yield wasnt high in the first year, but he wasnt disheartened. He struggled for a while, often selling the produce at market value, without making much profit.

Three years down the line, Jangir's efforts have finally paid off. Two companies have lined up to buy his crop this year and hes hopeful of getting a good deal. I am sure I will earn at least 20 per cent more, says the elated farmer.

His story is echoed across Rajasthan, where thousands of farmers have opted for a way of cultivation that does away with pesticides, and most importantly for a desert region, uses less water. Its dramatic results are nowhere more visible than in the Shekhawati belt, comprising regions such as Nawalgarh, Jhunjhunu, Mandawa, Sikar and Churu. Standing in the middle of a farm, with large red roses blossoming on one side, and green wheat fields stretching on the other, its difficult to imagine that sand dunes can be found just a few miles away.

Much of the transformation has been due to the work of the M R Morarka-GDC Rural Research Foundation, started in Jhunjhunu over a decade ago. The foundation is a non-profit organisation funded by the firm Gannon Dunkerley and Company Ltd (GDC), and its founder-chairperson is industrialist Kamal M Morarka, also the head of GDC and currently the vice-president of the Board of Control for Cricket in India. Apart from promoting organic farming, the foundation works in areas such as micro-credit, primary healthcare and education, biotechnology, waste management and heritage conservation in the fresco-filled havelis of Shekhawati.

The foundation estimates that hundred thousand farmers across the country (with an average landholding of four acres) have switched to organic methods because of its efforts, and claims that farmers in Rajasthan make up half this number. It has helped them find a market for their products, while also facilitating exports. Its main contribution, though, is perhaps something more enduring: organic farming methods reduced the farmers dependency on rainfall.

Even when rainfall is 60% of normal, 50% farm output is possible. Using herbal pesticides instead of chemical, water usage is cut back by at least 40%.

The fact that pesticides are out of bounds in organic farming techniques is another reason the process requires less water. Use of chemical pesticides such as urea means that plants have to be watered more often, but organic farming  which uses only herbal pesticides  cuts back on at least 40 percent of the water usage. As a result, farmers are even able to cultivate crops that are high on water consumption, an avenue that wasnt open to them earlier.

The absence of chemical pesticides also automatically improves the market for the products, as they are thought to be healthier. Gupta says that an apple in Himachal Pradesh reaches the market after at least 40 applications of pesticides. Undoubtedly, munching into a gooseberry that has seen no pesticides is considered a better guarantee to keep the doctor away. Confirming this, the foundation avers that any farmer who has switched to organic farming has seen his exports go up from 30 to 300 percent.

The ratio of exports, however, is still not clear as figures are not available. Usually, the products are sold to traders, who in turn market it abroad or in India. The Morarka Foundation estimates that 60 percent of all the farm products are exported.

New technology is being adopted to further boost exports. For one, farmers get a US certification for their organic products, thanks to the foundations tie-up with a US agency called Winrock International. Secondly, plans are afoot to work out a way in which clients can see the products for themselves without even stepping on Indian soil. Explaining that this is not a fanciful proposition, Gupta outlines the strategy: We are in talks with a US-based company to get electronic tags for fields, which will send out signals. Base stations will transmit these signals to satellites and we are hoping to show clients satellite images of the fields. The cost of such a process has not worried the foundation officials, who insist the wherewithal  such as base stations currently used by cellular operators as well as companies specialising in satellite imagery  is already in place. 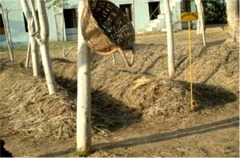 Vermiculture at the Ganga farm at Sikar. Pic: Morarka Foundation.

Harpal Singh, who runs the beautiful Ganga Wadi farm in Sikar with his brother Madan Singh and other family members, is excited by the possibilities. Bel, roses and lime trees grow on the farm, as does wheat and several medicinal plants. His income has gone up tremendously ever since he opted for organic farming eight years ago (the income the farm makes is between Rs 15-20 lakhs annually), and new technology can only send it soaring higher. He is also thrilled that the soil fertility has improved considerably. We have cows and horses at home, so getting manure for vermiculture was never a problem," says Madan, whose farmhands show off the earthworms in compost pits with a measure of pride.

Red roses bloom across a field in the farm, and Ganga Wadi has in fact made a name for itself because of the flowers. The roses, huge and fragrant, are a sell-out at a market nearby. But the rows of compost at one end of the farm, where vermiculture is carried out, get the most attention. The foundation, along with its partners produced 10 lakh tonnes of vermicompost last year. This year, by March-end, they would have produced 35 lakh tonnes.

Though it has taken time for the foundation to mobilise farmers in the area, "it was not difficult", says Gupta. The Shekhawati belt is a politically active region, and awareness levels were high in general among people. And farmers, in fact, were eager for solutions that would boost produce at low costs. The foundation started with 123 villages in Jhunjhunu, addressing sectors such as primary healthcare and education. Realising that the best way to ensure self-sufficiency was to improve the livelihoods of a people whose mainstay was agriculture, a research centre was set up to study organic farming, among other things.

Farmers were called in groups and shown the organic farming techniques, and its benefits were explained to them. The staff at the Foundation -- a spokesperson says it employs as many as 600 people -- fanned out and met people across the state, persuading them that organic farming would work best in semi-arid areas such as Shekhawati. Today, hearing the success stories of many farmers, people come to the Foundation to learn about organic farming.

Buoyed by the success, most farmers in the area are now eager to adopt organic farming. In the initial transition phase, when vermiculture is introduced and chemical pesticide usage stopped, farmers often do face a low output. But as the cost of cultivation in organic farming is less, the income usually evens out. Some like Jangir, who didn't have enough herbal pesticides and manure when he started out, suffer more losses than others. But within three-four years, the farmers usually do well.

The promise of organic farming is that it is considered to be better than Genetically Modified (GM) products. Up to now, GM has mostly been about ensuring that crops are resistant to pests, like Bt Cotton, for instance. But organic farming promises the same benefits without tweaking genes. "This method of farming creates an ecological balance, so that the soil is fertile and the plant is healthy. In such a situation, pests are simply unable to attack a plant," says Gupta. In the years to come, when people look for healthy food, they will automatically think organic, he adds. This is better news than what the farmers of Rajasthan may have hoped for.

Deepa A is a New Delhi based journalist. The Morarka foundation answers questions on organic farming, vermiculture and other related subjects.

URL for this article
http://indiatogether.org/orgswitch-agriculture