SACRED HILLS
Niyamgiri again
Why bother complying with regulations if a committee can decide that it didn't matter much that the law was bypassed? MoEF finds itself on the backfoot, after its experts look away from the law. Kanchi Kohli reports.
18 July 2011 -

The sacred landscape of Niyamgiri Hills in Orissa has in recent years become synonymous with the proposal to mine for bauxite in the region. The area is globally known today surely for two things, that it is the home of the Dongria Kondh tribal community and that Vedanta, the company proposing to mine the region, has not yet received a go-ahead from the government to tap the bauxite deposits on the hill tops. Since 2005 the battle over these hills has been fought on the streets, in the courts, through executive orders and key political decisions.

The Orissa Mining Corporation (OMC) received environment clearance (mandatory under the Environment Impact Assessment (EIA) Notification, 2006) for its Lanjigarh Bauxite Mining Project on 28 April 2009 from the Ministry of Environment and Forests (MoEF). The ore from this project is intended to supply the alumina refinery plant of Vedanta, which is already up and running for the last several years. In fact Niyamgiri's mining saga had first came to light when Sterlite Industries Limited (a subsidiary of Vedanta) constructed the refinery without fully disclosing the mining connect. While the refinery escaped the legal glare as a result, the subsequent focus fell on the mining, and remains so. (see links one, two and three). 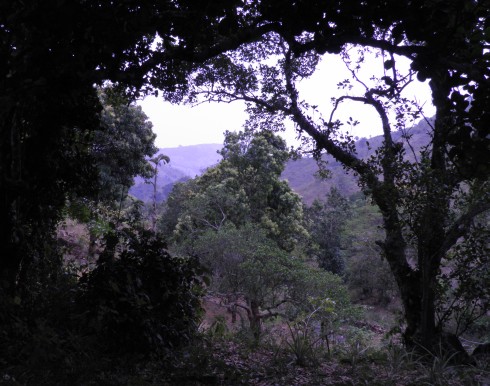 The Niyamgiri Hills are sacred to the Dongria Kondh tribal community.

OMC's Lanjigarh project, in Niyamgiri Reserve Forest in Rayagada and Kalahandi districts is for an annual production capacity of three million tonnes of bauxite by open-cast mechanised method, involving a total mining lease area of 721 hectares. But of this, 672 hectares is forest land, and the conversion of requires separate permission - which was still pending at the time the project began (see this link). The environment clearance letter clearly indicated that no mining shall be undertaken in the forest area without obtaining requisite prior forest clearance, and this pending even today.

On 24 August 2010, Jairam Ramesh, then Minister of Environment and Forests (MoEF), rejected the proposal for Stage II forest clearance for mining in Niyamgiri. He cited various reasons, including the ecological and human costs of mining and also the violations of the Scheduled Tribes and Other Traditional Forest Dwellers (Recognition of Forest Rights) Act, 2006, Environment Protection Act, 1986 as well as the Forest (Conservation) Act, 1980 [the full order is available at http://envfor.nic.in]. This order also clearly stated that since the forest clearance was rejected, the environment clearance (which was conditional on the forest clearance being granted) has become "inoperable".

The challenge to the environment clearance raised some crucial points based on which it was sought that the clearance be revoked. One of the most critical issues that the appeals brought out was that there were two EIA reports that had been prepared for the Lanjigarh bauxite mining project. The first one prepared in 2002 by TATA AIG Group and the next is the EIA Report prepared by VIMTA LABS in 2005. Interestingly, the second EIA report of 2005 does not mention the existence of the earlier one. The case got even intriguing when the MoEF itself, in its affidavit before the NEAA, stated that it is unaware of the 2002 EIA Report prepared by TATA AIG Group and that the environment clearance was granted based on the 2005 report.

That's odd, because the under the EIA notification, impact assessment reports must be placed before the public before it is taken further for appraisal by an Expert Appraisal Committee (EAC) of the MoEF. The public hearing for the Lanjigarh mining project took place in 2003, two years before the EIA report for that hearing was ready prepared. How is that possible? This clear violation of the environment clearance process troubled the NEAA, and it decided on 15 September 2010 to remit the matter back to the MoEF, asking the Ministry to the revisit the environment clearance.

Neither the Minister nor the NEAA cancelled the environment clearance. Instead, despite their negative findings about the project, both of them kept it in abeyance.

•  Orissa's steep mining costs
•  Mine? What mine?
•  Vedanta: The suspense continues
•  Round and round the hills

It is important to note that neither did the Minister's order nor the NEAA's final order quash or reject the environment clearance. One rendered it inoperable and the other sent it back to the table from where it was first approved, despite acknowledging serious lacunae in the way the clearance was issued in the first place.

As if nothing has changed

The in-operability of the environment clearance, however, did not stop the EAC (Mining); that body began its discussions on the project, limiting itself to directives of the NEAA. After deliberations during meetings held in December 2010, a sub-committee was constituted to go into the details of the two EIA reports referred to in the order of the NEAA. The sub-committee examined both these reports in detail and apprised the EAC of its views in March 2011. These observations and recommendations of the sub-committee, whetted by the EAC, were shocking to say the least.

The EAC decided that "the absence of Vimta Lab Report in public domain and the absence of Tata AIG report to the EAC in no way had any tangible effect on the outcome, more so, when additional reports from independent agencies viz, Wildlife Institute of India, CMPDI etc have been prepared to augment the management plan." That is, the experts decided that the non-adherence to law was not important because nothing would have been different if the law had been adhered to! With this, the violation of law was condoned and the comany was gifted a recommendation for environment clearance to be granted.

For the MoEF, such blatant disregard for process was embarassing, and it soon found itself on the defensive. Soon after the news about this position of the EAC was publicised through the media, (see this link), the Ministry issued a clarification. Its note, dated 2 July 2011 stated two significant things, a) that the environment clearance continues to be "inoperable" and b) the EAC has only recommended approval of the clearance and a final decision will be taken by the National Green Tribunal, which is already hearing a review petition of the September 2010 order filed by the project developers (the NEAA was closed in September 2010, but its successor the NGT became active only this month).

Hearings in the NGT began two days later, and the case is likely to be decided on 21 July. It remains to be seen how 'operable' the environment clearance is after this hearing. The future of Niyamgiri is once again back in the court of law.

URL for this article
http://indiatogether.org/niyam-environment