1000 year-old tradition keeps them together
Residents of seven villages in Kolar district depend on water from the Mudiyanur tank which is not in good shape and in need of de-silting. Still, the villagers' worship of goddess Chowdeswari has helped them preserve an age-old tradition of water allocation, finds Surekha Sule.
04 July 2005 -

A few early monsoon showers had not only given respite from the grueling heat of peak summer but afforded a soothing cool breeze in Mudiyanur village, Kolar district, Karnataka. Even at 12 noon, the climate was absolutely salubrious as trees swayed, leaves rustled and bird chirped. No modern day sound! A perfect setting to sit near the 1000-year old Mudiyanur tank.

The Mudiyanur tank itself is in poor shape and needs to be de-silted. Its ability to harness the monsoons is limited; water for the villagers runs out by February. It is the penultimate of a chain of tanks in the Uthanur sub-watershed of the Palar basin. Still, whatever water is allocated to users from seven villages is through an age-old tradition of irrigation management that has surprisingly survived here, even as it has not nearby. But the villagers have not yet been able to completely rehabilitate the tank on their own.

The history is, as narrated by Mudiyanur's ayurvedist Dakshinamurthy, that in 223 AD, 24 brahmins were given this land by the then palegare (king) and Mudiyanur tank was built perhaps in 828 AD. Later, a goddess Chowdeswari temple was built at the foot of the tank. The command area takes up 250 acres and is held by over 900 farmers from seven adjoining villages  Mudiyanur, Bestrapalli, J Vammasandra, Chikkenhalli, Krishnagiri, Hosur and Kenchanaranahalli. It is divided into seven segments  modalagadde (first), eradane gadde (second), vemagunte gadde (land near small tank), aiduberalu gadde (five fingers land), baralu gadde (land at lowest point), venamu gadde (land at elevated point) and oddu gadde (bund at lowest point - this last piece of land gets surplus from all above six). All farmers have a piece of land in each of these seven segments.

A council of elders which looks after general administration as also tank management has two tiers. The first tier constitutes selected representatives of each caste group of every village and second tier constitutes village functionaries called Thoti, Neerganti and Talwara. These three village functionaries from scheduled caste are from Mudiyanur village, by tradition.

"There is so little [water] left that if we break the tradition, we will not get whatever little benefit we derive from our farming", says Ramaiyya about the most important reason behind sustaining water management tradition.  •  Turbulent issues in water
•  Dying tanks, dwindling water

Thoti guards villages, implements orders of the council, makes announcements about the tank water related and other issues, and organizes Chowdeswari puja and festivals amongst other tasks. Neerganti is responsible for allocation and equitable distribution of water from the tank and protects crops in the command area from thieves and cattle. He closes the tank sluice and takes care of leakages in sluice and bund before the monsoon. Neerganti is the information source for all the farmers in the command area. Talwara used to attend on village head Patel or Jodidar, but now accompanies Thoti and Neerganti for collecting dues from farmers for providing these services.

A study commissioned by the Swiss NGO Intercooperation (IC) with support from Swiss Development Council (SDC) has researched the system in detail. On-field interactions with Ashok Alur - the study coordinator, P Narayanappa and others from the local NGO Prakruthi working in Mudiyanur as also Jane Carter of IC confirm that this age old system is very much functional even today.

Even though it has been dead long since in the neighbourhood, how has it survived here for over 1000 years?

"Chowdeswari" say the villagers in chorus. It is this faith followed for over thousand years that has kept the age-old system intact. The seven villages keep coming together to worship goddess Chowdeswari and the communions ensure their togetherness.

Over a thousand years, the landholding has gotten fragmented into smaller and smaller pieces and a majority of the farmers are marginal landholders with about half an acre. The original Brahmin owners moved to cities gradually, leaving land to tenants mostly from scheduled castes. After land reforms, the tenants obtained rights to the lands. Thus the current ownership is mixed but the faith and tradition of water management continues.

Despite the tradition, water needs not fully met

But Mudiyanur tank is now like a vast low level land with some vegetation and weed. Villagers say that the tank used to overflow in Krutika (southwest monsoon) rain by May itself. Now, as late as the end of monsoon in October, it does not even fill up. The tank runs dry by February-March.

Say Somappa and Jayamma from Kenchanhalli: "There is a lack of rain and the tank does not fill. But still we abide by the tradition." Ramashastri says that while rain has been failing, the 140-acre plain land in the catchment has been bunded stopping the water from flowing into the tank. "This 140 acre land has been developed into a horticultural farm by none other than the government itself. Also the forest department has constructed check dams at the ridge within the forest which has reduced the flow into the tank", he adds.

Besides, the Mudiyanur tank is downstream in the sub-watershed and therefore receives only the surplus of all preceding 10 tanks. In the upper catchment areas, the farmers have extensively developed farm ponds to hold up water which has reduced flow in the Mudiyanur tank which is situated at a lower level, says Dakshinamurthy. Then why don't Mudiyanur water users too have farm ponds in their own farms? "Our holdings are so small, less than even half an acre, that we would not want to lose area to the pond", says Ramaiyya.

But, united they stand

"There is so little left that if we break the tradition, we will not get whatever little benefit we derive from our farming", says Ramaiyya about the most important reason behind sustaining the tradition. The farmers from the seven villages have to stand together, as they know perfectly well that divided they will fall. Again, the individual small holdings are spread over the seven segments, so a neighbouring farm may not be one belonging to someone from the same village but from any of the seven villages. This necessitates good relations and cooperation between villagers from all the seven villages. Ramaiyya says that this water management tradition has come down from their forefathers and hence they follow it unquestioningly.

Yes, says Thoti Ramappa, disputes arise over water distribution  mainly how much and when one gets and the other gets. Neerganti Venkatramappa says that these conflicts are resolved internally with his mediation. Venkatramappa sights an example of a burly farmer stealing water at night by breaching a channel. In the morning the neighbouring farmers realised what had happened and called for Venkatramappa. He got together all the farmers and mediated to resolve the issue and to ensure that it is not repeated. Is this enough or is a strict penalty applied? No, people accept the joint verdict. Basically people are god fearing and goddess Chowdeswari's influence gets all to fall in line, says Venkatramappa.

Women and their role

10 to 20 per cent of the land owners are women  mostly widows. Two years ago, 200 villagers, mostly women, donated their labour (shramdaan), de-silted the tank's feeder channel and removed weed from it with assistance from IC-SDC. The de-silting, repair of sluices, and clearing the feeder helped 40-60 acres of command area. Jayamma says that decision making rests with the men and only during conflict or difficulties, women give advice. So when it comes to action, labour and odd situations, women are allowed to take part and sometimes the lead also. 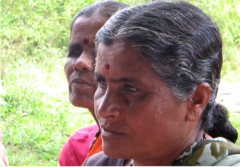 Jayamma is somewhat better off, owning one acre of land. Pic: Intercooperation.

With less rain, less tank water as also marginal holdings, farm income is not enough. Hence the farmers' families have to depend on allied activities (dairy, goat rearing), petty business (shops, repair service, etc.) and working as daily labour at mines, construction (road, buildings). Balamma's three sons make stone and wood statues for sale in different villages and work as artisans for temple and house carvings. But Balamma's half an acre grows food which sustains the family for six months at least.

Jayamma with one acre looks little better off. She has one son and two married daughters. The son tills the land for adequate food for the home. Jayamma bought a cow and 20 sheep through loans from her self help group (SHG). Three tamarind trees and a leaf-plate making business add to her income. Jayamma spent some Rs 1 lakh on her second daughter's wedding. (1 lakh = 100,000)

Venkamma has a different story  she is landless and has four daughters and a son. She is a wage earner and her son works as construction worker. But Venkamma's husband drinks and beats her. She has settled her first three daughters in marriage. She spent Rs 4000 on the first two, but the last girl was married at a cost of Rs 40000. Since there is little scope for saving, all these expenses were out of loans from moneylenders at 5-10 per cent per month. But now at least they have an SHG, she says. The SHG's role is getting increasingly recognized by the community. Says Dakshinamurthy, "Earlier women abstained from decision making but now with SHG, they are getting confident and participate in water related issues."

Mixed expectation of the future

While de-silting of the feeder was undertaken by the women, de-silting the tank upto an area of 96 hectares needs external support, say villagers. Perhaps, in the olden days this task was undertaken regularly by communities or the rulers made provisions.

Whatever the condition of the Mudiyanur tank due to less rain, reduced flow, accumulation of silt, difficulty in raising resources for de-silting and resultant inadequate availability of water, one thing seems certain. Villagers say with firm conviction and confidence that the tank will continue to be managed in the same thousand-year old tradition even by their sons.

URL for this article
http://indiatogether.org/muditank-environment