CAN I HAVE MY LUNCH?
Corruption eats into children's meals in Madhya Pradesh
Despite the tall claims made by the state government and an increase in attendance in the schools, children at many places are simply not getting mid-day meals at all, or are getting it in insufficient quantities. Shuriah Niazi did a reality check.
09 March 2008 -

The Madhya Pradesh government has been claiming from time to time that its mid-day meal scheme has been fully implemented. There are around 80,000 government primary schools in 203 backward blocks of all 45 districts of the state. Additional Chief Secretary Pradeep Bhargava said so at the launch of the scheme for around 200 middle schools (sixth to eighth grade) in October last year. In addition to meals, the state government has also started providing children with books along with the uniform, while girls are getting scholarships.

In Madhya Pradesh the mid-day meal scheme had gotten underway around 1990. But real implementation in the state began in 2001 after the Supreme Courts intervention in a landmark litigation. Like other states of the country, the scheme had two objectives. First, to provide nutritious diet to primary school children and second, to increase attendance in schools. 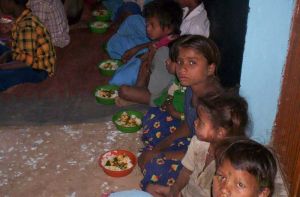 You will get an realistic sense of the situation if you visit the schools in village close to state capital. Mukta, is 8, and studies in the second standard at Achharpura village in Berasia tehsil. She says that she seldom gets meal at her school. Whenever she gets it, it is far from sufficient. A similar complaint is made by her schoolmate Pooja. "I rarely get sufficient food" says Pooja. The girls say that the quality of food is also not good. The situation is more or less the same in other nearby villages.

Elsewhere, even as the state government is making its proclamations, things have gotten worse. The meal scheme has been totally discontinued in a middle school in village panchayat Kharwahi of Rampur block in Satna district from January 2007 till date due to a dispute among senior teachers.

PTA secretary of the school Gaya Prasad Namdev had originally expressed his inability to undertake this work on account of his poor health. After this the principal nominated another teacher as secretary. Later yet another teacher got his name approved as the secretary and sent the information to all the departments. The department sought clarification on account of two secretaries. Later both the appointments were cancelled and Gaya Prasad Namdev was again made the secretary. After this one of the teachers who was removed from the post of secretary challenged this issue in the High Court.

"You can get many such cases where mid-day meal was stopped in schools. Mostly due to differences between the teachers. We get many such complaints from all over the state.

The students of the school are not getting meals due to this controversy. There are about 402 students in this school. Madhya Pradesh Shiksha Abhiyan (Education Campaign) State Coordinator Avinash Jhade says, "You can get many such cases where mid-day meal was stopped in schools. Mostly due to differences between the teachers. We get many such complaints from all over the state.

Vikas Samwad, an NGO based in Madhya Pradesh had undertaken a study on mid-day meal in four districts of the state. According to the study, the meal scheme is shackled because of corruption, absence of teachers, non-availability of food in required among and no arrangement of water in many schools.

Karahal village in Sheopur district is dominated by tribals. The people living here are so poor that they are not able to gather courage to approach the authorities. Besides, at many places, it is school teachers who undertake surveys for the BPL (below-poverty-line) list and select the children for scholarships. The people are afraid that there will be problems if complaints are made against the teachers.

In Kapoora village, the food is distributed only when the teacher visits the village. He comes to the village only three to four times in a month. Besides, the school itself does not get the full allocation of money to buy food items, on account of corruption. A teacher in village Goghri block kurai in Seoni district Manoharlal Vadiya claimed that in his school, mid-day meals were distributed only for 14 days during November-December. He said that this has been going on for the last many years.

Regularity in serving mid-day meals is major issue here. At some places there is shortage of food material, while at others the local PDS shop is not making food supplies available. At many places, suitable cooks are not available due. In Rampur village of Kharwahi block in district Satna, children were not getting mid-day meal from January 2007. Similar is the situation in Kakarwaha, Binagar, and Suklai village of Tikamgarh and in Kot village of Athner block in Bhind district.

It is the general experience of the teachers that the attendance of children falls sharply when mid-day meals are not provided. Equally, teachers are also note that many children do not attend the school after lunch.

Teachers point to another problem. In Madhya Pradesh, teachers have to spend time out of their own schedules on mid-day meals due to which they are not able to teach. For e.g., in the Varla village school, one of the four teachers has to spend precious school-time to bring vegetables for children. This problem is common in many schools at small places.

Bhopal city is a contrast on the other hand. This work is in the hands of Nandi Foundation due to which teachers don't have to face problems. Mukesh Singh, who teaches in a Bhopal school, says, "We face no problem on account of Nandi Foundation. We get cooked food which is easily distributed among children. We don't have to spend (time) separately during teaching hours."

But in rural areas such arrangements do not exist, and teachers have to spend time cooking. Besides, the teachers complain about corruption at the administrative level. On most of the occasions, officials demand commission for releasing money.

One of the teachers posted in a school in remote Jhabua district Sudhir Markam said, "Officials always demand cut from us for the money they give for mid-day meals. How can we pay them from the money meant for mid-day meal? Finally students have to suffer because of these officials."

The officials demanding money are mostly Block Resource Coordinators (BRC) who work for the state governments Panchayat Department. They give the teachers coupons for rations, and release money to the tune of Rs.2 per children per day as overhead costs. The teachers then pick up rations from local ration shop. None of the teachers wanted to disclose their identity.

Theres more. At some places, there are allegations that teachers themselves earn money by selling mid-day meal supplies in the market, alleges Sachin Jain of Vikas Samvad, an NGO that has a substantive record of involvement in the state.

Such is the level of hunger and poverty, that despite this dismal scenario, teachers, guardians, officials and social workers accept that attendance is schools has risen due to mid-day meal scheme. The attendance rises considerably in rural areas due to mid-day meal. However its effect is not so much visible in urban areas, says Jain. On the whole the children are heading towards the schools attracted by mid-day meals which is a good thing, he feels.

In sum, despite the scheme's overall achievement in M.P. in motivating the kids to attend schools, at some places children are not getting mid-day meals at all, while at some other places the quantity is not sufficient to provide meals to all the kids. Corruption and other administrative problems have lessened its otherwise potential impact.

URL for this article
http://indiatogether.org/mmsmp-children