FARMER SUICIDES
1.5 lakh farm suicides in 1997-2005
Close to 150,000 Indian farmers committed suicide in nine years from 1997 to 2005, official data show. While farm suicides have occurred in many States, nearly two thirds of these deaths are concentrated in five States, writes P Sainath.
14 November 2007 -

Close to 150,000 Indian farmers committed suicide in nine years from 1997 to 2005, official data show. While farm suicides have occurred in many States, nearly two thirds of these deaths are concentrated in five States where just a third of the country's population lives. Which means that farmers' suicides occurred in those (mainly cash crop) regions with appalling intensity.

The five worst-hit States are Maharashtra, Andhra Pradesh, Karnataka, Madhya Pradesh (including Chattisgarh) and Kerala. Of these States, only Kerala showed no sustained increase in the number of yearly farm suicides over this period. That's mainly because of a decline after 2003 which was that State's worst year. Maharashtra, for which data exists from 1995, is by far the worst state in the country. Farm suicides there more than trebled from 1083 in 1995 to 3926 in 2005.

The most important problem with estimating suicides is the way a farmer is defined at the ground level: as someone who has a title to land.

•  Suicides worse since 2001
•  Maharashtra: Graveyard of farmers
•  One suicide every 30 minutes

Suicides as a whole rose nationally in the 1997-2005 period. But the rate of increase in farm suicides was far higher than the rate of increase in suicides by non-farmers. In the Big Four States of Maharashtra, AP, Karnataka and MP, the percentage increases in farm suicides were more than double the increase in non-farm suicides in this period. While suicides by non-farmers went up by 23 per cent in the Big Four States, farmers' suicides went up 52 per cent. Indeed, the Big Four States might be termed the Suicide SEZ or 'Special Elimination Zone' for farmers this past decade. In 1997 these States accounted for 53 per cent, or just over half of all farmers' suicides in the country. By 2005, that figure was 64 per cent. That is, in less than a decade, their share of farm suicides, already disproportionately high, leapt to nearly two-thirds.

These and other grim findings emerge from a comprehensive study of official data on farm suicides by Prof. K Nagaraj of the Madras Institute of Development Studies (MIDS). The data analysed by Prof. Nagaraj are drawn from the various issues of Accidental Deaths and Suicides in India. This is a publication of the National Crime Records Bureau (NCRB), Ministry of Home Affairs, Government of India. The period covered by the study is from 1997-2005.

"What's worse," says Prof. Nagaraj, "the trend for this group of States looks quite dismal. All four have, over the nine-year period, shown an ascending trend in farmers' suicides." They began keeping farm data only from 1995, says Professor Nagaraj. "But significant States did not start reporting their data till about two years later. So the study begins with the year 1997. And 2005 is the last year for which such data were available nationally." He has also drawn on the 2001 Census in order to calculate the suicide rate for farmers (FSR). That is, suicides per 100,000 farmers. 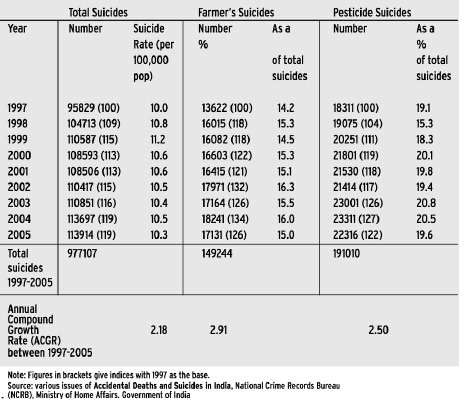 The number of Indians committing suicide each year rose from around 96,000 in 1997 to roughly 1.14 lakh in 2005. In the same period, the number of farmers taking their own lives each year shot up dramatically. From under 14,000 in 1997 to over 17,000 in 2005. While the rise in farm suicides has been on for over a decade, there have been sharp spurts in some years. For instance, 2004 saw well over 18,200 farm suicides across India. Almost two-thirds of these were in the Big Four or "Suicide SEZ" States.

Professor Nagaraj also points to the Annual Compound Growth Rate (ACGR) for suicides nationally, for suicides amongst farmers, and those committed using pesticides.

The ACGR for all suicides in India over a nine-year period is 2.18 per cent. This is not very much higher than the population growth rate. But for farm suicides it is much higher, at nearly 3 (or 2.91) per cent. Powerfully, the ACGR for suicides committed by consuming pesticide was 2.5 per cent. Close to the figure for farmers.

Such suicides are often linked to the farm crisis, with pesticide being the handiest tool available to the farmer. "There are clear, disturbing patterns and trends in both farmers' suicides and pesticide suicides," says Professor Nagaraj.

Not the full picture

Alarming though that is, it still does not capture the full picture. The data on suicides are complex, and sometimes misleading. And not just because of the flawed manner in which they are put together, or because of who puts them together. There are other problems, too. Farmers' suicides as a percentage of total farmers is hard to calculate on a yearly basis. A clear national 'farm suicide rate' can be derived only for 2001. That is because we have the Census to tell us how many farmers there were in the country that year. For other years, that figure would be a conjecture, however plausible.

But even in 2001, when the farm suicides were not yet at their worst, the farm suicide rate (FSR) at 12.9 was much higher than the general suicide rate (GSR) at 10.6 for that year. But the GSR slowed down after that to 10.3 by 2005 even as the total number of suicides went up. It means that the increase in the number of general suicides did not keep pace with the growth in general population. But the FSR seems to have risen more steeply after 2001. By all accounts, while the number of farm suicides kept increasing, the number of farmers has fallen since 2001, with countless thousands abandoning agriculture.

In 2005, the Big Four or 'Suicide SEZ' States accounted for 43.9 per cent of all suicides and 64.0 per cent of all farm suicides in the country. By contrast, a group of States with the highest general suicide rates - including Tamilnadu, Kerala, West Bengal, Tripura, and Puducherry - accounted for 20.5 per cent of farm suicides in India. "Their share of both total suicides and of farmers' suicides declined between 1997 and 2005 even as that of the Big Four steadily rose," points out Professor Nagaraj.

To the extent the media have covered the farm crisis, their focus has been on farm suicides in four States - Maharashtra, Andhra Pradesh, Karnataka and Kerala. Very broadly speaking, that appears to have been right. All have very high rates of farmers' suicides. Madhya Pradesh though, is a major State showing such trends which has received scant attention. (Among smaller regions and States, Goa, and Puducherry show extremely high farm suicide rates but on tiny absolute numbers.)

It is important that the figure of 1.5 lakh farm suicides is a bottom line estimate. It is by no means accurate or exhaustive. There are inherent and serious inaccuracies in the NCRB data as they are based on ground data that exclude large groups of people. As Professor Nagaraj puts it: "There is likely to be a serious underestimation of suicides, particularly of farmers' suicides, in these reports. The most important problem is the way a farmer is defined at the ground level: as someone who has a title to land. This is likely, for instance, to leave out tenant farmers and, particularly, women farmers."

The quality of reporting also varies from State to State. For instance, Haryana shows a very low ratio of farm suicides to general suicides. This conflicts with other assessments of the problem in that State. Data from Punjab have also been highly contested by groups monitoring the farm crisis there.

However, even in this flawed data, the trends are clear and alarming. But what has driven the huge increase in farm suicides, particularly in the Big Four or 'Suicide SEZ' States? "Overall," says Professor Nagaraj, "there exists since the mid-90s, an acute agrarian crisis. That's across the country. In the Big Four and some other States, specific factors compound the problem. These are zones of highly diversified, commercialised agriculture. Cash crops dominate. (And to a lesser extent, coarse cereals.) Water stress has been a common feature - and problems with land and water have worsened as state investment in agriculture disappears. Cultivation costs have shot up in these high input zones, with some inputs seeing cost hikes of several hundred per cent. The lack of regulation of these and other aspects of agriculture have sharpened those problems. Meanwhile, prices have crashed, as in the case of cotton, due to massive U.S.-EU subsidies to their growers. Or due to price rigging with the tightening grip of large corporations over the trade in agricultural commodities."

"From the mid-90s onwards," points out Professor Nagaraj, "prices and farm incomes crashed. As costs rose - even as bank credit dried up - so did indebtedness. Even as subsidies for corporate farmers in the West rose, we cut our few, very minimal life supports and subsidies to our own farmers. The collapse of investment in agriculture also meant it was and is most difficult to get out of this trap."

URL for this article
http://indiatogether.org/mids1-op-ed