Give the environment its due
The Ministry of Environment and Forests is looking away from even the minimal standards of environmental stewardship needed in modern times, asserted citizens and experts in open letter to the government recently. Ashish Kothari and Kanchi Kohli were two of the signatories.
01 September 2004 -

On 3rd September 2004, fifty peoples groups, NGOs and mass movements and citizens came together to express anguish at the abysmal neglect of environmental concerns by the government. It was addressed to an agency they had always considered their strongest ally in government, yet they had been led to criticise it. In an Open Letter to the Ministry of Environment and Forests (MoEF), these groups and individuals highlighted that the role of the MoEF seems increasingly to be that of simply a clearing agency for unsustainable and destructive economic and commercial activities. To make matters worse, the MoEF appears to be systematically undermining the participation of citizens in its decision-making process, and has become more and more closed in its functioning. Lack of transparency not only reduces public participation, it is also a way to avoid serious scientific scrutiny.

Over the last few years there have been clear trends that led to such a joint statement of concern. Avenues of public participation are continuous reducing and where inputs are sought and subsequently provided, they do not seem to be taken on board. Take for instance, the notification of the Biological Diversity Rules 2004. These Rules notified under the Biological Diversity Act 2002, are scientifically unsound, and seriously undermine the role of local communities in safeguarding biodiversity and traditional knowledge. These lacunae had been pointed out by environmental groups when the draft rules were opened up to comments in 2003.

However, to the complete dismay of all those who spent considerable effort in understanding the implications of the draft Rules and giving detailed feedback, the final version was hardly a shade different from its earlier avtaar. The Act was never entirely adequate when it came to conservation, sustainable use and equity aspects, but the Rules made no attempt to supplement it.

Another alarming trend has been the constant dilution of notifications under the Environment Protection Act, 1986. This is especially so with the Environment Impact Assessment Notification (EIA), 1994 and the Coastal Regulation Zone Notification (CRZ), 1991. These amendments have consistently reduced the scope and efficacy of several provisions of these critical legislations. In the case of the EIA notification, public hearings were dropped for projects such as the widening of highways and mining leases for major minerals for land use areas under 25 hectares. This is when Indian Bureau of Mines data shows that almost 50% of the mining leases for major minerals are already users of land below the 25 hectare level. 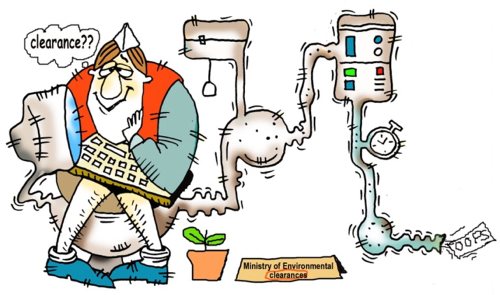 When it comes to the CRZ notification, the amendments have allowed for Special Economic Zones, effluent treatment plants, industrial salt pans, and the mining of atomic minerals even in sensitive coastal areas. Like some environmentalists point out: what is the point of having these notifications when one fine day you realise that almost everything significant no longer comes within its purview?

The EIA notification (the countrys rules and regulations for environmental impact assessments) is in its tenth year, so it is shocking and worrisome that environmental clearances are granted based on shoddy, inadequate and sometimes even incomplete assessment of environment impacts. There is no other Act in India which directly mandates that development projects cannot be undertaken without the understanding environmental impacts. It is then a mockery that projects are under construction when it was never completely understood whether they are environmentally viable or not, leaving alone building safeguards.

NGOs and community groups have frequently pointed out such faulty decision-making, and have provided strong evidence of the dangers posed by such projects. Yet these inputs have been consistently ignored by the MoEF. Unfortunately in such a scenario it is often the intervention of the judiciary that is being sought, which is certainly not an option everyone can exercise due to financial and other considerations. In any case, legal recourse should be needed only in the rarest of circumstances, and this would be the case if the executive was doing its job.

Integrating independent and credible citizens representation in the various expert committees could improve the situation.

The National Environment Policy was uploaded last month on the MoEF website for comments. The text of the policy claims that it has gone through a participatory process! This comes to a complete surprise to those who have been repeatedly asking (with no response from MoEF) for details on how the policy in being drafted and how citizens can make inputs. What guarantee is there that this Policy will not be pushed through like the Biodiversity Rules 2004, completely ignoring public inputs? There does not seem to be any mechanism of reaching out to the citizens for inputs to the Policy, in particular to those who may not access websites.

These trends are not new. The previous government systematically undid many of the gains of growing ecological awareness and standards of the earlier decades. And today, the Common Minimum Programme of the present government has almost nothing on the environment. As the Open Letter highlights, there has been no acknowledgement of the fact that tens of millions of people in India continue to depend directly on natural resources for their survival, livelihood, health, and future development with dignity. Indeed many of the decisions taken by MoEF have further reduced the access and rights of communities to livelihood resources and supported development projects that impinge on community lands and resources.

However, it is never too late to reverse this trend. The Open Letter points out that a legally mandated and significant role can be provided for citizens (especially local communities) in the decision-making process within government. One way is by integrating independent and credible citizens representation in the various expert committees. This would need to be in contrast to the present situation where those who raise difficult questions find themselves reconstituted (i.e., thrown out!).

The public hearing process as part of an EIA notification is an important space for peoples participation, which is often made a mockery of. It is such processes that need to be strengthened in their scope. At another level, the mandate and functioning of the MoEF needs to be revived and one way of doing that is by including increasing the number of technical experts and officials who are known for their commitment to the environment. Equally important, the decision making process has to centrally integrate environmental concerns and that too from the planning stage and in all sectors, which have a bearing on the environment.

Finally, despite the fact that the government's CMP itself is short on environment, a serious consideration of environmental issues in forums such as the National Advisory Council (NAC) is necessary. The NAC has been instituted to monitor the Common Minimum Programme implementation. The NAC has also been made aware of this matter recently, and perhaps the body could review the CMP's worth from the environmental perspective.

The letter has been sent to the MoEF, and the media has been informed.

The authors are members of the Pune and Delhi-based Kalpavriksh Environmental Action Group.

URL for this article
http://indiatogether.org/mefletter-environment