MEDICAL AID
All power is within you
The Hathkhola Medical Bank touches thousands of lives each year, quietly and determinedly led by Ashish Das's self-belief. Ruchi Choudhary reports.
07 June 2011 -

I came to know about Ashish Das from the "Real Hero" campaign of CNN-IBN. A small description followed . he had opened a medical bank where he provided medicine for the poor. I tried reading up about him over the internet and from other sources, but couldn't find much, barring the two lines that were written on the CNN-IBN site. I imagined a small organisation - a handful of people, surviving on meager funds, working enthusiastically and campaigning around.

I called him up a couple of times to fix a time to meet, and one evening went to the Hathkhola Medical Bank. Ashish Das seems an ordinary man, the next-door-uncle type. Clad in an off-white shirt, rolled up sleeves and blue denim, there was an air of the common man about him. He is middle-aged, about fifty, and his hairline has begun receding.

I started out asking him about his work and the medical bank. I've had some experience with interviewing people in social organisations, and I assumed he would begin with how strongly he felt about his work, about campaigns he'd organised, and protests and street-shows to spread awareness. But what I heard from him for the next sixty minutes was a pure and unadulterated narrative of his toil of the last thirty years, and his logical reasoning behind every step.

It was not a story of his hardships, nor a compilation of his achievements, but only a description of his work, and the motive behind it. His tone was not loaded with burning passion, nor dull with years of hard work; it was informative and straightforward.

Immediately after he graduated from college in 1980, Ashish, along with ten of his classmates, started collecting medicines door-to-door (the ones from the pack which we don't use once our illnesses are cured), and distributing these among the poor. It took a lot of time and energy, but this handful of youngsters managed to spread their activities. "We used to be everywhere in Calcutta- metro, tram, bus stands . sticking our posters and talking to people. We used to board the local trains and would be so busy putting out our posters that we reached Midnapore", Ashish recalls.

"But your parents, didn't they ask you to take up a regular job?" I intervened. "Yes, at first they did, then I think they gave up on me. But my mother proudly says now that her son does good work", came the simple reply.

The bank is in the northern part of Kolkata, which was quite prosperous during the Raj, but is relatively poor today. Its inhabitants are workers in the traditionally labour-intensive industries of hosiery, leather, and textiles etc. Many of the women are also employed as domestic help. Most residents live in slum-like conditions, with poor hygiene and little or no facilities. Many suffer from communicable diseases like tuberculosis, and don't know what steps they should take to tackle their condition. The social conditions are also a matter of concern; many young men resort to drug use and crimes.

The Hathkhola Medical Bank today distributes medicines worth 25-30 lakhs every year and organises about 300-400 mobile medical camps annually. Thousands of patients are treated every year for all kinds of diseases. Doctors volunteer to see the patients, and participate in the mobile camps; youngsters come forward to hold educational campaigns for hosiery workers in Kumartula; common people give donations of as small as 20 rupees to contribute to the good work; middle-aged men help with the accounts in the night . it is amazing the way this organization functions. 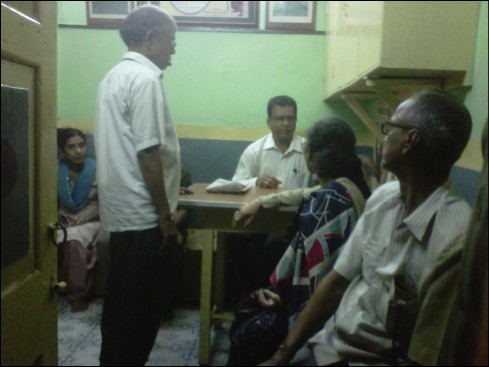 The clock showed 9:45 and there were no signs of the work ending soon, with a whole queue waiting outside the small room, on the narrow road.

Ashish did not stop at the success and expansion of the medical bank. If he had delved into the area of corporate entrepreneurship, he would have turned his organisation into a diverse conglomerate. Starting with the idea of medical bank, he expanded the operations into a number of areas as needed. He identified the extremely downtrodden sections of the society and started street hospitals for them, which he likes to call 'the Footpath Hospitals'.

The Neemtala street hospital was opened because the residents of the traditional Hindu burning ghats are extremely poor, and alcoholism is a common vice. The hospital not only provides basic medical care (giving referrals to critical cases) and medicines, but also makes these people aware of the harms of alcohol addiction and assists them in leaving in habit. The other footpath hospital is set up in the largest prostitute belt of Asia - Sonagachi. Ashish stresses that the whole attention is focused only on the spread of HIV in sex trade. Besides the deadly disease, there are several other aspects of health which are neglected among the sex workers. Basic things like improper hygiene, spread of hepatitis B, malnutrition are common. The footpath hospital works towards solving these simple problems.

The third footpath hospital is located in the Baghbazar area of north Kolkata. The people here mostly work as domestic helps. With them, they carry many communicable diseases to the households they work in. The idea is to arrest the disease at the root cause before letting it spread. These footpath hospitals work in close coordination with non-resident Indian doctors, particularly Bengali medical students.

The Hathkhola organisation has also set up the blood bank, an oxygen bank, pacemaker bank, and what not. They encourage people to donate pacemakers, eyes, and other organs after death and coordinate with doctors to provide them to the needy registered with them. They have also started a Green Card system for senior citizens - where geriatric training is provided to the elderly every Saturday and a praveen nagrik mela is organised once a month.

But why the name Green Card? I was curious. Ashish smiled and said, "because if the minds of our elderly are fresh and green, they will not feel bored and unenthusiastic about life." More than 500 people benefit from the program.

Ashish was quick to identify that most of the diseases of the poor stem from lack of knowledge. He set up schools in different parts to make people aware at an early age and provide education to ensure a good future. Twelve such schools are running today in various parts of Kolkata and outside, purely on a voluntary basis.

While I was talking to Ashish, I realised there were about 8-10 people waiting outside for him. I stepped aside to the corner of the small room. The room had a table where the accountant was consolidating the accounts (at nine in the night) and there were several files for various banks. There was an emergency oxygen requirement and one volunteer rushed to deliver it. An ambulance was parked in the dalaan. The visitors came with various issues. Meanwhile, Ashish's phone never stopped ringing. I noticed the host of trophies tucked in the two shelves in the side - they were not neatly decorated, nor were there pictures of Ashish accepting awards or campaigning.

When the visitors left, I asked Ashish about his motivation to start the work. I came to know that he did not marry, and lived in the second storey of the same building. "Swami Vivekananda is my ideal. He taught us to follow our rational mind. I am only trying to put his words to practice."

"But don't you face problems?" He was quick to reply, "I have studied psychology in my BA degree at college. Problems are problems only if you see them as such. Everything is in the mind. I was once going to a doctor to ask for his spare sample medicines. People advised me to shun the plan saying that I would not get a penny from him. Nevertheless, I went and told the doctor that we are a medical bank for the poor, and in case you don't find medicine for poor people in your samples, please send them to us. I returned and in the coming days, saw a couple of patients with that doctor's prescription. The tenth day, the doctor arrived at our premises with cartons full of sample medicines. So, you see, there was actually no problem at all".

It was getting late, and I thought I'd take leave. Ashish left with me and I was curious where he was going at that hour. The accountant told me that he is going to another office to counsel people. I asked to accompany him and he heartily entertained me. The office was a small room, probably 20-25 square feet in area; there were people of all ages and backgrounds waiting there.

He took his seat in a corner and started scribbling on his notepad, while talking to a middle aged guy. An elderly woman, probably in mid sixties, with salt and pepper hair, was noting down the names of the visitors in a long green register. The elderly man had come to get a referral to a doctor for an MRI, because he could not afford the expensive fee. Next came a dull looking woman, seeming much elder than her real age, whose son had taken to drugs at the age of twelve. With the help of the medical bank, he was in a rehabilitation home, and now she had come to get him moved to another institution where he could study.

There was a sophisticated lady sitting in the far corner, patiently waiting for her turn. Her golden necklace shimmered in the green sari with yellow border. She told me she was an English teacher, and was there to get assistance to get claims settled on her deceased husband's property, which her in-laws had forcefully taken. Meanwhile, Ashish's pen was diligently working, while he listened to the grievances of the people.

The clock showed 9:45 and I could see no signs of the work ending soon, with a whole queue waiting outside the small room, on the narrow road. I took leave and Ashish sent a person standing nearby to accompany me to the main road. My escort had come from a nearby village. As we walked along, he said quite candidly, "He will work till two in the night here. I don't know how he thinks of himself, but I am sure he is God for us."

In the main office of the Hathkhola Medical Bank, there was a small poster on the wall, with its corners weathered from time, which said, All power is within you; you can do anything and everything. . Swami Vivekananda. As I made my way home, I could not help smiling at the thought - in Ashish's life, the Swami's words are manifestly real.

Ruchi Choudhary is a freelancer based in Kolkata.

URL for this article
http://indiatogether.org/medbank-health