..Continued from Part I

Where the juggernaut of the government faltered, voluntary organisations have prevailed. The few of them that have focussed on public health communication campaigns have had better success in reducing iron deficiency anaemia. Nalamdana Trust's five year project in the fishing hamlet of Urur-Olcott Kuppam, in south Chennai has shown that with mere information and without the free supplements it is possible to improve nutritional status.

Nithya Balaji, Executive Trustee of Nalamdana, says her project used the popular medium of theatre to introduce behavioural changes and ownership for health and nutrition projects. At Urur kuppam, initially we got a private donors to add an additional Rupee per child per day to the ICDS expenditure to add a few locally available vegetables, dhal and oil. The children's growth charts showed an impressive increase in the first two months of nearly 1.5 kg. This scheme is currently being supported by local sponsorship, but can easily be transferred to the parents if the state permits it," she says.

Students walk barefoot, despite government schemes to give them footwear. The most common excuse: it is of poor quality and does not last the year. But many students say they've left it back home because they are not used to it. Students in this photo are passing through a garbage collection point on the side of the Adi Dravida School in Palavakkam, which often turns into a den in the night time. Broken glass pieces and animal and human excrement are often seen near the garbage bin, say residents. Pic: Krithika Ramalingam.

The other target group of the project was adolescent girls. As a pre intervention indicator, we measured the anemia levels of 95 girls and held regular meetings for 8 months. The sessions covered issues of understanding one's body, pre-puberty issues, reproductive health and importance of nutrition. Only accurate information had been given- no doles, no tablets. Their Hb levels had increased from 8 and 9 to 11 and 12, respectively. They had adopted better hygienic practices, started eating breakfast and also included greens, vegetables and one affordable fruit in their daily diet," says Nithya.

When the project was evaluated in 2004, after a year of information and education campaigns, Nalamdana found that haemoglobin count increased by an average of 1.5 and in girls with severe anaemia up to 5.6 counts. In a second project area in Subbu Pillai Thottam (in Central Chennai), both adolescent boys and girls were targeted with information and education campaigns done mainly through one on one interaction and street theatre. There again, the Hb levels increased by an avearage of around 2 counts. The scheme implemented in partnership with other NGOs is being continued despite the original donor agency withdrawing from the project.

Nalamdana's findings are anecdotally affirmed by the Anganwadi staff. Tamizhagi says mere supplementation showed only marginal improvement in the moderately anaemic adolescent girls. The eating habits have changed drastically in the last two decades, moving towards a rice-based diet. Traditional iron-rich food like drumstick greens thovaiyal or curry leaf thovaiyal have become devalued and pushing those through the nutrition eduation programme often backfires with adolescents," she adds.

Nalamdana circumvented this issues by involving the community in their own nutritional improvement. Recipe clubs were formed in the study area with the women being given basic information about nutrition dense food. With help from nutritionists and students, the women innovated their own healthy recipes, thus making their integration into daily diets an easy affair, says Nithya.

Juxtapose this with a study by the National Nutrition Monitoring Board that came to the conclusion that national nutrition programmes have failed in achieving their goals largely due to lack of nutrition education with poor outreach. A study of Vitamin A deficiency among rural preschoolers done in 2007, established high prevalence of subclinical deficiency largely due to poor nutrition and that nutrition education component covered a mere 14 per cent of the target population.

No night-blindness, but Vitamin A deficiency still high

In the rural survey, NNMB, an arm of the Indian Council of Medical Research, found that nearly half the children in the under-five age group were found to have sub-clinical VAD or vitamin A level of less than 17 micrograms per decilitre. This is despite that clinical Vitamin A deficiency (night blindness, Bitot's spot and conjunctival xerosis) is prevalent in less than 0.5 percent of the children in this age group, in part due to the massive dose Vitamin A supplementation in the neonatal period (at birth) and near total institutional delivery.

In their book, Gillespie and Goddad say Vitamin A deficiency causes increased morbidity and mortality among infants, children and pregnant women, poor growth of children. It also contributes to anaemia, they say. The NNMP survey results linked poor nutritional habits and weaning food choices to the sub-clinical deficiency.

Interestingly, this study linked the higher prevalence of clinical manifestations of Vitamin A like Bitot's spot in the eye to the mother being illiterate and to populations without access to sanitary toilets. Ascaris and hookworm infestation are often leading causes for Vitamin A deficiency and iron deficiency anaemia in the state.

All nutrition interventions have to go hand in hand with improvements to sanitation and access to protected drinking water, believes Dr Devashish Dutta of UNICEF. As much as 83 percent of rural homes in Tamilnadu, according to NFHS-3 surveys, do not have access to sanitary toilets and defecate in the open. Sanitary toilet refers to one where is not just clean inside, but also where refuse is cleanly disposed off, as in through a septic tank, sewerage. 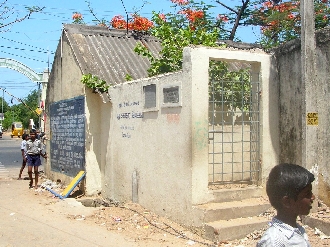 Locked toilets: Though there are 10 girls and boys toilets, according to the students, at the Adi Dravida School, they are out of bounds for students, who use an open ground nearby to relieve themselves. Pic: Krithika Ramalingam.

A large percentage of students do not use footwear while going to school. Hookworm enters the body through the feet of the person walking on an area contaminated with faecal matter. The worms anchor onto the small intestine and the blood loss over a period of time also leads to anaemia," he says. Though the state has its deworming programme, it could be scaled down and resources used elsewhere if people were to wear footwear before the stepped out of their homes, he adds.

Even in urban areas, only 33 per cent have access to flush toilets that are connected to sewerage, septic tank or pits, according to NFHS-3. A whopping 40 per cent have seen no improvement since the last survey of 1998 and continue to use toilets which are either shared between households or have no flushes/poured flushes. Twenty-six per cent continued to use open spaces for toilets.

This was no different even in targeted nutrition interventions like the ICDS. According to 2000-2001 study by TN-FORCES of the Anganwadis in 150 areas in Chennai showed that 87 percent of them had no access to toilet, an overwhelming 90 per cent did not have potable water, 90 per cent had no electricity and only 50 per cent were well ventilated with windows. Often, the centres are right next to public toilets or sometimes right next to garbage collection points, making hygienic Anganwadis a rarity," says Shanmughavelayutham of TN-FORCES.

In their 2007 study of 45 best practice Anganwadis, the State ICDS Project Office reiterated their older study: 26.7 per cent had no toilets, 20 per rcent had no access to drinking water, 22 per cent had furniture for early development activities, 20 per cent had no separate kitchen and 4 percent used classrooms for cooking, 62.2 per cent had asbestos sheets for roof and 33 per cent had no indoor and outdoor space marked for grossmotor activities for the 0 to 3 age group. This is the state in the best 45 of the 10,000-odd Anganwadis in the state. There are no norms or standardisations, no child-friendly toilets or safe areas or even adequate ventillation, says Shanmughavelayutham.

And that is why activists, policy analysts and funders alike say nutrition cannot be just a health-sector issue and have been working with the government in bringing about a convergence of various service delivery departments. All sectors like health, social welfare, nutrition, school education, women's development, civil society, water and sanitation, rights groups, universities and colleges, elected peoples representatives and the media at all levels need to make anaemia a priority as its effects are widespread, contributes significantly to a huge number of preventable deaths and illnesses and is expensive to deal with during pregnancy alone.

UNICEF is also working with the government in scaling up projects that link poverty alleviation to better nutrition. The simple fact is a person who is born with low birth weight, goes through childhood being undernourished will do poorly in school and perhaps drop out. When he is not educated, he will make poor choices for his family about nutrition and will perpetuate the cycle," adds Shanmughavelayutham.

Others agree. Iron tablets and nutritious mix are welfare-based schemes, and at best they can be a temporary solution to a problem that needs an inter-sectoral solution.

URL for this article
http://indiatogether.org/malnutr2-health