I came back from a trip to the USA in May with the usual: a large carton crammed with books. When I travel, this is invariably what I spend the most money and time on, and most willingly. Books. I can't keep up with those I have on my shelves, but the thing about reading is, there's always more. To be read, to be bought. And it's rarely that I can resist that temptation.

Not that I don't buy books in India. I do. But some titles are simply hard to find here. Besides, the convenience of amazon.com, or the always nearby second-hand book store, make it so much easier to get the hard-to-find ones in the US. So I buy, unmindful that our shelves at home are full, that the latest lot of book acquisitions still sits in piles, waiting for shelf space. In other homes, this has been grounds for considerable marital tension. I'm lucky that my wife is not just indulgent, but an even more avid reader than I am.

So by now we have built up a library of interesting books, and our friends are always borrowing from us. Question: why don't I borrow the books from a local library instead of buying them? Ah, but that's just the point. Libraries in Bombay are membership-only, far away, and therefore nearly inaccessible. Besides, they usually don't have the books I hanker after. Example: I'm currently looking for "Gates of Fire" by Stephen Pressfield. Something tells me it won't be in the Asiatic, nor in the American Center, nor in the British Council Library. I'd be happy to be proved wrong, of course. But past searches in those places for books I've been interested in have been futile, and I am sure "Gates of Fire" is the kind of book I won't find there.

There's also a discouraging memory I have from a trip to the Asiatic Library. In its catalogue, you can find drawers-full of cards for reports of inquiries into something or the other. There's the report of the Shah Commission which investigated the 1975-77 Emergency; the report of the Madon Commission that looked into the 1970 Bhiwandi riots; Justice Srikrishna's report about the 1992-93 riots in Bombay. There is even a report of an inquiry into an Alitalia plane crash in 1962 and one on -- this is true -- improving the marketing of fruits and vegetables in Bombay in 1932. 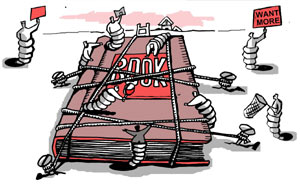 I found all these cards while searching for a report I needed while writing my first book. When I asked for it at the desk, I got a surprised look from the man behind it. "You want an inquiry report?" he asked. I nodded. Some minutes later, it was in my hand: dusty, but in perfect condition. In the early 21st Century, I was the first borrower -- the first, I am not making this up -- of a report issued in 1950.

This was a first-hand indication to me of what I knew in the abstract: how inquiry reports are ignored by public and government alike. But possibly worse is another truth it told me, if obliquely, about this fabulous library. So inaccessible is it to what a Bombayite would call the "aam janata" (the common man) that most of its books and journals lie mouldering, unread and untouched for decades. The Asiatic could be a treasure-trove -- if it was easier to belong to and use, and took care of its treasures better.

So I look back fondly to the years I lived in Austin, when I used both the Austin public library and the University of Texas libraries. I could walk to both, look for and check out books with utmost ease. What a great pleasure to have access to such fine collections of books!

The UT library, in an enormous Texas-shaped building on campus, was especially excellent. In seven years in Austin, I don't recall once that I did not find what I was looking for there. Yet as good as the UT library was, in some ways the public library was the more astonishing resource. After all, UT had to serve the needs of a community of students, faculty, visiting scholars and researchers: people to whom books and periodicals are daily needs. The public library served an entire city. To think that the administration actually sees a library as a vital part of the city, as important to the lives of its residents; to find such libraries not just in Austin, but in cities large and small across the USA -- this is the astonishing thing.

Because no city administration in India, to my knowledge, has ever seen libraries that way. Which is why I feel I have to buy my books. There is no library I can really use easily, here in Bombay.

All of which -- my weakness for books, the awe at libraries in the States, and the lack of them in India -- got me thinking.

Encourage reading and inquiry through a freely accessible library system, and you've laid a big stone in building a strong, vibrant democracy. And in recognizing that link, maybe there's a lesson for us in India.

First, about the ways in which libraries contribute to society. A reading, inquiring people is an asset to any country. Maybe that's a non-sequitur. But it's worth reiterating, because to understand how much of an asset, you only have to remember the vehemence with which criminal regimes from Hitler to Pol Pot have gone after books and their readers. "Intellectuals", those readers, and they had to be eliminated for being so. Because people who read usually ask questions, develop a respectful curiosity for other points of view. Those are attributes that dictators fear, for obvious reasons. But they are attributes that genuinely democratic societies value, recognizing the strength they bring to such democracy.

And libraries are the wellsprings for such attitudes.

None of this is particularly unusual, but as I said, it bears repeating. Because maybe there is a link between ubiquitous public libraries and the roots democracy has put down in the US. And in recognizing that link, maybe there's a lesson for us in India. Encourage reading and inquiry through a freely accessible library system, and you've laid a big stone in building a strong, vibrant democracy.

Second, just how did all these public libraries get established in the USA? Did the citizenry get together one day and decide to do it? Did city administrations do it? (And if so, why did that not happen in India?)

The answer, of course, is that American libraries did not get set up that way. Whether in the US or in India, city administrations are never that far-sighted. As with so many other things, it took the vision and drive of one man. Vision, drive, and an extraordinary degree of generosity.

That man was Andrew Carnegie, the Scots-born steel magnate of the late 19th century. Born in 1835, Carnegie was a multi-millionaire by his 40s. And also by then, he had started looking for ways to do something not many other multi-millionaires do: give away his wealth.

One idea he had was to set up public libraries.

His first was founded in 1881 in Dunfermline, Scotland, his birthplace. Over the next few decades, he established over 2800 more libraries. No typo there, I mean two thousand eight hundred. Nearly 2000 of these are in the USA, in every state except Rhode Island and including all 39 branches of the New York Public Library. Canada has about 150. Over 600 are scattered across Britain and Ireland. The rest are in the West Indies, New Zealand and a few other countries.

It's a remarkable legacy, especially when you consider that Carnegie was not known as much of a humanitarian. He was a ruthless employer, crushing unions, paying his employees poorly and constantly negotiating hard to pay them even less. Truly, he made his millions off the sweat of people who worked hard for very little. When he decided to give away money for libraries, he set up several in the steel towns where he operated, intending that his workers would use them. Their reaction was decidedly mixed. In researching such towns for her "Homestead: The Households of a Mill Town", the writer Margaret Byington found that while people were "very proud" of their libraries, they would often tell her: "We'd rather they hadn't cut our wages and let us spend the money for ourselves. What use has a man who works twelve hours a day for a library, anyway?"

Nevertheless, the libraries were established, though always under the famous Carnegie Formula: the town was required to subsidize the library annually, by an amount equal to ten per cent of what Carnegie contributed to build it. (Carnegie was also known for the strings he attached to any deal he negotiated). This money would be used for maintenance, salaries and buying new books for the library.

It wasn't just libraries either. Carnegie also generously endowed the arts, education (example: Pittsburgh's superb Carnegie-Mellon University), institutes pursuing peace, and more. By the time he died in 1919, he had given away about 311 million dollars, 90 per cent of his personal fortune. He had also inspired other men of wealth in similar directions: Salt Lake City's public library, for example, was set up with a gift of a plot of land and $75,000 from the mining entrepreneur John Q Packard.

A remarkable legacy indeed. And today, thousands of American communities benefit from it.

So I've also been thinking: what if we started a campaign to persuade Indian magnates to establish libraries in the same way, in India? In these days that we regularly hear about Indians appearing on lists of the world's richest human beings, there is no shortage of such magnates. Narayana Murthy of Infosys, Azim Premji of Wipro, Ratan Tata, the Ambanis, Adi Godrej ... the list goes on, and several of these men are known for their humanitarian sides as well. Why not take a few minutes to write letters to them urging them to establish libraries all over India?

Certainly I have a selfish motive in this -- I can hope to find books like "Gates of Fire" in such a library, instead of making efforts to buy them and further efforts to find space for them at home. But I also believe the impact of such a system of free public libraries will be profound: on literacy, on citizenship, on democracy, on India and our place in the world, and even on the way we think of ourselves.

Reading will do that. And more. Write that letter.

Dilip D'Souza writes regularly on the living conditions of India's donwtrodden people. He is a regular columnist with rediff.com. He is also the author of two books Branded by Law: Looking at India's Denotified Tribes [Penguin 2001], and more recently, The Narmada Dammed: An Inquiry into the Politics of Development.

URL for this article
http://indiatogether.org/libraries-op-ed