OPEN DEFECATION
In Kurukshetra, a new victory
The villages of Khanpur Kholiya, Masana and Sawla in Haryana have received the central government's Nirmal Gram Puruskar for ensuring that no one, not even a child, defecates in the open. Darryl D'Monte reports.
04 November 2008 -

The great battle of Indian mythology was fought here, but these days Kurukshetra is home to a more mundane combat - with deadly disease-inducing social and personal habits. In several villages in the district, there has been tremendous progress in sanitation. The village of Khanpur Kholiya, along with Masana and Sawla, has received the central government's Nirmal Gram Puruskar for ensuring that no one, not even a child, defecates in the open.

In South Asia, which has more people affected by poor sanitation than any other region of the world, as many as 1 million children under five years old die every year, many of them due to water-borne diseases linked to poor sanitation and hygiene. In India, 30 million in rural areas suffer every year from sanitation-related illnesses.

Why? Poor sanitation immediately conjures up images of poverty, but the reverse isn't always true. The South Asian office of the Water & Sanitation Programme (WSP) of the World Bank has often cited the paradox that good sanitation isn't necessarily related to income levels. Kerala, where per capita incomes are modest, has scored spectacularly on this front. And richer people sometimes are slow to shrug off poor past practices - WSP experts recalled a well-off Haryana farmer who proudly told them how he makes it a point to take his entire family out first thing in the morning in his Maruti - to the fields to perform their ablutions!

The current year, 2008, is the International Year of Sanitation. And SACOSAN 3, the third bi-annual South Asian Conference on Sanitation, will be held in Delhi from 16-21 November this year. As part of a media conclave prior to the conference, journalists from India and Pakistan - Bangladeshis weren't given visas in time - accompanied WSP experts and others to Khanpur Kholiya.

The visitors were heralded by a rustic band and the walls of the houses along the tiny lanes carried slogans like Swachha gav, swastha gav (A clean village is a healthy village). Once seated, in the spacious terrace of the well-appointed panchayat headquarters, the visitors were festooned with iridescent turbans or shawls. Jaswinder Kaur, the feisty sarpanch of the village and Surjit Kaur, the Mahila Mandal Pradhan, recounted how they had armed themselves for the battle against unhygienic practices. They recalled that the social awareness had been kindled through a movement to rid the men folk of the scourge of alcoholism. "Today my village is a clean village," asserted Surjit Kaur proudly. "All the women are with me."

Experts resort to the ungainly acronym ODF to designate a village as being 'open-defecation' free. Haryana has a long way to go by this measure, but this is not because the state is poor. The elected officials we spoke to pointed out that per-capita income in Haryana is among the highest for Indian states; the state attracts very high levels of investment in emerging industry sectors. Thus, it's not poverty that is keeping sanitation at bay. Rather, it is people's attitudes, which prevent them from realising the importance of good practices. Haryana could consider itself truly emancipated when its ODF-rank too becomes high. 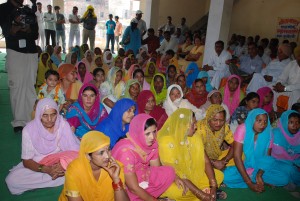 Photo: Women from Haryana's Khanpur Kholiya village in Kurukshetra, who were at the forefront of ridding it of open defecation.

The progress of the award-winning villages has been achieved through tremendous social mobilisation, largely through the perseverance of women. Women and children act as vigilantes, armed with lathis and torches, to enforce this diktat at dawn and dusk. We asked if anyone had refused to build a toilet inside his or her home. The women admitted that there were those who didn't have funds to construct their own toilet. The O P Jindal Grameen Jan Kalyan Sansthan, the philanthropic foundation set up by the steel magnate's family, provided funding to support the sanitation scheme. The toilets cost less than Rs.1000-1200. The Mahila Mandal served as a cooperative to extend loans.

There were others who didn't have the space to construct their own toilet. And for them - typically in clusters of four families - the panchayat provided the space. These were pour-water latrines, where one pit would serve a family of five for two years. The panchayat also decided not to create community toilets; Surjit Kaur says in the past this has been "not a very good experience" - presumably because of the lack of 'ownership' of such facilities, no one maintained them properly.

More than the actual number of toilets that needed to be built, it was important to imbibe the realisation of the need to build them. Initially, the men weren't motivated because they didn't suffer the same level of indignity as women in having to relieve themselves in the open. A Block Development Officer recounted how he had learned the importance of sanitation from his own experience in participating in the campaign. There were still 18 or 19 villages in the block where there were no toilets. Women had to wait for dawn or dusk to ease themselves.

The entry point of the campaign was the Community-Led Total Sanitation approach designed by experts. Briefly, the motivators ask villagers to draw an outline of their village with a stick on the mud, which begins as a fun exercise. Each is then asked to locate her house with white powder, leading to more merriment on the part of these barefoot cartographers. But then comes the whammy: they are asked to identify where they and their children defecate by placing a handful of turmeric powder on the spot, which leads to considerable consternation and shame. As a further exercise, a mother is asked where a child with diarrhoea will relieve himself or herself; this is obviously closer to habitation.

The motivators then take a pinch of the powder, empty it into a glass of water and ask who in the village would sip it. Obviously, no one volunteers, and the motivators point out that this is precisely what is happening, right under the villagers' noses, day in and day out, with disastrous consequences to child mortality and community health in general.

The area has other signs of hope. During a recent visit to a village in Kurukshetra to see the progress that has been achieved first-hand, I could not but marvel at the evident all-round prosperity. There were none of the tell-tale indices that bedevil other rural areas - broken down homes, half-clad and pot-bellied children, crippled with anaemia, and the like. Instead, there were pukka homes - some two-storeyed - and a few with cars and many more cycles. Tractors were still more abundant.

•  Taking stock of watsan
•  A model for sanitation

Jasbir Kaur, the sarpanch of Masana village, told visitors how she had use the analogy of flies to drive home the significance of sanitation. These pesky vectors couldn't discriminate between a latrine and food or utensils, and spread disease prolifically. Careless sanitation achieved much of the same unintended adverse health impact.

Media exposure - the local Kurukshetra newspaper front-paged our visit the following day - had helped considerably in the exposure to the problem and its solutions. But everyone in the village also cited the Nirmal Gram Puruskars, where no less than the President awarded the annual prizes to panchayat heads who had rid their village of open defecation. The women are careful that they should not merely rest on the laurels, however; Jasbir Kaur asserted the importance of maintaining toilets properly, lest people slip back into old practices - somewhat like the achievement of full literacy in Kerala.

In Masana, the panchayats hired women to maintain the toilets, who were paid Rs.3500 a month - an unimaginably high figure by standards of the average village in this country. It was a matter of community shame, she said, that Kurukshetra recorded a gender ratio of only 835 women for every thousand men, which obviously indicated widespread female infanticide. This had also motivated women to emancipate themselves, so as to check social imbalances, which created the right environment for a sanitation drive.

Toilets in schools had also led to a fall in the drop-out rate. Women's self-help groups had distributed cottage-made sanitary napkins to girls to inculcate hygiene, which was an equally important component of the programme. In Masan, there was an incinerator for proper disposal of these napkins. A napkin cost 80 paise, the cheapest possible, without compromising on quality.

The Kurukshetra success couldn't have been possible without the die-hard dynamo in the shape of Sumedha Kataria, the Additional District Collector, who took firm charge of us visitors, right up to the time we had completed a tour of the mythological sites in the town late in the evening. She stressed the role of teachers as agents of change and had addressed children herself, who were very receptive. Teachers had volunteered to spend time beyond their school duty hours on the campaign. Children had stickers with some five slogans on their notebooks, which served as constant reminders of the message. Villages carried slogans like "My daughter will only get married to a family where there is a toilet".

She also acknowledged the positive role played by the media, which had reported how she had once visited a village at 5 AM. The drive for total sanitation was a little like a 'maha-yudh', she said, candidly. Like in any battle, it is difficult to maintain the level of enthusiasm and the morale of the 'troops'. She is motivating banks to provide loans to construct houses along with toilets.

Kataria detailed the verification process of selecting Nirmal Gram Puruskars. A team with some 40-50 people would visit a panchayat and inspect it. This would be followed up by a smaller team, which would visit unannounced and make a final selection. Asked whether such campaigns depend, crucially, on charismatic and articulate leaders like herself, Kataria replied that it was indeed a matter of personal conviction. "A lot depends on leadership," she admitted. "I have grown through the Total Sanitation Campaign and grown with it, spiritually and emotionally. The show must go on."

URL for this article
http://indiatogether.org/kuru-health