DYING WATER BODIES
Kerala loses its precious Kenis
Keni, the miraculous mini well of adivasis of Wayanad in Kerala, is well on its way to becoming a part of history - a victim of rapid environmental decline of this once bountiful state. Shree Padre reports.
23 May 2013 -

The name Wayanad comes from two words, Vayal (paddy field) and Naad (land), meaning ‘The Land of Paddy Fields'. It is set high on the Western Ghats with altitudes ranging from 700 to 2100 metres from sea-level. The district has a considerable population of tribals. Keni, an amazing water body developed using traditional wisdom and which doesn’t seem to have parallels anywhere in the whole country, is found only in this district.

Kenis are located on wetlands, on the edge or middle of paddy fields. Cylindrical in shape, they have a diameter and depth of around one metre only. The wall is of a specific type of wood. During construction, these wooden parts are driven into the soil.

A Keni is not a property of a single family. It is a community drinking water source. Being a shallow water body, it doesn’t require a rope, pulley or pump to lift the water. The water source is just enough to dip the kodam, the round utensil used to lift water from wells.

Soil in Wayanad is clayey. As such, wells in low lying areas have water that is slightly stained. But the Keni water always remains crystal clear and transparent like glass. Not only that, a water body of the size of a hundred-litre drum gives more than thousand litres of water every day, round the year! 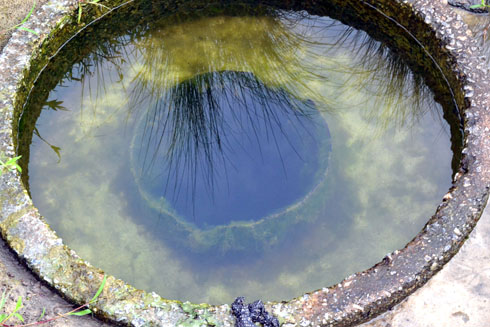 In some places, a layer of sand is found around the outer wall of a Keni. This might have been put to filter the inflowing water. Kenis retain the same level of water both during monsoon and summer. Generally as many as 15 â 20 families take water from one Keni. Once a kodam full of water is lifted from the well, it gets refilled in just a minute or two.

Dr E.J.Joseph, Scientist, Agriculture at CWRDM (Centre for Water Resources Development and Management), Kozhikode has studied Kenis in depth. He says, “In the entire district there might be 200 to 300 Kenis. No one seems to have counted them. According to some elders, there are some which may be 500 to 600 years old. In most cases they have used the bottom portion of the toddy palm (Caryota urens) for this. Though many of them have deteriorated and are de-shaped today, they are not completely destroyed.”

Adds Dr Joseph: “A surprising thing that I have noticed is that while the colour of water in the recently constructed concrete ring Kenis is slightly different, in older Kenis you see very clear and pure water. None seems to have studied the reason for this difference.”

The toddy palm stem would usually be cut a year before construction of a Keni. It would then be kept immersed in water for a long time. As a result, except the very hard portion, the inner core portion disintegrated and got washed away. Apart from toddy palm, Anjili (Artocarpus hirsuta), Amla (Phyllanthus emblica) and another tree called ‘Kori Maram’ in Malayalam were also used. If it was the Amla tree, the bottom portion would be excavated in square shape before being introduced into the Keni. Nowadays, getting a huge toddy palm stem of the required size is itself very difficult. As such, the development of Kenis using wood from theseÂ  has ceased over the recent decades.

Kenis retain the same level of water both during monsoon and summer. Generally as many as 15 to 20 families take water from one Keni. Once a kodam full of water is lifted from the well, it gets refilled in just a minute or two.

A decade ago, a government scheme called Giridhara was introduced to provide drinking water to adivasis. At that time, team leader George Mathew had located sixteen Kenis in Panamaram panchayat. “None of these are new. These must have been dug at least half a century ago,”Â  he pointed out.

In some of the areas wherever Kenis were situated earlier, the panchayat had deepened the dilapidated water bodies and inserted concrete rings to renovate the same. Lukose Jacob, Director, Hilda Trust, a Wayanad NGO points out that such interventions, done in the hope of development, have unfortunately led to problems in quite a few cases. Deepening has dried up a few Kenis altogether. While clean water was available from some Kenis earlier, renovation work has resulted in stained water. “Kenis collect water from the shallow soil layer. If you go deeper than five feet in these paddy fields, the water table remains deeper down. The Panchayat, without realizing this grassroot reality has deepened Kenis to 15 â 20 feet. As such, poor adivasis now neither have the old nor the new water source. These Kenis have dried up,” says Jacob. 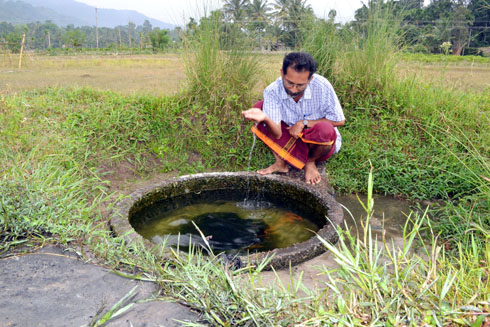 That was the situation a decade ago. Now, as paddy fields in Wayanad are increasingly being abandoned and large scale deforestation is on, the water table is receding deeper and deeper. This year, unprecedented drought has been reported from many parts. The number of Kenis has now dwindled to only a few.

There are two Kenis still remaining about a kilometre away from the Shiva temple of Trikkaipettah. Both have good water. Local resident, 55-year old Krishnan Kutty recalls that about 30 years ago, people from areas within one and half kilometer radius-around fifty families-were drawing water from here. Now, except the adivasis, all others have independent wells. Despite that, they take drinking water from Keni because the well water is not that good. Hailing these he says, “These haven’t dried up in any of the past droughts. Even during the unprecedented drought of 1983, this Keni gave water. It is like an ‘akshayapatra’. You go on taking water; it goes on refilling after a while.”

What is apparent from all of this is that earlier generation of adivasis had good water divining knowledge. The site selection was perfect. This is evident from the fact that if the location is shifted or the wells are deepened, it doesn’t catch water. It is perhaps a pity that not only have we been unable to acquire such knowledge, but have also failed to hold on to the resources that traditional wisdom yielded.

URL for this article
http://indiatogether.org/keni-environment