Train to nowhere
There is a strong case to reschedule the Kashmir valley railway line project, says Pavan Nair.
01 July 2004 -

The decision to expand railways into the Kashmir valley was a blunder. If I were a Kashmiri militant, I would be rubbing my hands with glee. The line when complete will present a linear indefensible target which can be attacked at will by a small insurgent group trained in the use of explosives. The kidnapping and murder of the Pundir brothers in June 2004 is only a beginning. Imagine when the rail line is all of three hundred and fifty kilometers long and trains are running. It will take a few more divisions of the Indian Army to guard the line to keep it open. The manpower required to keep security would be substantial and it would tie down security forces for guard duty. This is tantamount to playing into militant hands. 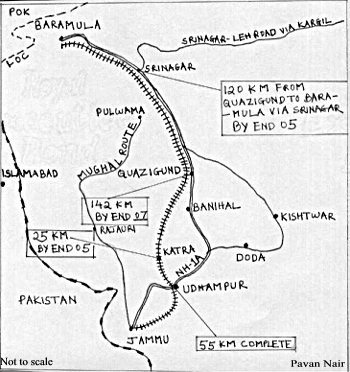 The rail line project was considered by various governments and kept on the shelf because it was too ambitious in engineering terms and at an estimated cost of Rs 6000 crores (1 cr = 10 millions), highly uneconomical. After 1989, attention was diverted to the security situation and no one even thought about it till the NDA government came to power. In the rush to push through mega projects, the rail link to Kashmir became another item of the India Shining campaign. Whilst the relatively easier section from Jammu to Udhmapur was completed in good time, the difficult hill section between Katra and Qazigund is slated for completion only by the end of 2007.

It makes very little sense to have the last section of the line in the Valley in place a full two years ahead. There is a strong case to reschedule the project.

The Kashmir Valley is connected to the mainland by National Highway Number 1A. This road which crosses the Pir Panjal Range at Banihal has been the lifeline of the Valley. With the Banihal Tunnel being constructed in the sixties, access to the Valley became secure. The Mughals used another road towards the West from Poonch, the alignment of which is still visible. This is a viable alternative route and can be developed at minimal cost compared to the cost of the rail line. Towards the East there is an approach into the Valley via Doda. Road communications are more than adequate and there is no crying need for another means of communication at this point in time. The Leh sector is now independently connected via the Rohtang tunnel so there is no valid reason for a rail line from a strategic point of view.

With an insurgency situation developing in the Valley in 1989, the National Highway between Jammu and Srinagar became an obvious target for militants. Inspite of a heavy presence of regular troops and para military forces, attacks on convoys have been a simple and successful highlight of militant strategy. One blast of an explosive device along a hundred kilometer stretch is sufficient to set off alarm bells in Delhi. When the UPA government was in the process of taking over, the militants made their statement by blasting a BSF bus. Does it therefore make any military sense to go in for a rail line which will involve redistribution of the limited security forces available to the state?

Road communications are more than adequate. The Leh sector is now independently connected via the Rohtang tunnel so there is no valid reason for a rail line from a strategic point of view.

There is no doubt that economic development is a crying need in the Valley. Electricity and water supply are in an apalling state. It is barely possible to read at night due to the low voltage. There are many other projects which can be taken up. Fruit processing, river transportation, manufacturing small electronic or plastic components are a few examples that require lower capital investment.

In the meantime, the gruesome killings have had their effect. The engineers have stopped work. How could they work unless fool proof security was ensured? Kashmir is territory in conflict. Less than 20% turned out to vote inspite of coercion by security forces. Many want 'Azadi'. What is missing is an understanding that the logic of militancy and state high handedness go together. Pushing through a rail line seems another example of this high handedness. The least we owe to the dead Pundir brothers and their grieving family is a stop to the current program and a rethink.

Pavan Nair is a retired army officer who served in Bangladesh, Sri Lanka, Kashmir and Antarctica. He works with the Pune-based NGO, Jagruti, on issues of women and child development.

URL for this article
http://indiatogether.org/kashrail-economy