On December 23, 2012 a three member Committee headed by Justice J S Verma, former Chief Justice of the Supreme Court, was constituted to recommend amendments to the Criminal Law so as to provide for quicker trial and enhanced punishment for criminals accused of committing sexual assault against women. The other members on the Committee were Justice Leila Seth, former judge of the High Court and Gopal Subramanium, former Solicitor General of India.

The Committee submitted its report on January 23, 2013. It made recommendations on laws related to rape, sexual harassment, trafficking, child sexual abuse, medical examination of victims, police, electoral and educational reforms. We summarise the key recommendations of the Committee.

Rape: The Committee recommended that the gradation of sexual offences should be retained in the Indian Penal Code, 1860 (IPC).

The Committee was of the view that rape and sexual assault are not merely crimes of passion but an expression of power. Rape should be retained as a separate offence and it should not be limited to penetration of the vagina, mouth or anus. Any non-consensual penetration of a sexual nature should be included in the definition of rape.

The IPC differentiates between rape within marriage and outside marriage. Under the IPC sexual intercourse without consent is prohibited. However, an exception to the offence of rape exists in relation to un-consented sexual intercourse by a husband upon a wife. The Committee recommended that the exception to marital rape should be removed. Marriage should not be considered as an irrevocable consent to sexual acts. Therefore, with regard to an inquiry about whether the complainant consented to the sexual activity, the relationship between the victim and the accused should not be relevant. 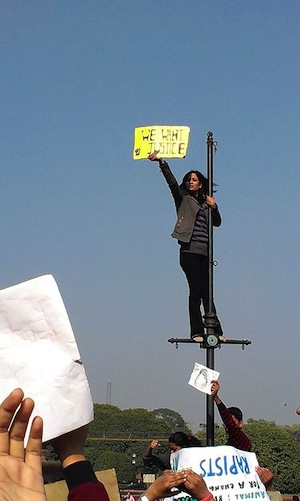 The UPA government asked Justice J S Verma to head a three-member committee after protests mounted in Delhi and other parts of India in latter December. Pic: Wikimedia Commons.

Use of criminal force to disrobe a woman should be punishable with 3 to 7 years of imprisonment.

At present, use of words or gestures to 'insult a womans modesty' is punishable with 1 year of imprisonment or fine or both under Section 509 of the IPC. This section should be repealed. The Committee has suggested that use of words, acts or gestures that create an unwelcome threat of a sexual nature should be termed as sexual assault and be punishable for 1 year imprisonment or fine or both.

Some of the key recommendations made by the Committee on the Sexual Harassment of Women at Workplace (Prevention, Prohibition and Redressal) Bill, 2012 that is pending in Parliament are provided below: Domestic workers should be included within the purview of the Bill. Under the Bill the complainant and the respondent are first required to attempt conciliation. This is contrary to the Supreme Court judgment in Vishakha vs. State of Rajasthan which aimed to secure a safe workplace to women. The employer should pay compensation to the woman who has suffered sexual harassment. The Bill requires the employer to institute an internal complaints committee to which complaints must be filed. Such an internal committee defeats the purpose of the Bill and instead, there should be an Employment Tribunal to receive and adjudicate all complaints.

The Committee opined that the offence should not be clubbed under the provisions of grievous hurt which is punishable with 7 years imprisonment under the IPC. It noted that the offence was addressed in the Criminal Laws Amendment Bill, 2012 which is currently pending in Parliament. The Bill prescribes a punishment of imprisonment for 10 years or life. It recommended that the central and state government create a corpus to compensate victims of crimes against women.

Offences against women in conflict areas: The continuance of Armed Forces (Special Powers) Act (AFSPA) in conflict areas needs to be revisited. At present, the AFSPA requires a sanction by the central government for initiating prosecution against armed forces personnel. The Committee has recommended that the requirement of sanction for prosecution of armed forces personnel should be specifically excluded when a sexual offence is alleged. Complainants of sexual violence must be afforded witness protection. Special commissioners should be appointed in conflict areas to monitor and prosecute for sexual offences. Training of armed personnel should be reoriented to emphasise strict observance of orders in this regard by armed personnel.

The Committee recommended that the offence of sexual assault should be defined so as to include all forms of non-consensual non-penetrative touching of a sexual nature.

The sexual nature of an act should be determined on the basis of the circumstances. Sexual gratification as a motive for the act should not be prerequisite for proving the offence.

•  How they fool us, the outraged
•  Rapist to victim: Marry me?

The Committee noted that the Immoral Trafficking Prevention Act, 1956 did not define trafficking comprehensively since it only criminalised trafficking for the purpose of prostitution. It recommended that the provisions of the IPC on slavery be amended to criminalise trafficking by threat, force or inducement. It also recommended criminalising employment of a trafficked person. The juvenile and women protective homes should be placed under the legal guardianship of High Courts and steps should be taken to reintegrate the victims into society.

The Committee has recommended that the terms harm and health be defined under the Juvenile Justice Act, 2000 to include mental and physical and health, respectively, of the juvenile.

Punishment for crimes against women

The Committee rejected the proposal for chemical castration as it fails to treat the social foundations of rape. It opined that death penalty should not be awarded for the offence of rape as there was considerable evidence that death penalty was not a deterrence to serious crimes. It recommended life imprisonment for rape.

Medical examination of a rape victim

The Committee has recommended the discontinuation of the two-finger test which is conducted to determine the laxity of the vaginal muscles. The Supreme Court has through various judgments held that the two-finger test must not be conducted and that the previous sexual experience of the victim should not be relied upon for determining the consent or quality of consent given by the victim.

The Committee has recommended certain steps to reform the police. These include establishment of State Security Commissions to ensure that state governments do not exercise influence on the state police. Such Commissions should be headed by the Chief Minister or the Home Minister of the state. The Commission would lay down broad policy guidelines so that the Police acts according to the law. A Police Establishment Board should be established to decide all transfers, postings and promotions of officers. Director General of Police and Inspector General of Police should have a minimum tenure of 2 years.

Reforms in management of cases related to crime against women:

The Committee recommended the amendment of the Representation of People Act, 1951. Currently, the Act provides for disqualification of candidates for crimes related to terrorism, untouchability, secularism, fairness of elections, sati and dowry. The Committee was of the opinion that filing of charge sheet and cognizance by the Court was sufficient for disqualification of a candidate under the Act. It further recommended that candidates should be disqualified for committing sexual offences.

India Together regularly republishes reports from PRS Legislative Research on bills pending in Parliament. A full list of such legislation can be found at www.prsindia.org.

URL for this article
http://indiatogether.org/justverma-laws