UPLIFTING A TRADITION
Islamic elegies for social justice
The rural Muslim women of Murshidabad district in West Bengal have circumvented religious curbs and successfully used a prevalent religious tradition to eke out a living as well as create social awareness. Ajitha Menon has more.
10 July 2008 -

Murshidabad (WFS) - Most ancient religions have imposed restrictions on women in some way or the other. But the rural Muslim women of Murshidabad district in West Bengal have circumvented the curbs and successfully used a prevalent religious tradition to eke out a living as well as create social awareness. In the process, they have given a boost to the traditional religious art form of 'Jaari Gaan' - elegiac poems that narrate Islamic religious stories of tragedy and martyrdom.

Rasina Bibi, 48, of Jibanti village, started rendering these poems about 18 years ago, breaking into a traditional male bastion. Earlier, only men rendered these elegies as they wandered from village to village collecting money in return. 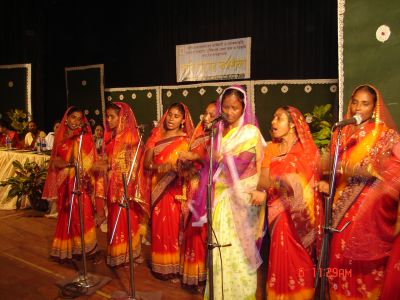 Rasina, who lives below the poverty line, saw a chance to earn a livelihood from this tradition. "With no other qualifications or ability, I realised that this was work I could do. We know these tales by heart. We hear them from childhood during the 'majlis' (religious gatherings). I thought, 'Why should men have a monopoly on reciting them professionally'," says Rasina, adding, "I started by reciting these poems alone. Other women were scared to join me. There was huge opposition, mainly from male troupe members, who felt threatened."

However, Rasina and others of her ilk could prevail because of the history behind the tradition. "Fatima Az-Zahra, the daughter of Prophet Mohammed, initiated the tradition of 'Jaari Gaan' to narrate stories of valour and devotion. After the tragic martyrdom of Imam Hussain, the Prophet Mohammed's grandson, in 680 AD at Karbala in present-day Iraq, his grieving sister, Zainab, continued the tradition as a movement against murder, deceit, treachery and reign of terror. It was the women who had started the tradition and, hence, there was no religious diktat to curb them from having equal rights to render the tales," says Dipak Biswas, folk song researcher.

After years of struggle, Rasina has been able to assemble a 10-member all-woman troupe and they recite poems at gatherings and get paid. Inspired by Rasina and her group, many more 'Jaari Gaan' troupes have emerged in the state.

•  Women - Personal Law Board
•  Moving beyond the Koran

Though 'Jaari Gaan' is practised extensively and although the 'majlis' take place regularly in different homes, the tradition of 'matam', or mourning for Imam Hussain as is practised in Shia Islam is not carried out here because in Bengal the Muslims rendering 'Jaari Gaan' are Sunnis. Of course, the women render the elegiac poems without the accompaniment of musical instruments and the mood at the gatherings is sombre.

After years of struggle, Rasina has been able to assemble a 10-member all-woman troupe and they recite poems at gatherings and get paid. Inspired by Rasina and her group, many more 'Jaari Gaan' troupes have emerged in the state, including those that comprise educated women from the upper-middle class. More than 10 to 15 women troupes from areas such as Lalbagh, Kandi, Hatpara and Jiagunj are now regulars at such 'Jaari Gaan' 'majlis' across Murshidabad and even elsewhere.

Interestingly, such is the social acceptance of these women that even government health agencies have begun to reach out to the Muslim communities through them. The female troupes deliver messages on social issues - such as maternal and child health, pulse polio campaign, HIV/AIDS and compulsory primary education - alongside their elegies of right over wrong.

"We are known to the villagers, as they come to listen to us. So, when we talk about pulse polio or the need for an education during our 'Jaari Gaan', their usual distrust turns into intent interest," says Aishwara Begum, 42, a 'Jaari Gaan' troupe member from Jibanti village.

Earning money was the primary consideration for the women who first ventured into public recitals, but it still does not pay much. A group (of around 7 to 12 women) earns not less than Rs.5000-6000 for one programme. "The money we earn, even with the stipend from the government for the campaigns, is not enough to take care of an entire family. But combined with our husband's income it goes a long way. Our children are clothed and they are getting an education. Giving up the 'burkha' (veil) and coming out of our houses was worth the effort," says Aishwara Begum.

The women always keep their heads covered while reciting the elegies, as a mark of respect. When the women recite at cultural programmes and shows organised by the government or other sponsors, they face a mixed audience. However, the mood still remains that of a religious gathering, in keeping with the traditional intent of 'Jaari Gaan'.

If the tradition has restored the dignity of the poor, the educated Muslim young women who have participated in its revival have also been inspired to do social good. "We don't need the money but we acknowledge that 'Jaari Gaan' is a part of our heritage and needs to be carried forward. It's a great tool for bringing people together to a 'majlis' where they can also listen to talks on larger issues," says Syeda Saba Athur, 27, a graduate, who sings with a troupe in Lalbagh.

"Our troupe doesn't charge for the performances. All our 10-12 singers are educated and come from upper middle-class families. The word 'Ja' from 'Jaari' means the agony of grief. These songs have a spiritually cathartic effect. They cleanse the soul. They are also a great way to conduct campaigns of social relevance. So we go wherever we are invited," says Syeda Julmimun Nisa, 39, of the troupe. 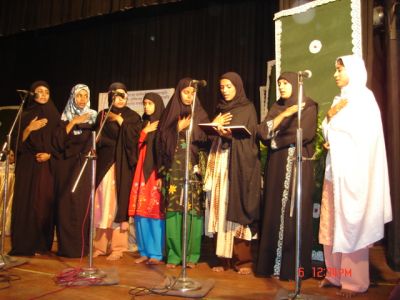 Another troupe from Lalbagh at a special 'Jaari Gaan' service. Pic: Soma Maity\WFS.

The women hold 'majlis' in their homes, where they practise together. Singers like Syeda Hizab Begum have started as early as the age of 15, learning at home. "We sing mostly in Bengali. 'Jaari Gaan' has found rendition in Bengali for years now. But the poems are also sung in Arabic, Urdu and Farsi," explains, Syeda Tarat Begum, 50, of Lalbagh.

"The songs express sadness. Imam Hussain's fight to save humanity and the truth is well known. These songs tell those stories. They reinforce faith and bring peace during Muharram, (the first month of the Islamic calendar) when Imam Hussain was martyred," says Begum. Sadness is the key to 'Jaari Gaan'. The songs are soulful, touching the core of one's heart. The tragic stories often bring tears to the eyes of the listeners.

'Jaari Gaan' has not only led to the emancipation of women like Rasina and her ilk, it has also ably combined religion with matters of social relevance, bringing sanction from village elders and high priests alike on issues which may otherwise have been considered taboo.

Admits Anwar Alam, an elder of Jibanti village, "It's good that young people are also now coming forward to understand Islam and events related to it. The women need to be given credit for this."

Ajitha Menon is based in Kolkata and writes human-interest articles.

URL for this article
http://indiatogether.org/jaarigaan-society