The lack of awareness about a traditionally peace-loving species and inadequate safeguards to protect their natural habitats and corridors are posing a serious threat to the continued survival of leopards in and around the city of Guwahati. Ratna Bharali Talukdar reports.

Leopards, traditionally living in Guwahati city, are now afraid to let out their territorial roar. The habitats of this big cat species are no longer their own, but have been usurped by humans. Peace-loving animals, the leopards in the city are trying their best however to avoid a situation of conflict and co-exist peacefully with the residents of a city that has been growing in the most unplanned and haphazard of ways.

Unfortunately, panic among city residents at the mere sight of a leopard, mostly triggered by wrong perception and wrong media projections of this peace-loving animal as a ferocious beast, is posing a grave threat to its existence and coming in the way of a happy co-existence.

Animal lovers and wildlife experts have already pressed the alarm bell and say that it is high time to draw up an immediate and strategic plan of action, so that this unique species can be protected in and around the city that has expanded rapidly, destroying their indigenous habitats in the hilly terrains and foothills.

An alarming number of 11 leopards, sighted in different human settlements in Guwahati, were captured last year and in January 2015 by the Department of Forest and Environment and subsequently rehabilitated in the Assam State Zoo, Guwahati that is being seen as an alternative space for their survival. However, that is a certainly not an alternative that is in the best interests of the species.

“In the Zoo, we have limited space to provide a home for big-cats. It has the provision to accommodate only 7-8 leopards, whereas we have to accommodate 22 leopards now, in a congested space, following all the recent instances of capture,” says Chandan Bora, the Divisional Forest Officer of the Zoo.

Unfortunately, five of these captured leopards, including two sub-adults, one adult female and two adult males have died so far. All, but one, died due to ‘traumatic injury’, as recorded by the zoo authority.

Understanding the leopards of Guwahati

The city of Guwahati, which is also considered the gateway to northeast India, has a permanent population of 9.63 lakh according to the 2011 Census. The city has a total municipal area of 216 square kilometres. Apart from its permanent population, it also accommodates a large number by way of a floating population that daily visits the city for different purposes. The Guwahati Metropolitan Development Authority has an administered area of 264 square kilometres.

It is not a very distant past when the green belts of Guwahati city covering hills and plains were considered to be among the safest places and corridors for the big cats, which traditionally prefer to live near human habitations. Ten notified Reserve Forests in and around the city used to support plenty of space for flourishing of floral and faunal diversity.

However, it is important to note the fact that reports of human-leopard conflict in the Amsang and Rani reserve forests, which have sufficient forest cover, prey base and water sources, are almost nil. Deepor Beel reserve forest, which is not home to the big cats, is used by them as corridors.

In addition to these, leopards were also found in the various hilly stretches including Nilachal Hill, Narakasur Hill, Chunsali Hill, Nabagraha Hill and Geetanagar Hill. The green cover is also home to vivid avian species, snakes and reptiles, barking deer, monkeys, other cat families including civet cat, lesser cat etc. along with other faunal species.

With the growth of the city, large parts of these notified reserve forest cover have been encroached by people migrating to the city for livelihood. Known for their unique camouflaging capacity inside the jungle, leopards have become frequently visible in these pockets -- mostly when sub-adults get separated from their mothers and search for new territories for their own along the corridors, or when adult females with calves visit nearby human habitations for easy prey.

CCTV cameras installed in various houses and business establishments as a protection measure have recorded their presence too, especially during nights when they search for prey. Such instances often lead to massive hue and cry among citizens, forcing the Department of Environment and Forests to trap them, and finally rehabilitate them in the state zoo.

Even then, people crowd around the cages in which the leopards are trapped and often shout in excitement causing severe psychological trauma to the trapped animal. This is of particular concern to nature lovers and animal rights activists. In the clamour following its capture, the horrified and nervous animal starts to hit the iron rods of the cage in fear, which causes serious injury to the brain, and eventually leads to the death of the animal inside the zoo. 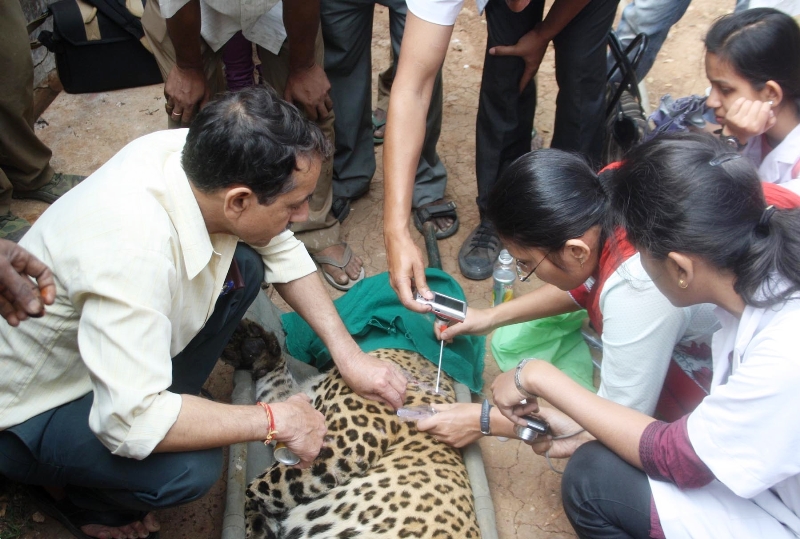 A sub-adult female captured from Kailipara area on 7 March 2014, that died in the zoo due to traumatic injury. Pic: UB Photos

Bibhab Talukdar, Secretary General of Aaranyak, an organisation dedicated to work for wildlife management and conservation, is of the opinion that a general curfew should be announced by the district administration for a while in the locality where a leopard is trapped: to restrain people’s movement, to prevent its stress, trauma and possible attack arising out of such a situation.

While citizens create a shrill ruckus whenever a leopard is sighted, there has not been a single incident of leopards attacking a human being, or even taking away their pets. They only hunt the stray dogs or unattended goats as prey, clearly indicating that they are happy to maintain a peaceful co-existence with human life in the city. On a single occasion alone in November last year, when a leopard was trapped in a cage in Gauhati University near Jalukbari Reserve Forest, the horrified animal attacked a forest official as the latter came very close to it. However, it was not a fatal incident.

“Leopards are territorial animals, live in contiguous habitat and need sufficient space.  Although they prefer to live near human habitations, they do not disturb human life, and take away animals very rarely, only when there is an acute dearth of prey.  In fact, the leopard has a wide-ranging prey base including barking deer, monkeys, birds, stray dogs, rats and even frogs. They have a positive role in maintaining bio-diversity,” says Professor Prasanta Kumar Saikia at the Department of Zoology of Gauhati University.

The food-chain of the species, however, is closely related to human settlements. Their prey base includes among other things small cat families such as the civet cat, lesser cat and others that in turn depend on small animals and birds reared by humans. In cities, stray dogs form the leopard’s favourite prey due to the ease of capture.

Professor Saikia is of the opinion that an effective awareness drive for citizens would help improve the situation and make the city wildlife friendly city. For example, it should be known that leopards tend to shift their calves every 15 days to protect them from other animals. During this period, a mother may stray into human habitation in search of easy prey. If the mother is trapped, there is every possibility that her calves will die, he points out. Erecting high fencing or boundary walls do not help in preventing leopards from entering human habitation, as they are good climbers too.

Saikia also elaborates on two unfortunate experiences that he encountered recently within the boundaries of the Gauhati University itself. The hills, which are adjacent to this University and extend up to Assam Engineering College, both in the Jalukbari area, have traditionally provided safe homes for this unique species. However, during November last year, night movements of two sub-adults who tried to come out in search of new territory through their corridor were reported.

“The news spread immediately, creating panic and clamour among the students and their parents. This led the university authorities to seek help from the Department of Environment and Forests, which subsequently trapped one of them. The other died as it tried to cross the road towards Tetelia area of Gotanagar Reserve Forest and was hit by fast moving vehicles. As I stay in a quarter, I had had the opportunity to see both of them moving here and there during nights, and it gave me immense pleasure. They were never harmful to us,” recalls the professor.

The one trapped and rehabilitated in the zoo, also died eventually due to “traumatic injury”. Saikia insists on protecting these corridors at any cost by making sufficient arrangements to avoid such unfortunate events.

Far from having safeguards in place, the forest and environment department is yet to come out with a systematic survey to figure out the actual size and population of big cats and other wildlife species in the vicinity of the capital city. The department, however, is planning to carry out an extensive survey using camera traps. Meanwhile, a steering group has been formed for carrying out a ‘sign survey’ to know more about leopard concentration from basic indications; this is likely to begin as soon as the rainy season arrives.

Meanwhile Saikia has already started a survey of leopards and its prey base in greater Guwahati area, involving students of Animal Ecology and Wildlife Biology, a course introduced by the department. Students equipped with tools for camera trapping are already in the field. The study is likely to end during July/August this year, he adds.

The university is also entrusted with a Wildlife Trust of India (WTI) project titled “Leopard-human conflict mitigation though community participation;” the working team includes Professor Jatin Kalita of the Department of Zoology, Professor Prasanta Kumar Saikia, Dr Dilip Chetri, Director of Gibbon Conservation Center, Dr. Abhijit Das of the Wildlife Institute of India and Radhika Bhagat of WTI. Mridul Bora, a Masters student of the department, is the Coordinator of the project.

The project aims to initiate vigorous awareness campaigns in vulnerable areas of the city, a signature campaign among the students, mobile campaigns, wall writing using aerosol paint, and installation of permanent banners under the theme of “Save the Phantom.” The future of the species now rests to a significant extent on the success of these initiatives.

URL for this article
http://indiatogether.org/human-leopard-conflict-in-guwahati-city-environment