OPINION
Honest is, as honest does
Integrity, in the job of the Prime Minister, demands putting national interest above partisan politics and personal loyalties. By that standard Manmohan Singh can't be called a "man of integirty", writes Madhu Purnima Kishwar.
14 December 2010 -

Today, the Indian media - both print and television - is focusing on the recent corruption scandals involving the UPA Government with unusual zeal. However, I fail to understand why almost every commentator, every TV anchor, every editorial writer feels compelled to pay ritual obeisance to the "personal honesty and integrity" of Dr Manmohan Singh while dealing with the scandals emanating from his Cabinet colleagues. They do so even when there is clear evidence that the Prime Minister was well aware of various shady deals, as in the case of telecom scam, and that he did nothing to stop the brazen economic crimes indulged in by his ministerial colleagues over the last six years.

Corruption is not only about personally accepting monetary bribes and stacking them away in hidden bank accounts overseas, buying benami properties or accepting diamond sets for your wife. Corruption can come in insidious avatars, such as knowingly turning a blind eye to the misuse the entire machinery of governance to serve private ends of a few individuals, even to the point of endangering national security. For example, not a single person has been punished thus far for supplying sub standard bullet proof jackets to the police handling the 9/11 terrorist attack in Mumbai. Not surprisingly, we are right now witnessing yet another scam involving sub standard bullet proof vests. 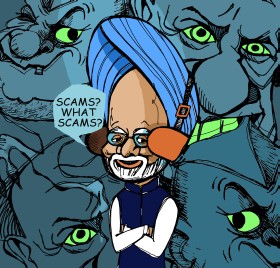 People attribute his pliability to the fact that the prime minister was appointed and not elected. (Illustration by Farzana Cooper)

Dr Manmohan Singh cannot escape responsibility for appointing people with dubious credentials to occupy key positions of power - starting with the appointment of Pratibha Patil as the President of India. This despite the fact that that Congress leaders of her own district protested vehemently against her appointment because of her and her close kin's direct involvement in criminal cases. Thereafter, all key institutions, including the Election Commission, the Central Vigilance Commission have been filled with people whose credentials have been questioned not just by the opposition but also the media and respected public figures.

He has also provided key portfolios to people with a proven track record of brazen corruption. For example, IAS officer, Mr Lalli the CEO of Prasar Bharati that manages Doordarshan has been guilty of countless corrupt deals and practices. Despite numerous agitations by the staff of Doordarshan to get him punished, he continues lording over the institution because he is supposed to have the PM's backing.

This regime has also gone out of its way to protect those judges of the High Courts and Supreme Court who have such serious corruption charges against them as to merit impeachment and criminal trials. Justice Dinakaran of the Karnataka High Court was saved from the wrath of and boycott by the legal fraternity of Karnataka by being transferred to Sikkim High Court despite loud protests by people in Sikkim. Judges who are alleged to have shared in the loot of Provident Fund of class 1V employees in UP have not been subject to investigation, leave alone punishment. One of them retired after serving a full term in the Supreme Court. The kingpin of the scam who later provided evidence of the complicity of the judges died under mysterious circumstances in jail.

Supreme Court Justice Sabharwal was likewise protected from prosecution even though the allegations against him during UPA's first term were no less serious than that of Kalmadi. He is alleged to have ordered demolition of numerous commercial centres and complexes in Delhi in order to benefit his son's investment in high end malls, causing havoc for lakhs of small and big commercial property owners of Delhi.

The CWG scam is not just about misappropriation of funds through inflated bills and money being paid to bogus companies. It all started with the politician-contractor mafia being allowed to violate all environmental laws to convert Yamuna floodplains into prime real estate by building luxury apartments in the name of Games Village. This happened despite the High Court ban on all construction activity on the floodplains.

It needed the influence of people far more powerful than Kalmadi to persuade the Supreme Court into over ruling the considered view of the High Court and ensuring that Environment Minister Jairam Ramesh looked the other way when all environmental laws were being brazenly flouted right under his nose to build high rise apartments and other commercial structures on the floodplains. The game plan behind building luxury apartments on the forbidden land became obvious from the fact that the builders had to be whip lashed into completing at least half the apartments before the Commonwealth Games. They were obviously given to understand that the CWG was merely a fig leaf for converting floodplains into prime real estate in the heart of Delhi.

The choice of the company that built the Games Village, the names of its real owners, its unknown and known partners, and the list of its known and unknown beneficiaries will reveal a scam more insidious than the Adarsh Housing Scam of Mumbai which involved Congress Party CM and other politicians, top ranking officials of the armed forces and bureaucrats cornering luxury apartments in a prime location in a housing society set up in the name of Kargil widows. In this case too, the only visible action taken by the Prime Minister is to replace the Chief Minister of Maharashtra. No sign of any heads rolling as yet.

Or take the example of the most politically sensitive state of Kashmir. Manmohan Singh allowed an anti-Omar agitation to turn into an anti India agitation much against his own counsel, all because he dare not sack Omar Abdullah from the CM's post even when the entire Valley rose in revolt against his high handed, corrupt and callous regime. Senior Congress leaders admit in private that Omar cannot be touched since he is a buddy of Rahul Gandhi. Dr Singh knows well that Omar's continuation has given a new lease of life to the Pakistan-inspired separatist and terrorist movement in Kashmir.

People attribute his pliability to the fact that the prime minister was appointed and not elected. He has never won a Lok Sabha election. But that cannot be used as an excuse to justify overlooking such gross mismanagement and loot as well as the political drift one witnesses even in areas involving national security.

In fact, his defeat in the one and only election he ever fought is related to his lack of personal integrity. He was defeated in the predominantly middle-class South Delhi constituency because people in general and Sikhs in particular were enraged when Manmohan Singh denied the role of the Congress in the 1984 anti Sikh carnage and instead attributed the 1984 massacre to the RSS. The RSS may well be guilty of many other communal riots but the credit for the 1984 massacre goes entirely to Congress politicians, including Rajiv Gandhi who even justified the killings saying: "when a big tree falls, the earth is bound to shake." The Congress Party also ensured that those who masterminded and executed the 1984 pogrom did not get punished.

Similarly, in the case of Gujarat riots, the Prime Minister happily joined the chorus initiated by his boss pillorying Narendra Modi as "Maut ka Saudagar" even though it is well known that Congress party cadres merrily joined the riotous mobs unleashed by BJP--RSS combine in Ahmadabad and elsewhere. This failure to own responsibility for the conduct of his party men and passing the entire responsibility on to Modi is in large part responsible for the lack of credibility of Congress Party in Gujarat and the severe erosion of its political base in Gujarat.

Likewise, getting a Rajya Sabha seat from Assam claiming he is a resident of the state when he has never had any such connection with Assam is a definite indicator of questionable political integrity.

A PM who compromises national interest, as in Kashmir, just to indulge the personal fancy of the PM-in-waiting, a PM who looks the other way while his Cabinet colleagues brazenly loot public funds and get away with extorting thousands of crores by way of kickbacks, a PM who is widely perceived and lampooned as a "rubber stamp" does not merit being called "an honest man" or a "man of integrity"; in his job, integrity demands putting national interest above partisan politics and personal loyalties. Integrity also involves taking full responsibility for all his acts of commission and omission which have earned UPA II the dubious distinction of being publicly named as the most corrupt and rudderless government in post independence India.

Madhu Purnima Kishwar is Professor, Centre for the Study of Developing Societies and the founder of Manushi

URL for this article
http://indiatogether.org/honest-opinions