Hi-tech, low nutrition
P Sainath reports on the serious problem of rural hunger in Andhra Pradesh, and the politics of free lunches.
Part I : A gruel-ing season
01 June 2003 -

Kondapur is an odd sight this morning. People crowd around, anxious to get their main meal of the day. Many hope to eat and then rush out in the desperate search for work. Quite a few households lie locked up, their residents having left the village. A big group of migrants has just returned from Mumbai. Including a few joginis who had worked at a construction site there. Not far from them, runs an optic fibre cable. A symbol of hi-tech progress in Andhra Pradesh.

At this point, its not the cable that has the crowds attention. But something else We dont know who has set this up, says one of the joginis. But its a great help to us.

This is a gruel centre feeding the hungry. Just one among over 200 such centres spread across Mahbubnagar and Anantapur. But unique in a sense. Its been set up by an independent group of young journalists and academics.

The optic cable is not far from where the gruel queues collect. A powerful new technology running through some of the districts oldest problems. The young group of journalists were meeting here belongs, physically, to the world of the new technology. But theyre making a sensitive effort to connect with the older world of hunger and deprivation.

In Gurrakonda, Sarnamma prepares the gruel. Shes got three daughters and a son and lives on a widows pension of Rs. 75 a month. These days she does somewhat better, getting a daily wage to cook the ganji for the poor in this village. Sarnamma needs that gruel as much as any one of the over 200 people she ladles it out to. This centre, too, is funded by the group of journalists.

Anyone who wishes to join us can do so, one of them told me in Kondapur. Hes a founder member of the Citizens Collective, as the group calls itself. Its open to all. We were appalled at the extent of hunger amongst villagers at this time. We wanted to do something about it. And were inspired by some of our seniors. Including two well-known journalists in Chennai who encouraged us to launch off.

We are not an NGO, he says. There is no corporate, government or institutional donor funding. We have sought none. Were working journalists and cannot run a structured system beyond our work. Theres no overheads, no receipts, no paperwork here. Hence, we only approached those we knew personally, for funds. He stresses that though most of them are journalists, the academics are a vital part of the core group.

The Collective runs on a transparent, non-partisan basis. Yet, we do acknowledge that weve taken help from those already in the field. Weve never set up a gruel centre before!

When does the centre close? says Sarnamma in Gurrakonda. When the gruel runs out. Then we think of the next day. As she speaks a number of children show up carrying more than one vessel. There are some male adults who do not wish to stand in line. They see it as hurting their dignity. And so, says Ramulu of the Andhra Pradesh Agricultural Workers Union in this district, they send the children instead. This makes calculating the numbers a little complex. If you watch these kids, youll see them handing over much of that gruel to the adults at home. 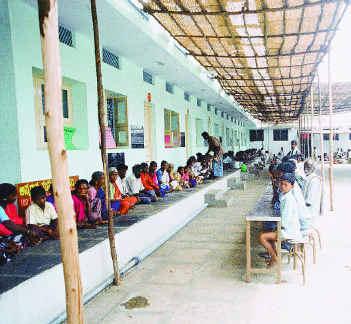 Most of those contributing to the centre will not get to see whats happening here, but their money is working well. It costs around ten thousand rupees for each centre to give 200 people gruel for a month. The Collective has already kept two centres running for close to 50 days. Now it has just set up a third.

How did it begin? I think meeting up informally at the Asian Social Forum (in Hyderabad, January 2003) was a starting point, says Uma Maheshwari. Shes a freelance journalist and Collective member. Maybe we were not yet a group then. But soon we began to meet on issues like a protest on the Iraq war; on communal violence. And something of a group began to take shape. Reports in the newspapers and their own findings gave them a feel of what was going on. The Indian language press seems far ahead in covering these issues, she says. We felt we had to respond to the distress. Fellow journalists from other publications too, did respond when approached. Friends from Eenadu, Newstime, the New Indian Express and elsewhere.

Quite a few employees of The Times of India and The Hindu gave hundreds of rupees each. Journalists do not earn great salaries. Yet, one or two gave sums as high as Rs. 5,000. These included people who differ with our views on a lot of things, says Aniket Alam, a journalist with The Hindu, Hyderabad. He too, is part of the Collective. Even people we do not know so well, responded generously.

The plight of people here may not have moved the state government. But it has touched the idealism of others. The way some individuals have acted in the face of public distress has also been striking. Circle Inspector M. Narayana of Kothakota mandal is a tough, no-nonsense cop. But he was amongst the first to come forward and aid the gruel centres that sprang up in his zone.

Media persons from other cities also sent in money. So did alumni of the Asian College of Journalism, Chennai and others. As word got around by email, more contributions came in, including one of Rs. 5,000 from a woman in Chennai. Her son in Hong Kong had heard of the group and asked her to send in his sum.

But all the contacting was done on a personal basis. Not on organisational lines. And they tried to focus on Mahbubnagar where hunger has gripped the old and the very young left behind as lakhs migrated.

They could not have chosen a better place. Inequality, always a feature of this region, has deepened sharply this past decade. And with it, hunger and despair. New forms of bondage have joined the old ones. Take Chinnaiah, for instance. Hes first in the queue in Gurrakonda. A potter by caste, he cannot afford to continue his craft. The farm crisis has destroyed the old barter system he had with his regular clients. He gave them pots, they gave him grain. Now the farmers have no grain to give him in return for his pots. But his obligations within the village remain. Tradition requires him to give two free vessels to each village wedding. So now I buy the pots, he laughs. I am paying for my own traditional work.

The plight of people here may not have moved the state government. But it has touched the idealism of others. The Collective are not the only group in the field. The Telugu daily, Prajashakti, has been running two centres since early March. They too, have been overwhelmed by the response. For instance in Kanimetta village of Kothakota mandal where the older people are quite desperate.

The way some individuals have acted in the face of public distress has also been striking. Circle Inspector M. Narayana of Kothakota mandal is a tough, no-nonsense cop. But he was amongst the first to come forward and aid the gruel centres that sprang up in his zone.

What made you donate a quintal of ragi to a gruel centre? we asked him. I come from a poor family myself and know what hunger is. My family are small farmers in Nizamabad. In Mahbubnagar, lots of people have migrated. Even if there is some agriculture, many of those left behind are too old to do ploughing or other rigorous work. I felt it was my duty to help.

The rule seems to be that if members of the public get to know whats happening, they do want to help, says one of those assisting at a gruel centre here.

In short, if the media do their job, the public will respond.

The issues dont end there. As one long time activist puts it: There is always the risk of being trapped in a relief mode. The problems of this region lie too deep to be banished by these centres. No matter who funds them. However, in the face of such hunger here and now, they matter a great deal to those going to them.

The structural inequities of this region run much thicker than the gruel. Yet the idealism that sparked these ventures does more than just fill hungry stomachs for the time being. It inspires others by its unselfish example and holds out hope of even more effective public action in days to come.

Part I : A gruel-ing season

URL for this article
http://indiatogether.org/gruel2-op-ed