ENVIRONMENT/TRANSPORT
Grey skies looming over colourful roads
Despite the inconsistencies in pollution data as well as measurement approaches in different Asian cities, there is now sufficient knowledge about the health risks of rampant and unchecked levels of motorisation, particularly in India's cities. A workshop for journalists at Indonesia sounded the warning bells again, writes Darryl D'Monte.
20 January 2007 -

At the best of times, experts discuss the most serious issues in the narrowest scientific terms, often comprehensible only to their peers. Environmental issues in general, and pollution in particular, suffer on this count. Asian journalists attending a workshop last month on "Better Air Quality" in Asian cities, organized by the Asian Development Bank (ADB) in Yogyakarta, Indonesia, were cautioned right at the outset that it would be wrong to single out any city in the region as being the worst polluted in this respect, although charts identified several offenders.

The absence of an effective mass rapid transport systems and intra-city railway networks have resulted in people using their own vehicles to commute to work.

•  Pune BRT's stuttery start
•  Clearing the air in our cities

Cornie Huizenga, who heads the secretariat of the Clean Air Initiative for Asian cities, under the aegis of the ADB in Manila, went a step further and exhorted the journalists: "Don't ask which is the most polluted city in Asia!" They subsequently learned that at the earlier bi-annual event in Agra in 2004, a Wall Street Journal correspondent had dropped in at a session, saw a graph displayed in a PowerPoint presentation, and filed a report identifying Manila as the worst culprit. Huizenga took great pains to explain that it all depended which parameter was being examined  the varying particulate matter (PM) sizes, different pollutants etc.

All multilateral organisations are wary of treading on any country's toes for fear of being accused of targeting it. Some years ago, for instance, when the UN Development Programme started its excellent annual human development reports ranking countries according to these alternative indices, one country actually terminated the UNDP office in its capital! It is after the debacle at Agra that the ADB is steering clear of listing countries in order of demerit. Jitendra Shah, an air pollution expert from the World Bank based in Thailand, only added to the confusion when he sought to distinguish between "ocular" impressions of air pollution (a la Delhi, where it has apparently improved) and the scientific facts (nitrogen dioxide and sulphur dioxide aren't visible).

He also cited how the monitoring and measuring methods and equipment varied from country to country, city to city. Singapore, for instance, monitored its ambient air quality 24 hours a day, while certain other cities did it once a day. Bangkok was better off now, with improved public transport, though it was still pretty bad. With the banning of two-stroke scooter engines in Delhi and the switch to CNG, things had certainly improved. 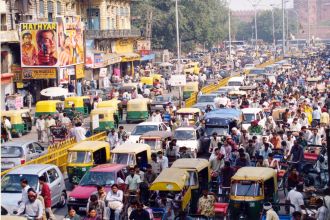 Vehicles and people; an intense scene on the road. Pic: CSE.

While the popular impression is that urban air pollution takes its toll of people's health, the implications for morbidity are not apparent. According to M Krzynowski, the Regional Advisor on Air Quality and Health of the WHO, there were 777,000 deaths due to such pollution  specifically, PM  in the world annually, of which a staggering 531,000 were in Asia. In Delhi, the sources of PM were mostly wood fires, followed by diesel, a fuel which is unfortunately gaining in popularity due to its lower cost. Dieter Schwela, Senior Scientist at the Stockholm Environment Institute in York, UK, showed a slide in which Delhi had the worst larger particulate matter indices (PM10, where 10 is a measure of size) among the Asian cities surveyed at 170 microgrammes per metre cube (µ/m3). Tokyo figured the best in this respect, while Mumbai fared better with 90. The Asian urban average at 100 µ/m3 was five times the US average. However, these pollution indices excluded the impact of smaller PM2.5 particulates which were "everywhere, with a hemispheric presence". Indian cities do not gather PM2.5 data.

The experts at the meeting all observed that even given the inconsistencies of data, there was now sufficient knowledge about the nature of the problem; what was missing was the ill to do something about it. As Anumita Roy Chowdhury from the Centre for Science and Environment (CSE) in Delhi stated, the question is "how to translate science into effective public policy". In India, some 15 studies had helped the judiciary enforce the right to life and a clean environment in relation to air pollution. There was need to break the resistance of the political class and business to such change.

At the height of its clean air campaign in Delhi, the CSE faced a great deal of flak from the Tatas and others due to its criticism of diesel as automobile fuel. While industrialists claimed that they were using low-sulphur diesel as was the case in Europe, the CSE showed that the EU used ultra low-sulphur diesel, which was less harmful, but more expensive. As Axel Friedrich, who heads the Environment and Transport division of the Federal Environment Agency in Germany emphasised at the conference, "Sulphur is the lead of today."

The ADB position paper on India makes no bones about the motorization of the country and the connection to pollution and toxic emissions in particular. It points out that India has seen a rapid rise especially in motorcycles. (Even though two-wheelers are not running on diesel, they emit toxic gases, like all other vehicles.) "The total number of registered motor vehicles in India has increased from 1.86 million in 1971 to 67 million in 2003," the ADB paper states. It also says that motorized two-wheelers (motorcycles, scooters, and mopeds) account for over 70% of the total registered fleet that will clearly impact on carbon monoxide (CO) and hydrocarbon (HC) emissions. The absence of an effective mass rapid transport system (MRTS) and intra-city railway networks have resulted in people using their own vehicles to commute to work. The proportion of buses to the total registered fleet has fallen from 5% in 1971 to 1.1% in 2003. Correspondingly, the proportion of private vehicles (two-wheelers and cars) to the total number of registered vehicles in India has increased from 65% in 1971, to 84% in 2003.

Going further, the paper notes that in 2003, 23 out of 35 metropolitan cities accounted for about 1/3 of the total 67 million vehicles registered in the country. "About 45% of the total cars in India are confined to these metropolitan cities... In the five major metropolitan cities (Mumbai, Kolkata, Delhi, Chennai, and Bangalore), the growth in registered motor vehicles has outpaced population growth. While the population in these cities has doubled during 19812001, the number of vehicle has gone up by six-and-a-half fold," says the paper. Delhi alone is believed to have more cars than the three other major metros combined.

While increasing personalised transport is a critical worry, it isn't the only one. Goods haulage comes a close second in Indian cities. In Mumbai, for example, many of the hundreds of trucks that come in and out of the city every day carry goods imported destinations elsehwere in the state  as well as the rest of the country. In a country like India  and other large countries like Russia, the US and Canada  rail should be the preferred mode of transport, specially for hauling goods, as the most energy-efficient system. The government is doing precisely the opposite by encouraging long-distance goods transport by road. Thousands of crores of rupees are currently being spent on the Golden Quadrilateral, linking the metros by multi-lane concrete highways, which scheme the UPA government inherited from the previous ruling alliance.

While multilateral agencies like the ADB and the World Bank have been pointing to the alarming rise in motorization in this country, the very same agencies have also been funding major road projects. This is something of a contradiction. In the meantime, the central and state governments appear to be indifferent to the threat from rampant motorisation. State governments going in unthinkingly for fly-overs, coastal bridges and other expensive road schemes which only benefit a minority in every city, even while contributing a bulk of the air pollution.

URL for this article
http://indiatogether.org/greyskies-environment