WATER HARVESTING
Going home with more than theerth
The devotees of historical Veera Narayana Temple at Gadag now have an important lesson to take home along with their theerth and prasad. That if they harvest rainwater falling on their land into the mother earth's womb, they won't have to suffer in the summer. Shree Padre reports.
11 April 2007 -

The Veera Narayana temple of Gadag, Karnataka is well known to lakhs of people. Kumara Vyasa, it is told, wrote the great epic Mahabharatha in poetry form, sitting inside this temple. The temple is located in the town of Gadag, which is also the headquarters of Gadag district. 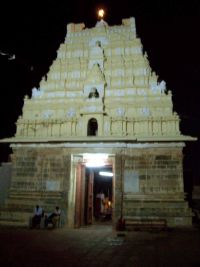 The historical temple is making history again. From many years, water in the open well of this temple was saline. So much so that, if copper vessels were washed with this water, they would turn black. Not surprisingly, water was being pumped from a bore well for all the uses at the temple. In earlier years, there used to be some water in the well, but nobody was using it for any purpose. Due to declining water table, it turned almost empty since the last 12 years. By the end of summer, it used to dry completely.

In the meantime, the first bore well was dug here about a decade ago. Within years, it dried up. Then they had to go for another. This way, the temple dug four bore-wells in a decade! Only one has water now. This water is used as naivedya, theerth and for cooking purposes now.

Fortunately however, there was no move to fill the well up. Thanks to rain water harvesting, the same open well has started serving people round the year again. Not only has the quantity, but the quality of water also improved. Though the temple authorities haven't got it tested, for a layman it appears quite potable. Points out Prahlad Acharya, Temple Manager, "Unlike long ago, now dal cooks very fast in this water."

Gadag district rarely gets its annual average rainfall of 750 mms. There is severe water scarcity in many parts of the district. This success should be an eye-opener to the drought-hit villagers who are ignorant about rainwater harvesting.

•  Wells for the well-being
•  Surangas to tap groundwater

It was in 2005 summer that under the 'food for work' scheme of the District Panchayat a big percolation pit was dug near the open well. The horticulture department also offered guidance for the work. The pit was ready before that year's monsoon began.

The pit is 12 feet long, eight feet wide and has a depth of six feet. Except for two feet, the entire well is filled with filter media like blue metal. For readers who are wondering, blue metal is called 'jally' in local parlance, and is also used while tarring the road. Generally, two sizes of jally are used, one larger than the other. In percolation pits, lowest layer is of bigger jally; middle layer is of smaller jally. The topmost layer is of sand. It is sand that actually filters the run-off. The bottom layers of jally gives lot of air-space for the water for faster percolation into the sub-soil.

The temple premises cover an area of 9,000 square feet. Two years ago, the whole area was covered by stones. Till then, all the rainwater that had fallen on the ground used to run away. After laying of stones, the water started to escape from the main entry. Once the percolation pit was ready, arrangements were done to divert all the run-off towards the pit. Now, not even a little rainwater runs off. 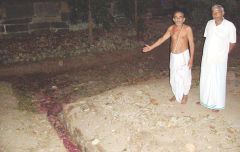 Veera Narayana temple's percolation pit (the depression) filled with filtering layers, with a channel connecting to it through which the rainwater flows in. Pic: Shree Padre.

After the monsoon of 2005, the well got recharged, and water level in the well stopped receding as used to happen earlier. At the end of the summer there was six feet water in it. Surprisingly for the temple authorities, this water doesn't have any traces of salinity or other unpleasant taste now.

The inmates have now started using the water from the well for cooking, abhishek etc. "Starting from this year, we have been using it liberally. Now we are convinced that it won't dry up by summer end," confides Prahlad Acharya. To spread the awareness, they have displayed a board indicating that rainwater is being harvested here.

But, somehow, the well-water is still not considered to be used as theerth! "Instead of the bore well water why can't the well water be used as theerth?" Acharya's body language reflects helplessness. "It is a matter for the archaks to decide," he says. Bore well water is delivered inside the temple with a press of a button. Well water doesn't have this facility now. One has to go there, pull water up with the help of a rope and bring all the way to sanctum sanctorum.

In this part of Gadag, still there are quite a few private open wells. Around the temple itself, there are 12. Three to four were filled up by their owners. Except Sridhar Acharya's well, all others had only saline water. The Archaks of the temple used to bring water from this well for their personal use and at times for the preparation of naivedya too. Interestingly, now four wells out of the 12 have sweet water. Water table also has risen.

Just a few metres away from the open well of the Veera Narayana temple is the Narasimhatheertha tank. It is said that Kumara Vyasa used to bathe in the Narasimhatheertha tank and write the poetry draped in the wet clothes, till they dried. The pillar near which he carried out his writing is named as 'poet Kumara Vyasa pillar'. That historical tank also used to dry in the recent years. But now it looks bountiful with 10 feet of water.

In many temples, as part of development programmes, granite stones are laid all over the floor. The story has not been too different from what happened at the Veeranarayana temple. The rainwater used to percolate in the premises earlier and was wasted as runoff. Result: The temples' open wells that have served for decades went dry. Subsequently bore wells were dug and the deities are bathed with bore well water. 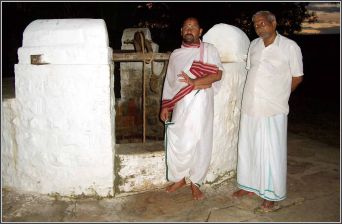 Prahlad Acharya and one of the temple archaks near the 'reborn' well. Pic: Shree Padre.

Instead if simple arrangements are done to ensure that the rainwater of the premises gets percolated there itself, the well would continue giving water. A few percolation pits would take care of this. If space is a problem, one need not go for very large percolation pits like that of the Gadag temple. Deeper pits with lesser length and breadth will also serve the purpose.

It is also not enough to the allow water to run-off directly into the wells. The Trikooteshwara temple in Gadag has a larger open area than the Veera Narayana temple. Long back, all the run-off of this premises was made to reach the nearby two wells. As expected, those wells haven't gone dry. But the water here is not clean, it is greenish. Rainwater run-off from the floor should not be allowed to go to the well directly. It has to be filtered with a thick layer of soil. Percolation pits dug at carefully selected points do the job silently and neatly.

The devotees of historical Veera Narayana Temple at Gadag now have an important lesson to take home along with their theerth and prasad. That if they put all the rainwater that is falling on their house-site into the mother earth's womb, they won't have to suffer in summer.

URL for this article
http://indiatogether.org/gadag-environment