FIRE SAFETY
Setting the stage on fire
A recent fire at one of Kolkata's major film studios puts the spotlight on the poor condition of these establishments, and the risks faced by the film industry in many buildings. Shoma Chatterji reports.
08 August 2011 -

On 18 July, a terrible fire engulfed two of the four stories of Bharat Lakshmi Studio in Kolkata's Tollygunge neighbourhood, well known as the home of many Bengali studios. The constructed, temporary sets of seven to eight mega-serials have been reduced to ashes, bringing shooting to a halt. Loss incurred in terms of money probably runs into a crore and more for the studio owners Navin and Jyoti Chokhani and easily into several lakhs for the different producers of the various serials being shot on the studio.s floors.

The fire broke out at the warehouse, and spread out to burn down three hutments in the adjacent bastee, and then spread further to adjoining shanties whose residents were evacuated immediately. Sixteen to nineteen fire tenders battled to control the blaze for more than two hours. Fire Services Minister Javed Ahmed Khan said that those injured while helping in controlling the blaze were sent for treatment. "Three shanties in the adjacent Hoglapada bastee were consumed in the fire. People from there helped the firefighters in dousing the flames," the minister added.

Four of the seven shooting floors were gutted completely. Artifacts of old films shot in the studio floors are believed to have been completely destroyed in the flames.

Primary investigations by the workers of the fire department reveal that the fire began an hour before the day's shoot was to begin, and was probably caused by a short circuit in the power supply connected to the warehouse. The fire fanned out dangerously because the warehouse was filled with highly inflammable material like loads of files, old newspapers, floor mats made of rubber, wooden goods and synthetic material.

The temporary set structures were made of mesonite and plywood, while polythene sheets stretched as protection from rain leading to tremendous heat building up, that made the fire spread so quickly. The thick iron beam that was the roof collapsed in the fire. Jyoti Chokhani, one of the two owners said, "We have 50 fire extinguishers and all of them were active. The second floor, from which the fire is thought to have originated, was closed from the outside. The fire was noticed at least 30 minutes after it broke out."

The fire department, however, does not agree. A state fire and emergency department official insisted that the studio lacked adequate fire-prevention measures. A complaint against the studio owners would be lodged, informed the official.

Uniform problems, at all studios

The government's plans to revive this studio have progressed in fits and starts. First, it was decided to bring in private partners to jointly begin a programme of restoration and repair of the studio. Private organisations were invited in July last year to send in their applications, but only one responded. The State Government signed a contract with this organisation on October 16. According to the terms of the deal, the organisation would pay the government Rs.4 crores over ten years, in exchange for a 99-year lease on the studio.

This never took off. Even before the deal was signed, the cine technicians unions and actors' unions raised a hue and cry about the part-privatization of the studio, forcing the State Government to rescind its decision. The government then dropped the studio in the lap of the Kolkata Metropolitan Development Authority. The KMDA sent a proposal to the Kolkata Municipal Corporation on 9 November 2010 for modernization and improvement of Technicians Studio Number One that included various packages including fire-prevention and fire-fighting equipment. But here too nothing has moved.

Why? Bibek Bharadwaj, CEO of KMDA says there is no money to fund this programme (it was budgeted at 12.6 crores), and the file remains in cold storage. Following the change in the state government machinery after the elections, KMDA has sent a fresh proposal to the KMC. But the studio still remains in its precarious condition, with the continuing risk of another fire even worse than the last one.

Technicians Number Two, also owned by the State Government stands in a lane which fire engines will not be able to access if there is a big fire. "We have proposed the opening up of a big gate at the rear of the studio premises. The proposal contains features like installation of new fire extinguishers and other related equipment, restoration of old sets, two modernized toilets and the greening of the complex. The budget for this one is 4.13 crores," says KMDA chief engineer Arup Ghosh, adding, "we were horrified when we went to Technician Studio Number Two for a survey to discover the threat posed by the staircase." 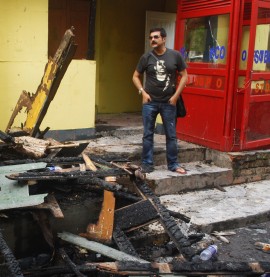 The risk of fire is also made much higher by the fact that there is still very high demand for studio spaces in the city. (Above: The debris after the fire).

Filmmaker Haranath Chakraborty places the responsibility for the precarious condition of the studio on CPM government. "The former CM did not evince any interest whatsoever in the maintenance, running and modernization of the studios," he said. Mamata Banerjee, taking over the helm of government, had sent a team under the leadership of Nandini Chakrabarty of the State of Information and Culture on 20 June to survey the conditions of this studio.

The team discovered the utter state of decay the studio floors were in. Loose electric wires hung out like spiders' webs over the dusty walls. The floors were dumped with wooden frames, plywood waste, glue, thermocole and matting . highly inflammable objects jostling against each other ready to explode with the accidental strike of a match or the switching of a plug. The three floors in this studio, spread over a spacious compound, have only two fire extinguishers each.

The government claims that it has taken adequate precautions by creating a water supply line around the studio complex for use in case of a fire. But the studio workers are convinced that the limited water supply will not be sufficient to stop the fire even as primary support systems until the fire engines arrive.

The same fear of fire haunts the other film studios in the city. A man-made disaster can break out any moment especially where scenes of fire are being shot in an ambience where real fire can turn killer without warning. Fire alarm systems are conspicuous by their absence. Indrapuri Studio, right in front of the Tollygunge Tram Depot, is privately owned. It has four shooting floors and each one of them is filled with inflammable matter for use in shootings. Each floor has only two extinguishers. There are only eight fire extinguishers in all. Studio workers believe this is totally inadequate, and that the entire structure will burn up like straw, in the case of a fire.

A fire officer who chose to remain anonymous said, "The fire department has made it mandatory for Durga Pooja organizers to first soak all inflammable material in a fire-prevention chemical liquid and then begin construction. It is urgent that this mandatory rule be extended to cover all film studios in the state. Every shooting floor should have a good amount of fire fighting equipment in addition to sand and foam. Not one studio in Tollygunge has these provisions."

Meanwhile, there is great demand for studio space. Arijit Dutta, owner and manager of Priya Cinema, says, "The Bharat Lakshmi Studio fire adds to the scarcity of studios for film and television shootings in the industry. The demand for shooting floors has increased while the supply is threatened by such disasters. Bharat Lakshmi is one of the few functioning non-government-owned studios for the film industry in West Bengal. The studio had three or four shooting floors but the demand is so high that actual shooting takes place on seven floors."

"Indrapuri Studio has four floors while New Theatres has two big floors. Another studio, Calcutta Movietone that was closed for many years, began functioning recently with two floors. A closed factory near Regent Park has been converted into a studio. But that hardly meets the demand," he adds.

The Information and Culture department says that a portion of Radha Studio - where Kolkata Doordarshan used to shoot its serials - has been restored, modernised and made almost ready for use. A proposal to build a five-storey building in the complex of Technician Studio Number One is currently under consideration by the department. Work will begin once the funds are allotted by the finance department.

The studios have never bothered with accident or fire insurance. There are no preventive provisions ready to be put in action if and when the need arises. Fire prevention and fire fighting strategies are conspicuous by their absence. While producers keep investing in production values by taking their teams for location shoots to Switzerland, Italy, UK and USA, no one seems to bother about the precarious conditions of the studios back home.

"For actors and technicians, these studio floors are like temples where our gods reside. When such temples are razed to the ground through sheer negligence, it hurts us deeply," said top actor Prosenjeet who arrived at the complex soon after he heard of it from his colleagues in the industry. The North Kolkata streets set constructed for Buddhadeb Dasgupta's film Kaalpurush starring Mithun Chakraborty and Rahul Bose stills stands on one corner of the Bharat Lakshmi Studio.

"It is heartening to find money flowing into the Bengali film industry over the past six or seven years. But absolutely no attention has been paid to the terrible conditions in which we do interior shooting in the studio floors. We, the people in the industry, are not behaving in a responsible manner to avoid such incidents. As producer, I see that all my serials are fully insured against any accident or calamity taking place during the shooting. But few other producers are following this precept," says Prosenjit.

"The studio owners simply do not care about improving the work environment by providing even the minimum like a fire alarm. We, the producers, directors, actors and technicians had once decided to boycott some of the major studios that lacked the basic framework. But we did not stick to our own promise. Whenever a work was commissioned, we forgot all about it and went right back. Disasters like the one that has just happened will happen again unless we are more responsible for the working environment being safe from hazards like fire and heavy rains and collapsing of construction," he added.

Added Mahendra Soni of Shree Venkatesh Pictures the sets of whose mega-soap, Sindoor Khela, were demolished completely, "We have learned the lesson of our life, because we had not insured our serial against disasters."

URL for this article
http://indiatogether.org/fire-government