For seven-year-old Sandhya and her siblings, totally dependant on their mother who ekes out a living by making beedis, the state government's relief package, announced nearly 18 months ago, is simply not enough. Many more suffer the same fate. P N Venugopal reports.

Seven-year old Sandhya had the first glimpse of the world around her in the first week of 2008. Born blind due to the deadly fallout of the hazardous pesticide endosulfan, this innocent girl belonging to Swarga village of Kasargod district in Kerala had her vision restored after two surgeries and prolonged treatment. This was the initiative of the teachers of her school and under the auspices of the Endosulfan Victims Relief & Remediation Cell of the Kasargod District Panchayat. Sandhya's paternal uncle had died of the ill effects of endosulfan and her two siblings too are the victims of. 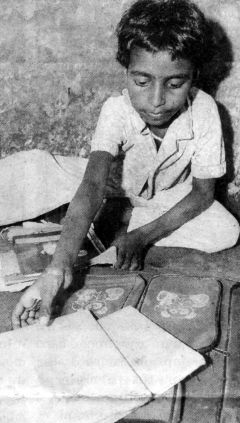 Sandhya is just one of the many in Kasargod district who are the living victims of the aerial spraying of endosulfan in the cashew plantations of Plantation Corporation of Kerala (PCK) for over two decades, till 2001. Endosulfan is recognised as being unacceptably hazardous to human health and the environment. It has left a legacy of deformity and malfunctions in various communities world over. Its use is banned not only in many European countries, but even in India's neigbouring Pakistan and Sri Lanka. However, it took hundreds of deaths, dedicated effort of environmental/public health activists and two decades to force the Kerala government to stop the use of endosulfan.

But it was only in August 2006 that the Kerala Government owned up its responsibility and disbursed Rs.50,000 each to the kin of 135 victims who had died. The Chief Minister V S Achutanandan also announced a relief package of Rs.50 lakhs to take care of the treatment of the affected and their rehabilitation. "We are now preparing a list of those who died after June 2006," says M V Balakrishnan Master, District Panchayat President, Kasargod. And there have been many deaths too. Eight-year old Jumaila, of Chengala died in July, Mani (65), a resident of Ukkinadukawho in September, Lakkanna Rai, 55, of Velloor Sabrakaje died in a Mangalore hospital in December, Sangamulya, 70, died in January this year.

Opinion about the relief is divided. Some feel that not enough is being done for the endosulfan-impaired living and the easier way of compensating the dead is being adopted. "By all means, list out all those who have died," says Dr Y S Mohankumar of Padre, who was one of the first to trace the deaths due to mysterious ailments in the district to the spraying of endosulfan. "But please don't wait till they die. Treat the living."

But that is exactly what we are doing counters, Balakrishnan Master. He reels out numbers. "Out of the Rs.50 lakhs allotted by the government we have earmarked Rs 37.5 lakhs for treatment. In a medical camp, 153 victims who had ailments of ear, nose and throat were treated. 162 were treated in another medical camp for the vision impaired. 103 victims who lost vision fully or partially have been treated. Certain serious patients have been treated in hospitals outside the state. Several surgeries have been done."

Master adds that in the case of victims who were immobile, doctors visited them at their residence and charted out their course of treatment. Rs.12.5 lakhs is kept aside for implements such as hearing aids and although not distributed as yet, it is reported that orders have been placed.

Sudheerkumar, the convener of the Anti-Endosulfan Committee more or less agrees with the contentions of the district panchayat president. "They have done quite a bit of work. Many of the victims do get treatment." But he points out that in such a massive tragedy treatment alone is not enough. Rehabilitation and nursing care has not been given equal priority. Many of the affected families have been deprived of their breadwinner either by death or by deserting. Paid home-nurses could help take care of such children while the mothers can go for work and eke out a living.

Sandhya and her siblings are totally dependant on their mother who ekes out a living by making beedis. Their father had left them after the three were born with physical disorders. Then there is four-year- old Anjana of Periya village, who was born with her urinary bladder outside her body. Her mother has to be with her all the time and also make a living. Is it not the duty of the state, which has owned up the responsibility, to provide assistance to the mother at least by providing nursing care, asks Sudheer Kumar. "In fact, the state should adopt such children."

Dr Mohan Kumar too points out the lack of schemes for rehabilitation. He cites the example of the two visually-challenged sons of Easwar of Padre village. No treatment or surgery can ever give them sight. The two kids should get necessary support for learning Braille, Mohankumar says. Providing means of livelihoods to those who can work has also not been taken up. The PCK should be asked to register all those who are suffering and facilities provided for organic farming in side the plantations argues Sudheer Kumar. But the residues of the dreaded chemical has to be removed beforehand and no such moves are in the offing.

Another disturbing factor is that only Rs.50 lakhs had been allocated in the last year's state budget for the relief measures. Several cases filed by individuals seeking compensation are currently pending in courts. One was disposed off last year, where the judiciary merely asked the government to hasten the disbursal of the allocated amount and did not go into the merits of the claim or the quantum of compensation.

The district panchayat had earmarked another Rs.10 lakhs from its funds. The money is almost over. And there are about 2000 victims registered till date. Balakrishnan as well as M Madhavan Nambiar, the coordinator of the relief cell was extremely cautious when they mentioned the preparation of a second list of those who have died. "We've not made any commitment that the relatives of those in the list will be provided with compensation," they say. Money is the crunch. The district panchayat is working on a website which will contain the details of the gruesome tragedy and will make appeals to the global community for assistance.

But do the victims have to depend on charity? Are not the perpetrators out in the open? "But so far we do not have concrete and scientific evidence that will stand in a court of law which will squarely implicate the PCK and the producers of endosulfan," says Balakrishnan Master. "We have to prove that they are the culprits." But Dr.Sreepadi Khajampadi another early activist, disagrees. "It's for the accused to prove that they are not guilty, " he says.

The activists seem to have more or less withdrawn from the scene and the local politicians appear to have taken over. There are allegations that politics is playing its own role in deciding whether one is a endosulfan victim or not. There are also cynical comments about attributing almost every other death to endosulfan. But those who allege this are unwilling to be quoted as even they think that if some one is going to be benefited - after all, they are all so poor - they shouldn't be deprived of the compensation. (The Quest Features & Footage, Kochi)

P N Venugopal is an independent journalist with The Quest Features & Footage, Kochi.

URL for this article
http://indiatogether.org/endosulf-relief