EMPLOYMENT GUARANTEE
Wages of meddling
By and large, poorer and badly-run states like Bihar and Orissa have seen higher inflation resulting from the NREGA windfall, while in the better-off states with less money flowing in through the scheme, inflation is much lower. Clearly, meddling in markets will show up in ways that are not necessarily all good, writes Sunil Jain.
13 March 2007 -

When the National Rural Employment Guarantee Act (NREGA) was first mooted in 2004, it was pointed out that once fully rolled out, the scheme would cost Rs 150,000 crore a year against the estimate of Rs 40,000 crore. The Rs 40,000 crore estimate was based on the assumption that just the poor would opt for the scheme, which would involve hard labour, but this column argued that even the non-poor would opt for the scheme since it promised the minimum wage, which is something they never got for most months of the year in their current jobs. In other words, wages would rise with the NREGA and this would then have repercussions in other areas - wages rising is obviously a good thing, but if it makes agriculture that much more unviable, it may not be as good.

Clearly the state-level barriers to free movements of goods are another factor behind the current price spiral.

So far, the finance minister has ensured the NREGA's cost is way below what has been estimated, but that is primarily because the scheme has not been rolled out across the country and, more important, it is not being offered to everyone in the manner promised. If it was, there is no way the finance minister could have increased the NREGA allocation by just Rs 700 crore (from Rs 11,300 crore in 2006-07 to Rs 12,000 crore in 2007-08) while increasing the coverage of the scheme from 200 districts to 330 districts. Only one of two outcomes is possible. Either the scheme will not be offered to everyone who wants to opt for it, or the money spent will dramatically outstrip the allocation.

The second fear - that of the NREGA causing wage levels to rise across the country - also looks like coming true. Though there are no data on wages available for each state, the all-India numbers show the wage growth for farm labour has been faster than inflation, at least in the last one year for which I've looked at the numbers. In other words, it may not be incorrect to impute what's happening to wage levels by looking at inflation numbers since that is something that is available at the level of individual states.

A study by the India Development Foundation (IDF) analyses precisely this at the level of states. States like Orissa and Madhya Pradesh, which are large recipients of NREGA funds, have seen the highest levels of inflation (CPI for agricultural labour) in the country. By and large, poorer and badly-run states like Bihar and Orissa have seen higher inflation resulting from the NREGA windfall than the better-run states have. By contrast, in states like Punjab, where hardly any NREGA funds have either been sought or disbursed, inflation levels are a lot lower.

In the south, the claims on NREGA funds have generally been smaller, and inflation levels there have also been lower. Kerala, for instance, got just Rs 2,180 crore of NREGA disbursements and prices rose by just 3.1 per cent in the first eight months of this year. Andhra Pradesh, however, had a higher inflow of NREGA funds and consequently saw the highest inflation in the south. 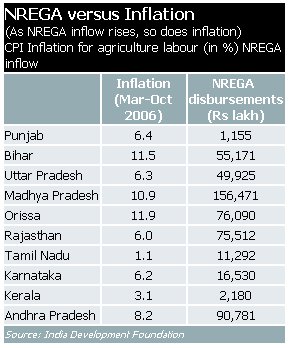 The other point on the subject made by IDF chief Shubhashis Gangopadhyay (at a Budget discussion along with the NIPFP, NCAER and ICRIER last week) is what the inflation numbers say about the level of integration of India's markets. Take a look at the south Indian states of Karnataka, Kerala, Tamilnadu and Andhra Pradesh, and see the inflation levels in each of them . It is true, as the IDF argues, this has a lot to do with the increased NREGA spending, but surely states that are neighbours shouldn't have such high inflation differentials? After all, if prices are rising in one state, goods from a neighbouring state should make their way there automatically. Clearly the state-level barriers to free movements of goods are another factor behind the current price spiral.

It is true the study is preliminary and on the basis of data for just eight months, and there could be factors other than just the NREGA that are at play, but there are enough indicators to conclude that the results of meddling in markets will show up in ways that are not necessarily all good. Given how the UPA government wants to eliminate the market for everything, and mandate things like the levels of price and profits for corporate India (the FM in his Budget speech even told us a price of Rs 190 for a 50-kg bag of cement was "remunerative"!), and even the caste and the religion of the people it hires, that's a valuable lesson to keep in mind.

URL for this article
http://indiatogether.org/egameddle-poverty