STATE VERDICTS 2013
Bad Economics, bad politics
The real reason behind the Congress' performance in the recently concluded Assembly Elections may not be the rise of the Aam Aadmi Party per se, but more the economic concerns of the real aam aadmi. Devinder Sharma analyses.
25 December 2013 -

Sonia Gandhi thinks that failure to stymie corruption and check rising inflation cost the Congress party dearly in the recently held state elections. Again, according to some media analysts, it was the dominant Narendra Modi factor that resulted in a 4-0 tally for the BJP and also catapulted stock markets to an upward rally. Markets are known to love strong and powerful leadership. 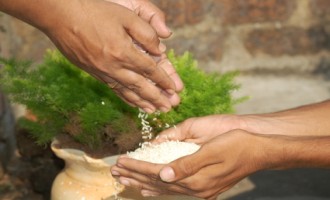 But there is more to the 2013 elections than what is being seen on the surface. A deeper look at the dramatic turnaround by the Aam Aadmi Party (AAP) in Delhi, and at the same time the rout of the Congress in Rajasthan, Madhya Pradesh and to some extent in Chhatisgarh will show that the verdict was not only against corruption and inflation, but rather brought about by the overall flawed economic policies that the UPA has been aggressively pursuing for nearly a decade now. Big ticket corruption and inflation were merely manifestations of the growing inequality and economic injustice that people were fed up with.

After the 2009 Lok Sabha election results poured in, media pundits talked of the maturity of Indian voters. They ascribed the return to power of the UPA to the widespread appreciation that people have for market-friendly economic policies. Soon after UPA-II was back in the saddle, it shifted its focus to a GDP-centric growth model. Instead of focusing on human, social and natural capital, the ruling party showed a single-minded emphasis on financial capital and ruthlessly pushed for more market reforms, which in simple words meant more privatization.

This resulted in massive land grabs across the country, and also usurping of natural resources that impacted the livelihoods of millions of people in the rural areas. While rural India witnessed a thousand mutinies every week with a significant proportion of the people being forcibly displaced from their meager land holding, their only economic security, those who sat glued to TV channels mistakenly considered this a small collateral damage in the path towards development and growth.

The 'tyranny' of the markets, as Pope Francis now calls it, actually witnessed food, shelter and education going beyond the means of the aam aadmi. While more and more people were being pushed out of agriculture every passing day, growing unemployment and underemployment pushed the poor to the wall. Rampant mining of resources in Jharkhand, Orissa and Chhatisgarh made life miserable for the locals. Migrating to the cities, these millions were then systematically uprooted as slums were gradually demolished. Pushed out of the villages first, and being driven out of the cities - what would you expect these people to do? They could only exercise their vote to express their anger.

Between 2005-2009, a Planning Commission-sponsored study showed that even when growth was over 8 per cent per annum, more than 140 lakh people were driven out of agriculture and an additional 53 lakh people lost their jobs in the manufacturing sector. In other words, while GDP was on an upswing, unemployment too was rapidly growing.

While media pundits went on repeating ad nauseam that higher growth was necessary for providing more employment and removing poverty, the reality was just the opposite. Between 2005-2009, a Planning Commission-sponsored study showed that even when growth was over 8 per cent per annum, more than 140 lakh people were driven out of agriculture and an additional 53 lakh people had lost their jobs in the manufacturing sector. In other words, while GDP was on an upswing, unemployment too was rapidly growing. Studies have shown that when GDP was 3 per cent, employment in the organized sector grew at 2 per cent. But when GDP grew at 7 per cent and more, employment fell to 1 per cent. Let's be therefore clear. India has been staring at jobless growth.

The thrust on reducing mounting fiscal deficit to 4.8 per cent of the GDP also led to a push for flawed economic initiatives that hurt the aam aadmi most. Again, pushed for by media pundits and corporate economists on TV channels, the emphasis was on doing away with subsidies for the poor. Calling such spending wasteful expenditure, these economists relentlessly campaigned for doing away with subsidies on petrol, diesel, LPG and even on food security. Withdrawal of fuel subsidies had a cascading effect on market prices, which burnt a hole in pockets. This was completely unwarranted, as I had been saying for quite some time. The reason is simple. Instead of taxing the poor, a better option would have been to withdraw the tax concessions of Rs 5.73 lakh crore that were given to corporate India in the 2013-14 financial budget. This alone could have wiped out the fiscal deficit, thereby enabling the poor to escape the bolt of price hike.

In Madhya Pradesh and Chhatisgarh, what made people vote the BJP back into power was simply the systematic launch of social security measures by these governments that benefitted various sections of the society, reducing the killing impact of the market economy. For instance, Chhatisgarh had laid out a very effective and well-maintained food security system that insulated the bottom of the pyramid from food shocks. Chief Minister Raman Singh had ensured that it worked well. In Madhya Pradesh, I must say that Shivraj Singh Chauhan had been alert to the writing on the wall and shifted the focus to agriculture. He provided an additional bonus to farmers, placing more income in their hands, which in turn catapulted the State to emerge second on the agricultural map of India.

There is more to be done if the BJP wants to sustain the momentum. At the same time, let's be very clear. Following the same flawed growth-centric economic model will not take the BJP far. People have voted for BJP for two reasons: one, they didn't have any other alternative (except in Delhi, and there the outcome was evident) and secondly, the anger is against unjust economic policies. If the party fails to read the widespread discontent that prevails, visible more through the anger and frustration against corruption and inflation, the aam aadmi now knows that there is a political alternative on the horizon. The emergence of AAP clearly shows that the vote is for sensible economics that benefits a larger section of the public.

The continuing loot of resources - natural, social and human - in the name of growth must stop. This is the strong underlying message. People are no longer impressed with high GDP figures anymore. They want food for all, health for all and education for all.

URL for this article
http://indiatogether.org/ecopolicy-op-ed