LIVELIHOODS
A drive through hell
It is a common perception that truck drivers are rash individuals, responsible for the deaths of numerous citizens in accidents each year. But few know how much the work conditions of drivers contribute to making them who they are. At an awareness camp for drivers at Chandrapur, Aparna Pallavi finds out more.
24 December 2005 -

"In common perception, a truck driver is a speed-devil and a drunken lout who hits people and runs," says Ramesh Jadhav a trade union activist and president of the Vidarbha Heavy Vehicles/Truck Drivers' Union. "He is also a confirmed sex offender and a dangerous carrier of AIDS in much the same way as a mosquito carries malaria." But very few people know just what the life of a truck driver is really like and how much his work conditions contribute to making him what he is, says Jadhav.

We are at an awareness camp for truck drivers at Chandrapur, Maharashtra, organised by Jadhav in the last week of October. He has been struggling to nurture the fledgling union in the face of stiff, if not violent, opposition from a hostile and powerful nexus of politicians, transport companies and the police.

The first session at the camp is about drivers describing their work conditions. A despondent-looking Dayaram Kusram says he has been a driver for 25 years, but has never had any employment papers to show. "No driver has employment papers. If I meet with an accident tomorrow, the company for which I have worked for five years will simply declare that I had been employed just a week back, and leave my family in the lurch."

"After I met with an accident, suffering several fractures in both legs, the malak (employer) put me in a hospital in Nagpur and disappeared. Other drivers had to raise a contribution to get me treated," recalls Manohar Dange. (Malak is slang used both in Marathi and Hindi by working classes people in Maharashtra.)

Under the Motor Vehicles Employees Act of 1961, a truck driver is entitled to a minimum salary of Rs 5,000, a weekly off and insurance and compensation in case of accidents. He should be working eight hours a day, and in case of long trips over several days, should be given compensatory leave. But in reality in Maharashtra, according to Jadhav, drivers are paid anything between Rs 1500 and Rs 3000, work extremely long hours with as little as single-night breaks between trips that stretch over days.

Under the Motor Vehicles Employees Act of 1961, a truck driver is entitled to a minimum salary of Rs 5,000, a weekly off and insurance and compensation in case of accidents.

"What is worse," says Jadhav, "they are subjected to the worst forms of violence and intimidation by their employers." Says Bhagwandas Kamble, "In the company where I work, the drivers are beaten up at the slightest excuse with iron rods or belts. Someone or the other is beaten every day."

The drivers come from tribal, dalit and other castes, with the first two dominating. A large number of them inherited the profession from their fathers. The educational levels are abysmal, with the older drivers having cleared class 6 or 7, and the younger ones having struggled up to class 10, with a few exceptions who have done class 12. Jadhav started off as a grassroots village activist, and has studied up to the class 12.

For the most part, drivers are appointed casually, with no employment papers or attendance records. Salaries are not just meagre, but also irregular. "Sometimes our salaries are pending for two months at a stretch," says Kondiba Kachore, "If a driver insists on being paid on time, he may be beaten up or fired or both. Employers also deduct arbitrary amounts from our salaries in the name of diesel or spares. I myself had half my salary deducted this very month. 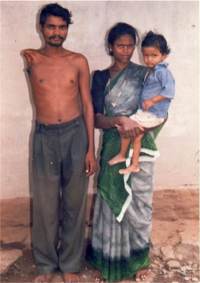 Driver Prakash Kachore with his family. Kachore committed suicide a few months after losing his arm in an accident. He had been given just Rs 2,000 by the company (a registered one). Pic: VHV/TDU.

"Drivers are also frequent and helpless victims of the profiteering tactics of transport companies. Says Duryodhan Badole, secretary of the union and a driver himself, "Most trucking companies in Maharashtra run their vehicles on kerosene instead of diesel. This is not only environmentally disastrous, but poses a grave safety risk for the driver or others. A truck running on kerosene has difficulty climbing slopes, and the danger of one rolling back and causing an accident is very real."

This practice, insist the drivers, is carried out hand-in-glove with the police. "When we are caught with kerosene in our fuel tanks, it is we who are booked, not the malak," says Dhanram Gudalwar, who is one of the many drivers who has been booked and imprisoned on this account. "Even when raids occur, the malaks are tipped off in advance and hide their stocks of kerosene."

Other common offences, that are committed by companies but for which drivers get booked, are overloading and overspeeding.

"It is common practice among transport companies to over-load trucks by as much as twice their legitimate capacity, which again creates dangers of overturning and rolling back on slopes," says Duryodhan, "And every trick in the book, from threats, violence and measly incentives that the impoverished drivers can't resist, are used to make them complete their trips ahead of schedule. Add that to inhumanly long work hours and grossly insufficient rest, and you have the perfect recipe for a road-accident."

When asked to comment on why the provisions of the Motor Vehicles Employees Act had not been implemented in the state, the deputy commissioner of Labour, Nagpur, Ramesh Kulkarni said, "The problem is that the Act applies only to registered companies. The process of registration is concentrated in Mumbai, and so a large number of unregistered companies mushroom everywhere in the state. And since the companies always have the alibi of having 'applied for registration', enforcing implementation of the Act becomes virtually impossible."

"This," says Jadhav, "is blatantly untrue." He admits that it is a fact that there are a large number of bogus transport companies in operation that violate the Act. But according to him, even registered companies underpay, overwork and abuse their drivers. "They run their vehicles on kerosene and their attendance records are as skewed as ever. All this can't go on without the consent of the labour department," he says.

"I work with one of the largest companies in Chandrapur district," says Damodar Ramteke, "On record we work for eight hours a day, but in reality our hours are never less than 16. The company collects Rs 6,000 as salary from the coal mines for which they transport coal, but we are made to sign blank vouchers and paid half that amount or less."

"The labour officers are all 'managed', alleges Devrao Sonkusare. "Hire and fire is rampant even with drivers who do have papers. I was dropped on a charge of theft after I told the labour officer the truth about our working conditions," he says. Ramteke works with SSV Transport company and Sonkusare works with Chaddha Transport. Both are registered bodies.

A major problem that prevents drivers from demanding their rights is the fact that a nexus of employers, police and politicians (several politicians have their own transport companies) have used violence, coercion and intimidation to crush any signs of organisation among them.

"That is the reason why there are no unions of truck drivers in the state (barring, of course, his own precarious body). The owner-driver associations that do exist just use the drivers for the employers' ends," says Jadhav. Owner-driver associations are usually region or city-based, and in Chandrapur there is the Chandrapur Truck/Heavy Vehicle Chalak Malak Sanghatana.

Jadhav and Badole have themselves had to face much persecution in the process of keeping their union alive. In 2001, a few months after the union was constituted, Congress leader and transport company owner Satyanarain Tiwari 'kidnapped' Jadhav and Badole while they were trying to contact truck drivers in some mines. Tiwari had met them in person and threatened to kill them. Immediately afterwards he called the police and levelled charges of collecting extortion money from drivers against both the men. Jadhav and Badole were then taken to the police station, where they were made to sit all day, till their lawyer Purushottam Awari got them out.

"Drivers who associate with the union are sacked, threatened and beaten up," says Badole. "When we started this union, we had 800 members. Now the numbers have dropped to half because of the severe persecution tactics of the employer-police-politician nexus."

Speaking on solutions to the problems being faced by the drivers, Mohan Kothekar, member, National Secretariat, New Trade Union Initiative (NTUI -- a national confederation of independent unions which is carrying out extensive work in the unorganised sector), lists out what seems like a reasonable set of demands. Drivers form a vital part of the crucial transport sector, he says, and the responsibility of safeguarding their rights rests with the government. "The provisions of the existing Act must be extended to apply to every truck purchased by anyone in the country. Purchasing insurance and social security cover for the driver must be made mandatory for truck owners at the time of the purchase of every truck. The government too must contribute a share to this social security fund. Severe action must be taken against lax or corrupt labour officers, and drivers must be provided free health care, insurance and rations in whichever part of the country they happen to be."

Jadhav feels that the lives of thousands of innocent people who are killed in truck accidents every year can be saved if the work conditions of drivers are improved. Voicing a broader appeal, he says, "More than anything else, it is society which must rise to support the cause of truck drivers."

Aparna Pallavi is a journalist based in Nagpur, and writes on development issues. Names of some truck drivers have been changed to protect their identities.

URL for this article
http://indiatogether.org/drivers-economy