Malls trampling Delhi's green belt
Part of the Aravalli range, the Delhi ridge is an icon of greenery and part of the capital's heritage. But over the years, much of the ridge has disappeared, with the most recent threat coming from swanky hotels and malls. A multi-stakeholder board is supposed to protect the ridge, but is fraught with conflicts of interest. Deepa A reports.
19 August 2005 -

On a rain-splayed morning in July, a peacock scans the clouds from its vantage point on a tree while a great barned owl hunts for game amongst the thick, thorny shrubs. The ground beneath their feet is a bright rust, and lines of mica appear like a thin, white waterfall on the boulders rising from the wet earth. The South-Central Ridge in the Vasant Vihar area in South Delhi plays host to many such magical moments, when nature astonishes with its simple beauty. 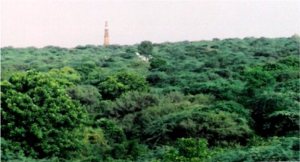 Sanjay Van in the South-Central Ridge. The Qutub Minar can be seen in the background. Pic: Deepa A.

Part of the Aravalli range, the ridge is the only one of its kind in the country's metros, a Delhi icon that is as much a part of the capital's heritage as the imposing façade of Rashtrapati Bhavan or the gracious sandstone arch of India Gate. A swathe of green on higher ground, the ridge soothes the hot winds from the deserts of neighbouring Rajasthan before they reach the city and stashes away welcome raindrops to boost dipping groundwater levels. Some of the ridge's bounty was actually manmade  in the fourteenth century, emperor Feroze Tughlaq encouraged the planting of trees here so that he could go hunting in these 'artificial' forests.

But over the years, much of the ridge has disappeared under the brick and mortar that now define most Indian cities. Today, it has been reduced to four zones: South-Central, Central, North and South. The Central Ridge extends from the Dhaula Kuan area, the Southern Ridge in the Asola sanctuary bordering Haryana, and the Northern Ridge spreads across the Civil Lines and Delhi University campus area in North Delhi. Even these pockets are under assault: debris is dumped in many parts and illegal constructions are commonplace. A worst-case scenario is already on display in the South-Central Ridge, where swanky hotels and malls are slowly but surely replacing trees.

Beginning with the North and Central Ridge, there have been encroachments by large government institutions such as the army, broadcasting stations and large schools, says Dunu Roy of Hazards Centre, a NGO that works in the area of urban issues such as planning, slum demolitions and pollution. Even 10 years ago, a report by an environmental group pointed to as many as 16 encroachments in the ridge. Last July, the Delhi High Court had to step in to direct the Delhi Development Authority (DDA) to maintain the protected status of the Central Ridge. The court direction came after a cemented path and cremation sheds were found to have been constructed in the ridge area in West Delhi. Much debris was also being dumped there.


The RMB meets in the Delhi Chief Secretary's office. There are at least four to five meetings every year.

The Ridge Management Board, a seven-member non-statutory body consisting of representatives from the government, DDA and non-government organisations, supposed to protect the ridge, has been unable to prevent the construction frenzy. The board, headed by the Chief Secretary of Delhi, has been under "tremendous pressure to deal with land issues", says environmentalist Ravi Agarwal, director of NGO Toxics Link and a member of the board. Most of the violations have been carried out by government bodies such as the DDA  whose vice-chairperson, incidentally, is also a member of the board  making it even more difficult for the board to take action. "Theoretically, we have all the powers, and the board is effective to a point. But how do you punish a body such as the DDA?" says Agarwal.

Clearly, a powerful commercial lobby has been able to get authorities to bend rules in favour of development. For instance, the proximity of the South-Central Ridge to the Delhi airport has made it doubly attractive for this lobby, which Roy says, is planning to create a large commercial complex for multinational corporations and invite foreign investment.

It's a hapless turn of fate for an area that's been declared as indispensable by expert panels and environmentalists. The South-Central Ridge, spread over 626 hectares, has thus far functioned as a catchment area. A report prepared by the Central Groundwater Authority report last year noted, Development activities in the areas extending from Mehrauli to Masudpur and north to Vasant Vihar may adversely affect the groundwater regime. Referring to the acute water problem in these parts, where residents are increasingly becoming dependent on tankers for water supply at all times of the year, a report of the Central Empowered Committee of the Supreme Court on the South-Central Ridge last year concurred, "This portion of the ridge, which has been identified as an area critical for recharging groundwater, should be strictly protected and declared as a no-construction zone and reserved forest." The CEC presents recommendations on a number of forest conservation matters before the apex court; it had studied this issue based on an application filed before it regarding the protection of environment in the Mehrauli-Vasant Vihar area.

Since 1995, when the DDA wanted to build a road through the ridge to link Vasant Vihar and Vasant Kunj, attempts to usurp the land haven't stopped, says Vikram Soni of the Citizens for Preservation of Quarries and Lake Wilderness, which has been working for the protection of the ridge. That attempt was stopped because of the collective efforts of residents. However, the reprieve was short-lived. In 1996 came a proposal to build an international hotel complex of 13 luxury hotels in the ecologically sensitive region. It took a Supreme Court order to quash the plan, but a five-star hotel and a petrol pump have managed to come up here since then.

But an apex court order in 1997, meanwhile, allowed 92 hectares of the area to be used for development subject to environmental clearances. The DDA has taken development to mean malls, and construction for many, by clearing the ground, has already started. Huge signboards here already announce that the malls are going to come up and trucks and workers are seen in the cleared ground. All this, despite the fact that the Citizens for Preservation of Quarries and Lake Wilderness has challenged the building of malls in the apex court. The uncertainty that accompanies litigation is not deterring developers.

Through it all, the DDA has been steadfastly insisting that the area where the malls are coming up cannot be considered a part of the ridge at all  though its own Draft Masterplan for Delhi-2021 alludes to the drastic reduction in groundwater potential in these parts. Even the fact that the Geological Survey of India has certified the area as part of the ridge hasn't deterred the DDA from proclaiming its stand, which seems to favour commercialisation. While the ridge zones are notified forest areas (a notification declaring an area as a forest is issued by the central government in conjunction with the state government), parts of what has been traditionally considered as the ridge  such as the area in Vasant Kunj  have been excluded from its ambit.

According to Agarwal, this exclusion was because the Loveraj Committee, set up in 1993 to study the arrangement to manage the ridge, relied on DDA maps while deciding on the ridge's boundaries. "As a result, many forest areas were left out in its report," he says. Strengthened by DDA's complicity, builders have been having a field day in the ridge zone in the Vasant Kunj area.

Environmentalists and urban planners warn that the mall project signals a potentially disastrous situation. Whether this area is a forest or not, it fulfills an important ecological function, says Roy. As a highland, it's a drainage area, but if it's cleared of trees, water will not remain for long. Add to that the fact that any commercial complex that comes up in the area will be consuming vast amounts of water. Soni alleges that after the five-star hotel came up, the small lakes inside the ridge  formed by quarries that used to exist here at one time  have all dried up. In the monsoons, it used to be full of water, but it's difficult to see that now, says the activist, who has been visiting all parts of the South-Central Ridge for over a decade.

Roy says that water consumption patterns in the city, as disclosed by Delhi Jal Board figures, clearly indicate that hotels and posh colonies are the worst culprits. The consumption is 220 litres per person per day in houses such as Chankyapuri and Defence Colony, he says of the two upmarket areas. A mall or a five-star hotel would be using 1,000 litres per person.

Some of the promoters of malls, meanwhile, claim that they are getting environmental clearances in keeping with the 1997 court order. We have applied for all the necessary permission, insists Ravi Kachru, executive director, DLF construction division, which is building a mall in the area. We have only conducted excavations so far, and that doesn't violate any rules.

Another surprising offender in the area has been the Army, which has been constructing residential quarters on the 330 hectares it owns in the South-Central Ridge (the rest of the land is under the DDA). While the Central Empowered Committee felt that the Army required to use the ridge for improving their strategic requirements and objectives, environmentalists feel that such concessions come at far too high a cost.

The slum settlements on the ridge have also been a source of contention, though the DDA's alacrity in removing slum dwellers has raised eyebrows. Small groups of labourers had settled down in some parts years ago, when the ridge was a source of construction material. They worked in the quarries, but after these were shut down, they started working in the homes nearby, says Roy. While they use much less water and space than their counterparts with higher incomes, they have become easy targets, he adds. Slum dwellers in the area in fact narrate a tale of how their houses were razed to the ground without so much as a perfunctory notice. Prakash Kumar, programme coordinator of an NGO called Balvihar Dhara that works with communities in slums, says the government exhibits a clear anti-poor bias. The fact that few, if any, twitters are reserved for the high-class housing colonies that have come up over the years on the ridge seems to second his opinion.

The DDA's only contribution to protecting the South-Central Ridge has been to plant saplings in a corner the authority has designated as a biodiversity park. Says Savita Bhandari, Director (landscape), DDA, We see the biodiversity park as an ecological corridor. We are also looking at rainwater harvesting in the area.

For those troubled by the city's changing priorities and skyline, there might be a small consolation yet. Says Dewan Singh, who has organised a demonstration against the mall project as part of his campaign for the ridge's protection, I am now hoping to rope in students and take them around the ridge, so that the future generation understands its importance. More such initiatives may help in giving the city's gasping green lung some breathing space.

Deepa A is a journalist based in New Delhi.

URL for this article
http://indiatogether.org/delridge-environment