TRIBAL WELFARE
All good, but only on paper
An apparently well-intended plan to help very poor tribes in Madhya Pradesh find sustainable livelihoods bears no relation to the reality of how it is actually implemented. Money is simply distributed and disappears, but things remain unchanged. Susmita Guru reports.
05 July 2015 -

Any welfare program is only as good as its implementation. I was acutely reminded of this during my travels to document how well the Conservation-cum-Development (CCD) program has been implemented. The CCD was initiated for the benefit of the Saharias, a particularly deprived subgroup of what the government calls Particularly Vulnerable Tribal Groups in the country.

Saharia constitute about 3.4 per cent of the total tribal population in Madhya Pradesh, and mostly live in nine districts: Morena, Shivpuri, Sheopur, Datia, Bhind, Gwalior, Vidisha, Guna, and Ashok Nagar (TRTI, Baseline Report, 2005). The community was included in the government's list of Primitive Tribal Groups (PTGs) during the fifth five-year plan (1974-79). Facing tremendous survival challenges, Saharias are counted among the 75 identified as Particularly Vulnerable Tribal Groups (PTGs) scattered in 14 states in India and in 4 union territories.

A state government program funded under a central scheme, known as the CCD Plan, seeks to bridge the socioeconomic differences among the tribes. The Saharia Development Agency (SDA) has been responsible since 1978-79 for implementing the CCD program. Though there are many elements to the program, my research focused on the livelihood program in the Shivpuri district. Consisting of two components, skill enhancement and cash support for small-scale business, the livelihood program is a strong need of the Saharia community, whose traditional occupations such as hunting and food gathering from the forest have been lost due to the new forest regulations and laws. 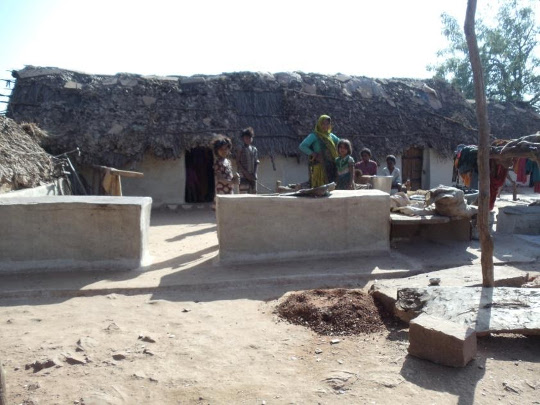 The vulnerability of the community was reflected in the Census 2001 data. The literacy rate among the Saharias stood at 28.7 per cent, much lower even than the Scheduled Tribe (STs) figure of 42.2 per cent in the state. Among Saharia, farmers made up 28.2 per cent, less than for STs in the state, which figure was 46.8 per cent. And 56.9 per cent of Saharias were daily wage workers; whereas the all-state STs figure in 2001 was 42.1 percent. With such poor indices, there was a clear need for the CCD program.

An important focus of CCD is sustainable livelihoods; this includes awareness generation for confidence building, training for skill development, and support to establish people in small-scale businesses so that they can access new opportunities for income generation and employment. A fund of Rs 315 lakhs was appropriated during the 11th five-year plan period for the creation of sustainable livelihood opportunities for the community in the state. Of the total sanctioned amount, 76.3 percent was utilized during the plan period on livelihood creation for Saharias, and one-third of this was in Shivpuri. To see if the allocations were being put to correct use and reaching the intended beneficiaries, I visited two villages in Shivpuri - Baglon and Udayapura.

In the name of poor tribes

Baglon is 25 km from Poohari, in Shivpuri. Of the many activities carried out by SDA Shivpuri, from the budget details document of 2009-10, we chose one that listed 37 women who undertook training to repair diesel pumps, at a cost of Rs 6000 per person (totaling Rs 2,22,000). I went to Baglon expecting to meet a number of married women, since the names on the list were prefixed with Shreemati (Mrs), but on meeting them, I realised they were all unmarried girls.

The girls were unaware of CCD, or any such scheme in their village. They said they had never received any sort of training and only learned about their inclusion on the list from us. One of them, Bhuli said she had dropped out of school after completing her 8th standard and was now primarily engaged in labour. Her father, Jamal Singh, stepped in and said that he too was unaware of how Bhuli's name was included in the list of beneficiaries.

Upon hearing that Rs 6000 per person had been spent this way, Jamal Singh said, “Faltu humare naam se koi kha raha hai, aisa nahi hona chahiye" (Someone else is grabbing the money in our name; it should not happen), and had he known about it, he would have objected to it. When asked what he thought would be the most suitable type of training for girls, he suggested examples such as tailoring or embroidery, as those skills would be more beneficial to them. He felt that repairing diesel pumps was not suitable work for girls. 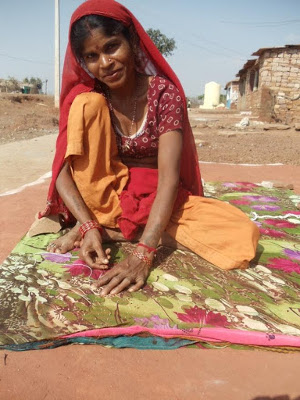 A Saharia woman doing embroidery. The training program should be need based, which it is not. Pic: Susmita Guru

The other village we visited, Udayapura is approximately 35 km from Pichhor. The beneficiaries list obtained from SDA, Shivpuri, showed that Rs 1 lakh was spent under the livelihood program during the plan period, and five people were established in small businesses (kirana dukan) with that amount. Budget details further showed that for this purpose an amount of Rs 20,000 has been spent on each beneficiary.

During our late afternoon visit, many villagers were found resting under a tree in the middle of the village. Asked about the whereabouts of the government-established kirana dukan, villagers laughed at our enquiry and said, "O to khatam ho Gaya" (those shops are finished now). We continued seeking more information about the program implementation and its impact on the life of poor Saharias. But clearly, it seemed we should prepare only for further bad news.

Any effort to identify beneficiaries of a public welfare program is usually carried out by the local administration and members of the gram sabha. This ensures that the benefit of the program reaches genuinely eligible people. We were told by officials from the district administration and the panchayat that it was the gram sabha that decided the beneficiaries of the current program. But the reality unearthed in Udayapura revealed a few alarming facts.

What happened with the five villagers here demonstrates that funds allocated under the program were being spent ambiguously and without following a specific criterion for identifying beneficiaries. The panchayat secretary, along with a few other officials, had come to Udayapura one day and asked villagers if they would like to take up any kind of small business (tum log kya dhanda karna chahate ho?). He explained that the government would support them financially. Many villagers declined the proposal, but five came forward and filled out the requisite form.

The villagers said that after about three or four months, the secretary came back and informed the five villagers that their request has been approved by the authority (Aap ki guhar manjur ho gaya). He further asked them to leave immediately for the SDA office, Shivpuri, and bring Rs 1000 to collect their cheques for Rs 20,000. The villagers were aware that such programs provided free benefits, but they accepted the deal. They did not suspect a problem, because for only Rs 1000, they would receive Rs 20,000. They somehow arranged to gather the required amount and leave for the SDA office, Shivpuri.

Upon their arrival, the villagers were told that their cheques would be issued to them after submission of the Rs 1000. The villagers were then directed to a wholesale kirana dukan to collect necessary materials for their shops. The helpless and dismayed villagers, now feeling cheated, were left with no alternative but to collect the materials from the shop, certain of more ordeals coming their way.

One villager, Sewa Ram said that he received very few materials, some bidi bundles, jaggery, tea, sugar, and gutkha, which he estimated were worth not more that Rs 8000 - not enough to establish a kirana dukan. Another villager, Bichhilal, was handed 25 pairs of garments for starting a garment shop. However, according to him, the garments were of very poor quality. When Bichhilal refused to take the cloth from the shop and asked instead for a refund of his Rs 1000, the shopkeeper replied that money once paid will not be refunded; and that Bichhilal was free to take the material or return home empty-handed.

A third villager, Sunni, said that she too received a few materials, such as glass bangles, a necklace, bindi, earrings, an anklet and toe ring to open an artificial ornament shop, which according to her were only worth about Rs 6000.

The other two villagers, who were provided materials for a shoe shop and a vegetable shop, could not be interviewed during our visit because they were away at work. However, we later learned that their stories were similar to the other three.

In all our search, only one person, Sewa Ram, felt that the program, although trivial, succeeded in changing his life. He said that even though he struggled a lot for nearly two years in his business, he didn't have to migrate in search of livelihood or work as a daily wage labourer during that period. However, he eventually had to close down the shop because he did not get any further assistance from the government. At present he is meeting his family responsibilities with daily wage work, he said.

Sunni reported that she barely managed to sell goods worth Rs 500, gradually suffered losses, and finally discontinued the work. Bichhilal said that he lost Rs 1000 and his business because he was unable to sell even a single cloth due to its substandard quality.

Asked about any visits by officials, the villagers said the panchayat secretary came one day soon after they received the support and took photographs of the five villagers with their materials. Since then, no one had come to see whether or not the shops were properly functioning.

Although the CCD Plan has a provision for monitoring the implementation of the program, there was no observable monitoring mechanism followed by the government. The national guideline for PTGs designates that 2 per cent of the total allocation is to be spent on monitoring, but the budget details of the 11th plan period did not show any amount spent on monitoring the program. Rigorous monitoring both by the government officials as well as the civil society organisations on a regular interval for at least one year after program implementation would reveal a lot of grim realities that remain unexamined.

Still a long way to go

Clearly, neither the government nor the intended beneficiaries have paid adequate attention to the program. The program is being taken for granted by those for whom money flows in every year and is spent without oversight.

In any case, providing money or materials is not the ultimate solution for these poor people. The government has to seriously re-think the program goals and understand the problems these people face, and then take necessary steps to help lift them out of their marginalization. Our findings from these two villages suggest that the government officials including district administration to Panchyat levels are involved in grabbing the money in the name of poor Saharias. And these poor people who have been suppressed for long by the local upper castes have no voice to fight for their rights.

Though the program has been running with the goal of bringing quality changes to the lives of Saharias, its key objectives are still to be accomplished. The assurance given by the Tribal ministry that at least some of the 75 government-designated PTG communities will be mainstreamed with the other Tribal groups by the end of the 10th plan period (Standing Committee Report, 2002) remains unfulfilled even after the end of the 11th plan period. There is a very large gap between the promise and the delivery of welfare that is needed to lift these desperate people out of their situation.

Susmita Guru is a social scientist at S M Sehgal Foundation. This report is a part of the research study undertaken by the author during 2013-2014 while she was working with the Indian Social Institute, New Delhi.

URL for this article
http://indiatogether.org/conservation-cum-development-program-good-only-on-paper-poverty