SOCIETY/CINEMA
From spirited festival to drab conference
When this social communication event hit Kolkata in 2002, the entire ambience spilled over with empathy and a deep understanding for films  documentary, fiction and docu-fiction  made on or about the marginalised and the oppressed. Very little of all that was in the air during the 2007 version, writes Shoma Chatterji.
20 March 2007 -

The 6th International Social Communication Cinema Conference ran between 15-21 February at Kolkata's noted cultural complex Nandan, set up by the government of West Bengal. This year marked its sixth birthday. Kumar Shahani, noted Mumbai-based filmmaker, who re-defined the form of cinema in his own way through films like Khayal Gatha inaugurated the Conference. Distinguished filmmaker Tarun Majumdar was the guest of honour along with Dr V K Rao, Director, Anthropological Society of India. Prof. Shyamal Kanti Sanyal, Vice-Chancellor of Jadavpur University, was Chief Guest while Antonio Pinna, Consul General of Italy, Kolkata, attended as Special Guest. Shahani was felicitated through a special screening of Khayal Gatha, an abstract, non-narrative film on the history, geography and evolution of the khayal style in classical music. 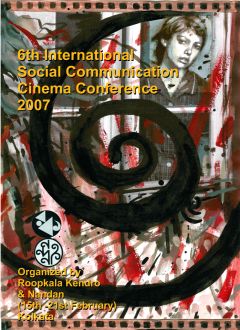 In collaboration with Nandan, the state-owned culture complex, the RoopKala Kendro (RKK), an NGO, organised the country's first ever-international festival of social communication cinema in 2002. The RKK organises the Conference annually in February. RKK defines 'social communication cinema' as 'cinema that is either a documentary or a real life story that relates to the largest sections of people.' In the Indian context, such people are essentially the common and the marginal. They comprise of people in the small and unorganised sector, disadvantaged groups like children and destitutes, under privileged working women and groups or agencies who work with them and with their problems.

"We are keen to explore the reason why the reality of the lives of the common and the marginalised do not find place on mainstream television. We hope this festival will open the eyes of the masses in the mainstream and the powers-that-be to give them a place under the sun," said the then-CEO and Director of RKK Anita Agnihotri, IAS, in 2002. Since her transfer, the reins have now been handed over to Professor Sanjoy Mukherjee, erstwhile professor at the Department of Film Studies, Jadavpur University. The word 'cinema' was replaced with the word 'conference' and that is how it stands today.

When this conference began in 2002, the entire ambience spilled over with empathy and a deep understanding for films  documentary, fiction and docu-fiction  made on or about the marginalised and the oppressed. It was a pleasant surprise to discover that a state-backed, autonomous organization took the responsibility of focussing on the marginalised people across the world, through screening films made about them, focussing on issues that concern them, their struggles, their failures and their triumphs. In that year, RKK defined the event as a 'festival' and not as a 'conference'.

Can and should any organisation, private or government-funded, run a film festival, sorry, conference without an audience? Is the money, manpower and time worth it?

From those spirited days, the picture has changed. The conference was not publicised at all; the press was poorly represented, if at all; the volunteers working at the reception had little knowledge of what was going on and did not respond to queries not because they did not want to but because they did not know; and the audience was hardly there in the morning and afternoon screenings. Also there too many old films were screened rather than new ones.

The screenings at the conference this year were classified into three sections. One comprised of narrowcast screenings that the organizers labeled participatory viewing. These films, both fictional and documentary, were micro-representations of micro problems through film and video that opened up space for necessary international, feedback and participation. The second section was broadcast, consisting of passive programmes that do not offer space for audience interaction and participation. The third was the general section broken up into films by the first batch of graduates from RKK and retrospective screenings of Italian, French and Spanish classics, a documentary on Prithviraj Kapoor, a tribute to New Theatres and two very good films from Tareq Masud, one of the best filmmakers from Bangladesh. 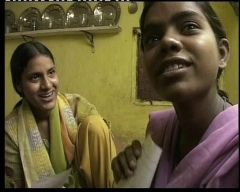 Still from Shazia, a short film by Arvind Sinha, about a young Muslim girl who lives in a shanty in Kolkata.

The narrowcast section, which screened some of the best productions from independent production houses, Films Division and the Public Service Broadcasting Trust (PSBT). One of them was Shazia, a short film by Arvind Sinha, about a young Muslim girl who lives in a shanty in Kolkata. She is the sole breadwinner of a family with a widowed mother, a sister-in-law whose mentally ill husband has gone away, and younger siblings. She teaches small girls and boys of a slum, gives private tuitions, runs her business in readymade garments and studies for her board examinations at night. Her singular aim is to educate herself for a better life. The film is a wonderful tribute to the spirit of the economically disadvantaged.

Among the other films that deserve mention in the narrowcast section are Harvesting Hunger, by Krishnendu Bose, that explores the lives of India's 300 million hungry people, whose human tragedy is escalating rapidly with the growth of market economy and the increasing corporatisation of agriculture; Fight for Survival by Dakxin Nandlal Bajarange that underscores the lopsided policies of activists concerned with the laws on prevention of cruelty to animals endangering the lives of three lakh members of the Madari community who earn their living as snake charmers in different pockets of Gujarat; Girls Can't Wait under PSBT directed by Usha Albuquerque explores around three or four involved NGOs that are doing excellent work in the field of girl's education; and many more. 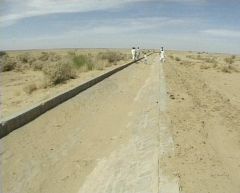 Still from Sanjay Barnela's Village of Dust, City of Water, that lucidly explains the use, abuse and misuse of water across the country where masses of people find it difficult to access plain drinking water.

For the viewings, RKK invited representatives to the conference from local government bodies in 18 districts in the State of which 12 responded. These 12 representatives were asked to choose films from the narrowcast section they would like to be screened in their respective districts. The objective is for these representative to choose films they would like the RKK to arrange for screening at the villages and districts to obtain a wider audience reach for dissemination of information and education to initiate change at the grassroots level.

The section drew a poor audience that averaged an attendance of 20 to 25 including the invited district representatives. Contrast this against an incident that happened at the same Nandan II a couple of years ago. The West Bengal CM himself withdrew Joshy Joseph's documentary A Day in the Life of a Hangman, on Nata Mullick, the man who tied the noose around Dhananjoy Chatterjee's neck, from the same theatre the day after screening began on the ground that the film drew a poor audience of 10 to 20. Yet, this year, for one whole week, Nandan II and RKK went on screening film after film after film to a near-empty hall built to accommodate around 150 people without even trying to attract a bigger audience.

RKK ought to have publicised the conference widely and at least three to four weeks before the conference was scheduled. People are interested. But how will they come if they do not know at all? It was mainly word-of-mouth that brought in the audience for the evening screenings of international classics. RKK's home productions in the meantime, mostly focussed on the Panchayat Raj in West Bengal villages, were unabashed propaganda of, for and by the state government.

Strangely, two serials from Bangladesh, namely Sisimpur and Sabuj Chhaya were screened in the narrowcast section. Sisimpur is a Bangladeshi adaptation of the US children's programme Sesame Street originally kicked off by a group of social workers in the US in 1969 as the first step towards children's education through television. USAID co-funded Sisimpur with Bangladesh's Nayantara Communications to start a Bangla version of the serial on April 15, 2005. Though Sisimpur was said to have been popular in Bangladesh, it is poorly directed, edited and acted. Sabuj Chhaya on the other hand, set against a rural backdrop, offered some tongue-in-cheek, direct pointers on issues like early marriage, family planning and other areas focussing on the health and education of women and children. But Sabuj Chhaya had already been screened at an earlier version of this conference so why the repetition?

The broadcast section screened rather shoddy serials and soaps from Pakistan, Vietnam and South Africa that aimed at infotainment but lost out on quality, aesthetics and even technical competence. The John Hopkins University Centre has produced the 26-episode Vietnamese serial, Beyond Love, with financial support from Atlantic Philanthropies and no Vietnamese production house was directly involved in the decision making process. Naturally, the serial is marked by a predominantly Western look, approach and perspective where episodes dealing with drug pushing and alcohol abuse appear like the amateurish work of a student film. The audience at Nandan III where broadcast section screenings took place was even worse. Yet, the lunchtime rush for free lunch coupons was visible everyday.

Understandably, the evening screenings at Nandan I, the biggest theatre in this three-theatre complex, drew packed houses every day. The Italian, French and Spanish retros were something freeloaders were not willing to miss out on. Vittorio De Sica's Bicycle Thieves, Federico Fellini's La Strada, Antonioni's La Notte, La Aventura and La Eclisee, Ken Loach's Land of Freedom, two landmark films of Robert Bresson and three films of Spanish filmmaker Carlos Saura were some of them.

But how many of these films fit within the bracket of 'social communication' defined by the Kendro itself? Can the private anguish of people in pain be called 'social communication'? Even otherwise, there is little reason for screening these films at this 'International Social Communication Cinema Conference' as they are screened over and over again at film society screenings in the city, at archival screenings at Nandan and are easily available for viewing at film clubs. The morning screenings at the same theatre drew a poor audience, as there were few takers. The afternoon shows fared a bit better because they screened the diploma films and the students of RKK itself were present. But how does this serve the purpose of the conference?

While one redeeming factor of this conference was that there were no gate fees for any of the screenings, even the festival souvenir showed signs of trouble. Though it proudly displays distinguished names that form the 'Souvenir Sub-Committee', it appears the members did not bother to go through the proofs resulting in a spillover of printer's devils that mar a brochure high on production values. Does the change in tautology from 'film' or 'cinema' to 'conference' make a difference any more? Can and should any organisation, private or government-funded, run a film festival, sorry, conference without an audience? Is the money, manpower and time worth it? Will not such a disorganised and unfocussed 'conference' make it a victim of its own wrong strategy, turning it into a 'marginalised' cinema conference?

Shoma Chatterji is a freelance writer based in Kolkata. She is the author of 16 books,including 'Kali - The Goddess of Kolkota' and 'Gender and Conflict'.

URL for this article
http://indiatogether.org/cinema-society