'Regularly' employed in Chingrajpara
Can the small-time retail shop's employee or the truck operator's handyman claim more job protection than his wage labour counterpart? In this sixth article in our SLUM DIARIES series, Ashima Sood notes that the labour law framework is no more a friend of the small establishment's employee than it is of the casual labourer.
13 July 2005 -

Bilaspur, July 2002: For most of Chingrajpara slum's denizens, earning a livelihood is a daily gamble. Each day the wage labourer, the hamaal, the rickshaw-puller and even the mobile vendor puts on stake his/her labour power and whatever capital is at his/her command in the hope that there will be customers willing to pay for the services on offer. To have an employer then and a job that will supply two square meals a day into the future without foreseeable disruptions seems then a luxury or a privilege, a prerogative sometimes even of status.

But too often it is a fraught privilege. Indeed the small-time employee of the retail shop that buys its wares off the Sanichari (the Saturday market) or the handyman of the truck operator that brings the Sanichari its supplies can claim only marginally more job protection than his casual labour counterpart. The labour law framework is no more a friend of the small establishment's employee than it is of the casual labourer. Instead, whatever job security is available to this worker stems entirely from the more fixed nature of labour demand. And the contingent benevolence of the employer.

I. The grocery shop assistant

Ask Vayu Kashyap. Some 15 days before I meet him it seems that he was asked to settle the month's accounts and leave his six-year-old job as shop assistant at a 'General' wholesale grocery shop not far from the Sanichari. And with that Vayu became one of the sad and invisible army of the urban unemployed. 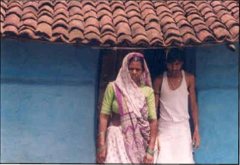 Vayu lives with his mother across from Raghuram Lodhi's hovel (Slum Diaries V). In no uncertain terms, he demands to be 'surveyed'. Soft-spoken and articulate in Hindi, Vayu has a story to tell and he is determined to tell it. From the authority and cynicism that tinges his manner, Vayu might pass for college-educated. In fact he had to drop out of school (the Government Multi-purpose (sic) Higher Secondary School, he tells me with some pride) after class nine. Though in his mid-twenties he looks, for all his assertiveness, no older than the mid-teens.

The house Vayu and his mother Angana Devi live in is a pucca, fairly neat and well kept three-room house with a yard in front. They came to Chingrajpara in 1989 and now own the patta (title) to their house. They have metered electricity supply and an air-cooler in one of the inner rooms. They do not own a television like most others in the basti but they have a transistor.

It was not always this way. A young Angana Devi accompanied her new husband from their native place near Kanpur and then saw him struggle with tuberculosis for sixteen long years till his premature death. To support herself and her son she rented a farm near Katiapara off the Arpa river bank. It was after she too was diagnosed with TB that Vayu had to drop out of school to help in the field and pay for her medication for the next two years. A few years later after she was recovered the landlord asked them to vacate the farm. Luckily, that was also when the trader through whom Vayu and his mother sold their produce mentioned an opening as shop assistant in a wholesale shop in Sanichari.

Despite the white-collar trappings of his chosen livelihood however Vayu continues to be trapped in the unorganized sector paradigm of poor pay, few benefits and absent job security.

Here Vayu worked for some five years, some twelve hours a day, six days a week from nine or ten o'clock in the morning to the same time at night. He started at Rs 500 monthly, earning yearly increments of Rs 50-100. When the owner transferred Vayu to his brother's General Store some distance away he was earning some Rs 800 per month. After five months on the job he was fired.

Vayu does not care to dwell on the reasons. 'No more need', he says his employer told him. Now Vayu is looking for work and has asked his friends, many of whom work in the upscale and air-conditioned Shriram New Cloth Market at Agrasen Chowk to look out for an opening for him. For all its air-conditioned comfort however Vayu knows that he would have to start at a lower monthly wage of Rs 500-600.

Their savings will carry them through a couple of weeks without work and Vayu claims to be hopeful of prospects. Indeed the next week when I visit the family, his mother says he has already found a position. The following morning however, I am told that the position did not work out and Vayu has gone instead to visit relatives.

It is clear that despite the poor earnings his white collar job afforded him, Vayu is not willing to consider the manual labour that is the mainstay of other slum residents. When asked to characterize their economic position in relation to the rest of the basti, Vayu describes it as 'medium'. This self-appraisal and perhaps the influence of his peers, many of them shop assistants and others in non-manual occupations shapes the set of livelihood options Vayu is willing to consider. When I ask about the path of self-employment that many of his neighbours pursue, Vayu is dismissive. It would be hard for him to finance a cart, he says and besides he is not really interested in working for himself. Too much tension, says he.

Despite the white-collar trappings of his chosen livelihood, Vayu continues to be trapped in the unorganized sector paradigm of poor pay, few benefits and absent job security. Indeed under the first National Labour Commission's (1966-69, Ministry of Labour) definition, 'Employees in shops and establishments' fall within the rubric of this unorganized sector. The legislative protection that is supposed in theory to be extended to these groups, including the Minimum Wages Act, 1948 or the Contract Labour (Regulation & Abolition) Act, 1970 exists in a vacuum - sans enforcement apparatus.

The case of Roopchand Gandharv could not be more different. A father of four, Roopchand is wizened and unlettered, a reluctant interviewee. But he too can lay claim to a 'regular' employment status - for a daily wage of Rs 50 plus meals, he travels everyday as the conductor's assistant or 'whistle-blower' on a privately operated bus110 km to and from Bemtara, near Sambhalpur in Durg district.

The hours are strenuous - 6 am in the morning to 10-11pm in the night. For Roopchand who had a severe case of backache as recently as last year, it is a physically taxing job. There are days when he is unable to get up and go to work. Under his unwritten contract, however Roopchand is paid only for the 20-25 days a month he is on the job. It is a fair arrangement according to Roopchand  his employer Jhule Lal, who is the owner of some eleven buses, does not want to encourage his employees to stay at home.

Roopchand has been working for Jhule Lal for nearly seven years now and has had his share of 'raises'. He had started at a daily wage of Rs 30. Before that he was a helper in a truck, earning Rs 600-700 per month. But despite the raises, Roopchand's earnings are far from sufficient to raise a family of four and support his wife Rukmini's aged mother. Their shack bordering Rokando has neither metered electricity nor a water connection and has been mortgaged besides to pay for Roopchands treatment for last year's back problem. They have been repaying the amount of ten thousand they borrowed then from a moneylender.

Roopchand's hopes now centre on his seventeen-year-old son, Deepak who dropped out of school after class seven to apprentice as a motorcycle mechanic at a shop near SECL for nearly three years. Deepak's monthly Rs 600 earnings go to service the loan.

Despite this second source of income, all is not well. Roopchand's wife Rukmini confesses that sometimes on days when Roopchand misses work, and there are a few every month, there is no food in the house. The three kilo of rice twelve-year old Roshni and eight-year old Suraj sometimes get from school is on those days their lifeline.

While estimates of the unorganised sector workforce range from 91-93 percent of India's workforce, an estimate compounded by definitional confusion, it is indisputable that upwards of 90 percent of Indian workers fall in this category. Yet social security schemes such as provident fund, pension, medical benefits, or disablement benefits have largely been targeted at the 8 per cent of workers in the organized sector through employers. As Roopchand's case shows however it is the unorganised sector where one medical setback is often all it takes to disrupt the fragile economic status quo of a whole family.

The Tenth Plan document claims that a 'budget-funded social security system similar to that available in developed countries is not feasible for India at present'.

From a policy perspective reaching this vast pool of workers presents informational issues of tremendous magnitude. Specifically, how to get these workers counted and registered is the challenge. Some researchers such as P Madhava Rao* have suggested that the mandate of the existing social security apparatus such as the Employees Provident Fund Organization and the Employees State Insurance Corporation be extended to the unorganised sector to implement a nation-wide contributory social security scheme, focusing on pension and medical coverage. Rao also points out that as presently framed the Employees Provident Fund and Miscellaneous provisions Act and the Employees State Insurance Act are not applicable to small establishments and a variety of service industries. He recommends removing these legislative barriers to improve the state's ability to target workers in the unorganised sector.

The Tenth Plan document on the other hand focuses on building skill and training initiatives in the informal sector to improve productivity and income levels of workers. It also suggests the 'involvement of the insurance industry' in providing group insurance in small establishments. In keeping with an overall market-friendly approach, it claims that a 'budget-funded social security system similar to that available in developed countries is not feasible for India at present'. Instead it envisages cooperatives, self-help groups and other voluntary arrangements for protecting unorganised sector workers. While it agrees that medical and coverage must be reached to the poorest possibly through existing institutions such as Employees Provident Fund Organization and the Employees State Insurance Corporation, it simultaneously argues for reducing the paperwork burden on small scale enterprises.

The retreat from the state's primal role in protecting the rights and livelihood of unprotected workers like Vayu and Roopchand is evident and worrying.

Ashima Sood is a graduate student at Cornell University, New York. Names have been changed to protect the identities of the individuals in this article. The author wishes to acknowledge the people of Chingrajpara for sharing their experiences, and ActionAid and its Chhatisgarh team for making this work possible.

URL for this article
http://indiatogether.org/chingpar6-economy