URBAN TRANSPORT
Ahmedabad takes the bus
While other cities in India are planning new Metro systems to address their transport woes, Ahmedabad has thrown its weight behind Bus Rapid Transit instead. And given the may advantages this enjoys over rail - cost, potential, flexibility - it may prove to be the wiser choice, writes Madhav Pai.
17 May 2006 - 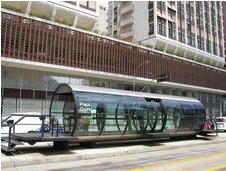 URL for this article
http://indiatogether.org/brts-economy